Il mountain range of Ida (Idi) dominates the centre of Isola di Creta, occupying much of the prefectures of Heraklion e Rethymno, and dividing Crete into eastern and western. The highest peak of Ida is Timios Stavros with an altitude of 2,456 m. This is where the homonymous church is built of dry stone. The mountain range has four other peaks that exceed 2000 m, Agathias (2,424 m), Stolistra (2,325 m), Voulomenou (2,267 m.) and Koussakas (2,209 m.).

In general, Idi o Psilorite offers abundant geomorphological variety. The southern and southwestern slopes are steep and rich in gorges, caves, precipices, valleys, while the northern ones are smoother and easier to cross. The high peaks are covered with snow for about nine months a year (October ? June) and otherwise remain bare, with only low shrub vegetation. At an altitude of 1600 m. frigio and maki prevail, but the southern slopes are covered by pines, cypresses, maples, oaks, pine cones. Once upon a time, the mountain range was overgrown with forests which is where the name “Ida”, meaning “forested mountain” comes from. The name Psilorite came much later. 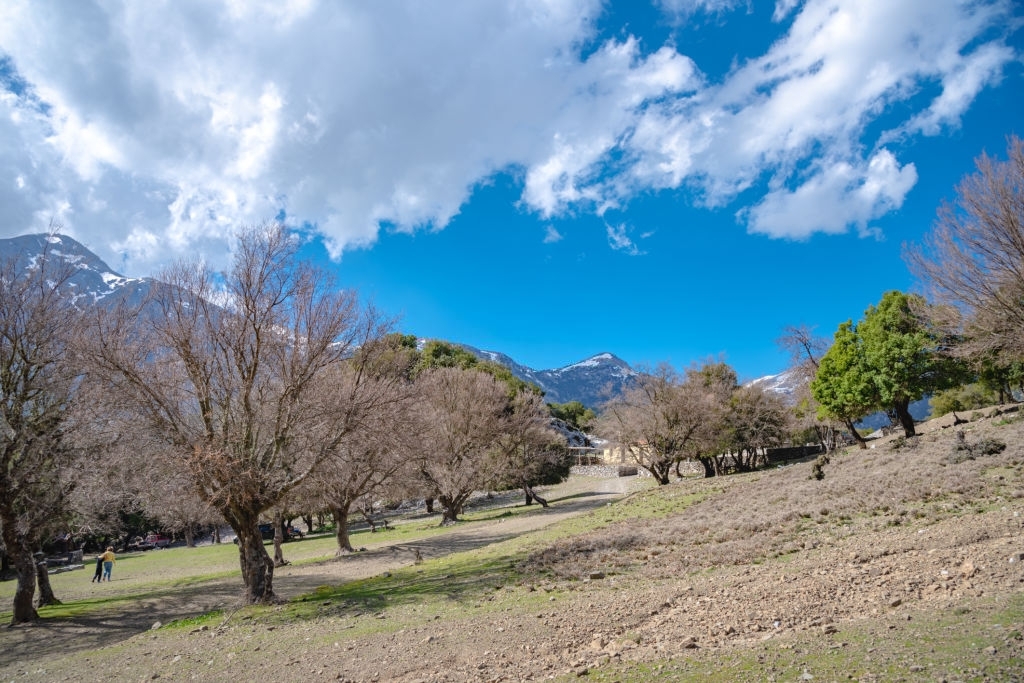 Human intervention stripped most of the mountains of the forests but the ecosystems of Ida are still of great importance. According to research by the Museum of Natural History of Crete, here live more than 70 species of rare or endemic plants, but also quite rare and protected animal species. The mountains are also the territory of a large population of vultures, hawks, hornets, but also the rare Cretan wildcat. One of the most important ecosystems is the Foresta di Rouvas on the southeastern slopes of Psilorite, where prinos, Cretan maples and the ?Cretan cephalopod?, an endemic species of Cretan orchid, thrive. For all these reasons, Psilorite has joined the Natura 2000 network and has been included in the European & Global Geoparks Network.

Ida also played an important role in mythology. Here Rhea hid her son Zeus, who was raised by the Coriti e Amalthea nel Ideon Andron Cave. On this mountain also, according to Homer, Minos received the laws from the gods and the Goddess Demeter flirted with Isaiah, the fruit of whose relationship was Pluto. Apart from the excavations in the cave of Ideon Antron, an important archaeological site is Zominthos, at an altitude of 1200 m. Following the Anogia – Ideo Androu road, about 10km in, an important Minoan building has been excavated in relatively good condition. According to several archaeologists, Zominthos was a station on the route from Cnosso a Ideo Cave and was of great economic importance as it collected mountain products (timber, wool, etc.).

Other points of interest are the mountain villages of Mylopotamos with the capital Anogia, the Skinaka observatory that can be visited on certain days of the year, the cave of Sfentoni outside Zoniana and the gorge of Agios Nikolaos (Rouvas). As for the peaks, access is possible through marked paths with easiest to follow those of the E4 that passes through the altopiano di Nida.

The forests and caves of Psilorite have always provided shelter to militants and civilians in the various liberation struggles that the island experienced, both during the Turkish occupation and during the German Occupation. In fact, in the winter of 1867, the women and children of Messara stayed in the Foresta di Rouvas under extremely challenging conditions.

Today, the inhabitants of Psilorite are mainly engaged in animal husbandry. An integral component of the landscape of Ida are the mitata, the characteristic stone-built seasonal dwellings of the shepherds that are scattered in Psilorite and, in particular, around the Nida plateau.