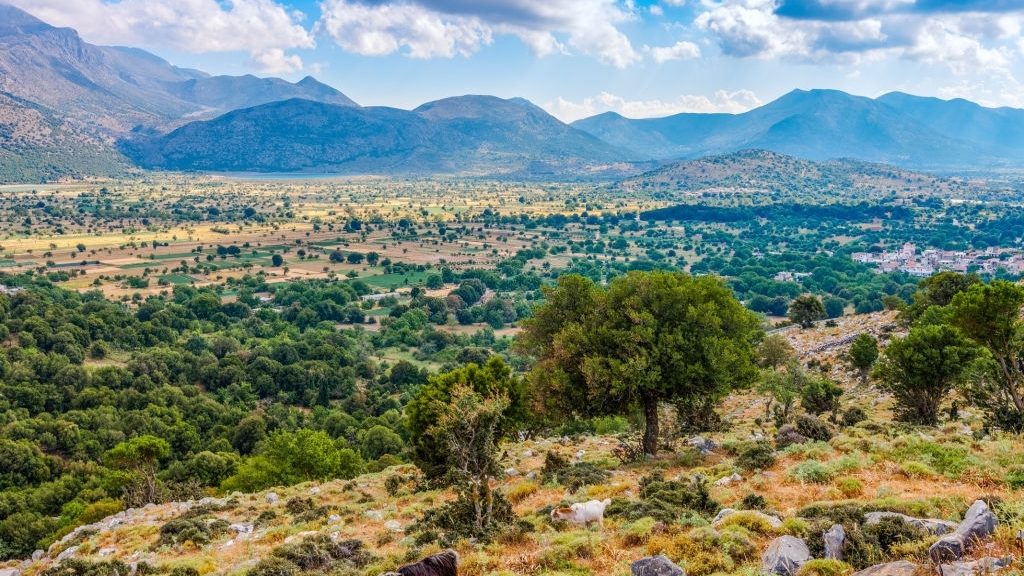 Il Dicte mountain range (noto anche come Lassithiotika Ori) takes up a good part of East Creta. It spreads out wide over with its steeper slopes on the south side; the other flanks are less precipitous. The gorges tend to be associated with the steep southern side.

At its centre is the upland Lassithi plain ? the largest on the island, which is framed around a large number of peaks between 1500 and 2148 m in height.

The southern section of Dicte merges with the Viannos region where there are some impressive geomorphological formations and the steepest slopes. One can single out the upland plain of Omalos at Viannos, the forests of Syme and Selakanos to the east and the most impressive gorges that cut through the region. Further east again is the plateau of Lapathos from where runs the gorge of the same name ? a most fitting destination for those keen on ?canyoning?. The east part of Dicte holds the Altopiano del Katharo, around which rear the peaks of Lazaros (2066 m) and Tzibi, beneath which start the Gorge of Kritsas, which runs down to the traditional village of that name.

Most of these mountains have sparse vegetation cover, chiefly of the frigio sort (a plant family made up of undershrubs ? aromatics and thorny species, unpalatable; called garigue elsewhere), with clumps of oaks. The region is covered with snow in winter. For mountaineering addicts, the montagne di Lassithi are the most attractive on the island; the mountain trails are many, and of varying degrees of difficulty.

The E4 European Walking Trail descends from Lassithi, starting on its western flanks, goes through the Limnakaro plateau, up to the refuge hut (at 1350 m), and ascends the two highest peaks of Dicte ? the Afendis Christos (Lord/Master) and Spathi peaks (Sword). The latter has climbing trails and is also suitable for ice-climbing. According to Greek mythology, Zeus was born and raised in a cave in the Altopiano di Lassithi now named Diktaion Andron. Another version of the myth places the cave close to Mount Idi (Psiloritis) where another cave, Idaion Antron, is also open to visitors.