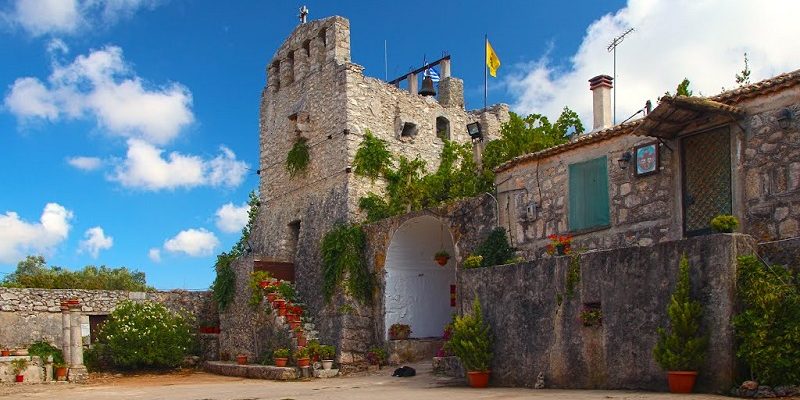 The church of Panagia ton Myriokefalon nel villaggio di Myriokefala was the katholikon of the monastery of Panagia Antifonitria in the 11th century,  which no longer survives. The monastery was built by Saint John the Stranger (Xeno) and was active until the beginning of the 20th century.

Secondo la leggenda, Saint John was walking in the area when a huge plant blocked his way. As he went to set it on fire, he noticed the icon of the Vergine Maria. This was the location he chose to build the monastery. During the Venetian period, the monastery enjoyed a period of prosperity and wealth, however, it was destroyed during the Turkish occupation like many other monasteries on the island. Similarly, it was active during the struggles for liberation and housed rebels and resistance fighters.

Aside from the katholikon, the other buildings are from the 18th and 19th centuries. The katholikon belongs to the architectural type of the free cross with a dome, with blind arches on the antennae of the cross. The cylindrical dome has eight arched windows with double arches. Later, the katholikon was extended to the west, with the addition of a vaulted one-room section, with two blind arches. The frescoes of the church are of two layers, dating back to the 11th and the 13th century. It is believed that the image of the Virgin Mary in the temple is miraculous. Today it is the parish church of the village. As for the ruins of the monastery, some efforts have been made to restore some buildings and cells but they are still ongoing.

One can reach the monastery on the way to Frangokastello and the southern coast or when visiting the area of Argyroupoli. Previously known as Lappa from the ancient city that stood there, the village of Argyroupoli is full of traces of modern and ancient civilizations. The springs of Argiroupoli and the small waterfalls complete this idyllic scene where visitors come to enjoy a meal and the natural landscape. The distance from Rethymno is about 30 km. This is an unknown and remote area of the island, where few visitors venture into.