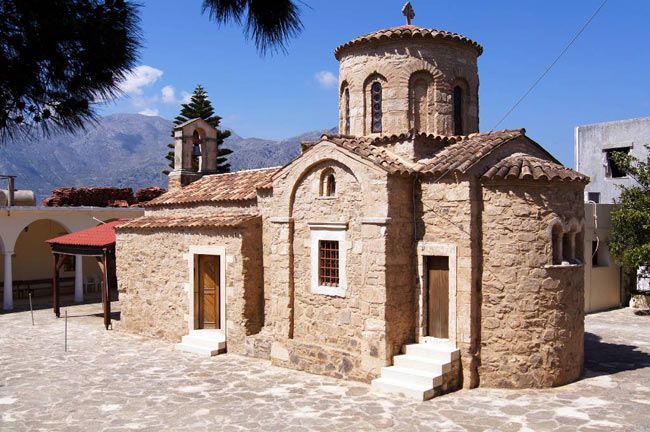 The church of Panagia ton Myriokefalon nel villaggio di Myriokefala was the katholikon of the monastery of Panagia Antifonitria in the 11th century, which is no longer saved. This monastery was built by Saint John the Stranger and operated until the beginning of the 20th century. Apart from the katholikon, the other buildings are from the 18th and 19th centuries.

Il katholikon belongs to the architectural type of the free cross with a dome and blind arches on the antennae of the cross. The cylindrical dome has eight arched windows with double arches. Later, the katholikon was extended to the west, with the addition of a vaulted one-room section, with two blind arches. The frescoes of the church were built in two layers, one during the 11th and one during the 13th century. It is also believed that the image of the Virgin Mary in the temple is miraculous. Today it is the parish church of the village. As for the ruins of the monastery, some efforts have been made to restore some buildings and cells.

The name of the monastery, Antifonitria, translates to “She Who Retorts or “Shouts” and is dedicated to the Vergine Maria as are most monasteries in Crete. You will also find it referred to as Myriokephala Monastery. A partire da Rethymno, the monastery is only a 30 km distance away and will take you through the springs of Argyroupoli. This is a great village to stop in for a few hours, dine in one of the local tavernas and enjoy the sound of running waters and a refreshing atmosphere. There are various other cultural and archaeological sites of interest and the E4 European long-distance trail also crosses through this area. North, closer to the coastal town of Georgioupoli, you will find a plethora of beaches as well as the Lake of Kourna for a different kind of swimming experience.