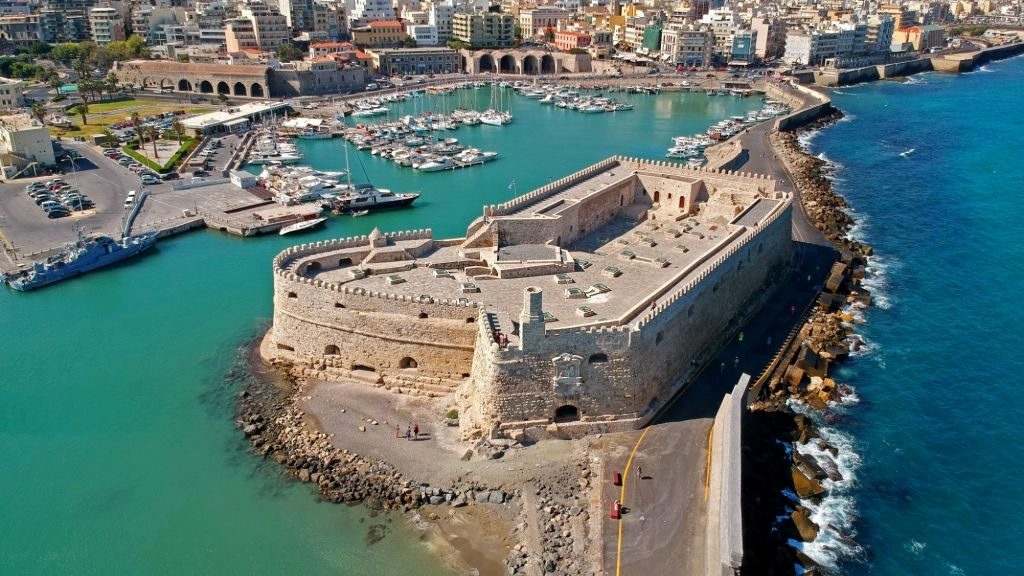 The area of Vathianos Kampos is located 15 km east of Heraklion. This expanse of land takes its name from the Vatheiano River, which flows through the plain in the winter towards the beach. There are two settlements here, Epano/Upper and Kato/Lower Vatheia that lie close to each other. The beach of Vathianos Kampos is one of the most well known and popular on the north coast of the Heraklion prefecture.

The westernmost part has taken its name from a local hotel called Arena, and is where you will find sunbeds, showers, changing rooms and water sport activities. Here you will also find a lifeguard, a beach bar and a court for volleyball. In contrast, the east section is more suited to those seeking solitude, there are no amenities, and it is free for visitors to use as they please. The beach is sandy, with rocky outcrops at its edges, and is open to the strong northerly winds. Access is by road, along the Old National roadway from Heraklion east to Agios Nikolaos, but a regular daily bus service also will get you there (the Malia / Agios Nikolaos route, on to Ierapetra o Sitia). Right by Arina resort, there is a small peninsula, on one side of which we find the small cove of Agii Theodori. The beach is popular with visitors from nearby hotels, sandy and generally busy. On the other side, there is an old Minoan shipyard that is open to visitors. This is a great spot to watch the sunset and walk around.

In addition to Spiaggia di Arina, you will encounter some other smaller sandy beaches as you travel east. To reach these, one must turn left off the Old National road down and navigate through the side-roads ? the beaches are not visible from the highway. Various hotels and restaurants line the space between the road and the coast. In general, this is an area full of hotel resorts, shops, tavernas, cafeterias and bars so you are never too far from anything. If you carry on east along the north coast, you come to Kokkini Hani, which offers two more stunning and popular beaches.