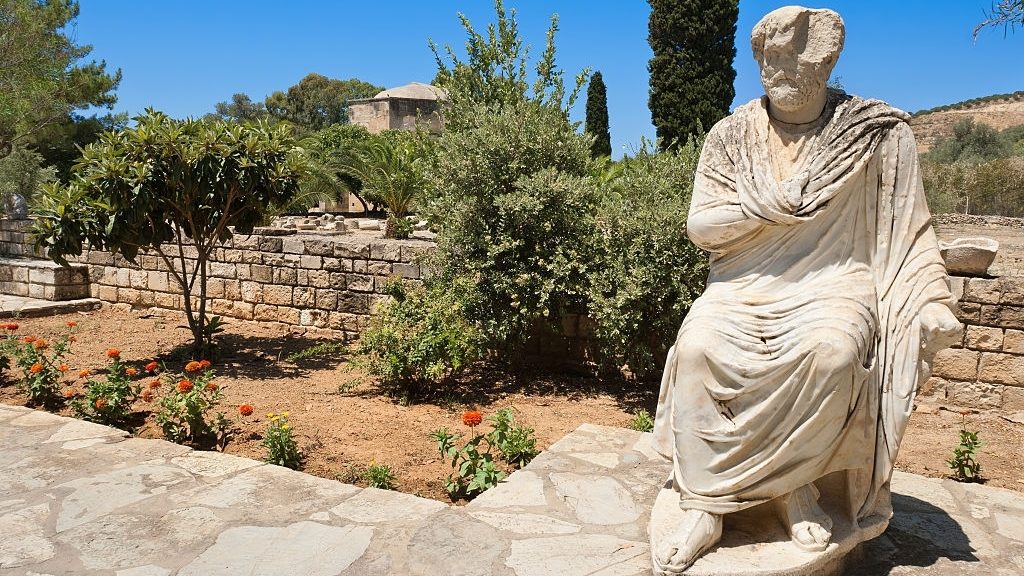 The archaeological site of Gortyna is located near the present-day village of Agii Deka, very close to the river Mitropolianos (known as Litheos, in Antiquity), in the Messara region.

One of the most powerful ancient cities of prehistoric Crete existed there. The ruins of ancient Gortyna cover an area of 4.000.000 square metres, from the hills of Ai-Yiannis, di Volakas e Profitis Ilias to the north, as far as the village of Agii Deka to the east, and Mitropoli village to the south. These ruins occupy a 2-kilometre long quadrangular area. This makes this archaeological site the biggest in Creta, and one of the biggest in the whole of Greece.

In the main section of the site, one can see the Roman Odeum (Ode?on), the so-called Great Inscription, which bears the Law Code of Gortyna, and an Early Byzantine church of St. Titus (Agios Titos). In the Sculpture Gallery, which is situated next to a refreshment stall, one can admire the Roman sculptures unearthed at Gortyna. The region of Gortyna has been continuously occupied from the Neolithic era (5000-3300 BC) until today. In the Minoan period, a rather insignificant settlement is believed to have existed there.

During the Geometric years (10th-8th century BC) the citadel of Gortyna was fortified, and the original foundation of the urban sphere was created, surrounding the temple of goddess Athena. From the 8th century, the city expanded towards the south, covering the foothills and the sides of the northern heights, and the banks of the river Litheos. The agora, which was the centre of all political activity in ancient Gortyna, was created later. At the same time, small settlements started to appear in the plain to the south, where the sanctuary of Pythian Apollo (Pythios Apollon) was situated. In the Archaic period, a second centre was added to the city, which was dedicated to Apollo, its patron god. 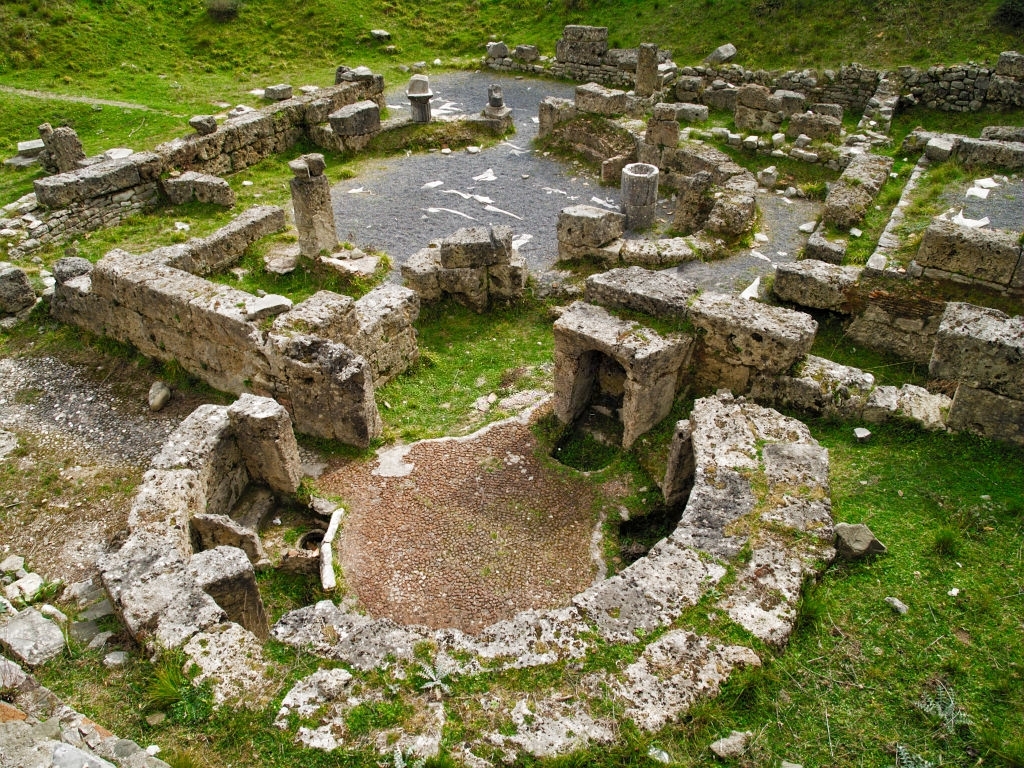 During the Hellenistic period, Gortyna grew and prospered even more. A second agora was created east of the temple of Apollo, and a sanctuary of the Egyptian deities Isis, Anubis and Serapis was also established. A large square connected the two parts of the city (old and new), and the initial urban nucleus, on the northern elevation, was fortified. Gortyna also had a stadium and a gymnasium. The nearby cities of Phaistos, Syvritos, Matala e Lebena became mere neighbouring dependencies and ports of Gortyna. According to Mitologia greca, quando Zeus reached the shores of Creta in the form of a white bull, carrying Europa, the daughter of the king of Phoenicia, on his back, he first went to Lebena, and then he went on to Gortyna. There, Minosse e Rhadamanthus were conceived under an evergreen plane tree, near the river Litheos.

Near the end of the Hellenistic era, Gortyna governed over the whole of south-central Crete, and part of the region of Rethymno. Gortyna and the town of Axos competed for supremacy over the Ideon Cave (Idaion Andron). The fact that the first silver coins of Crete were minted in Gortyna (470 BC) is indicative of its wealth and power. It was the most populous city of Crete, with 35-40.000 inhabitants, and 5.000 mercenaries. It is also believed that Gortyna was considered one of the best-governed città di Creta; this is strongly suggested by the so-called ‘Great Inscription‘, a summary of inheritance law, family law, and civil procedure law which was found on the site. 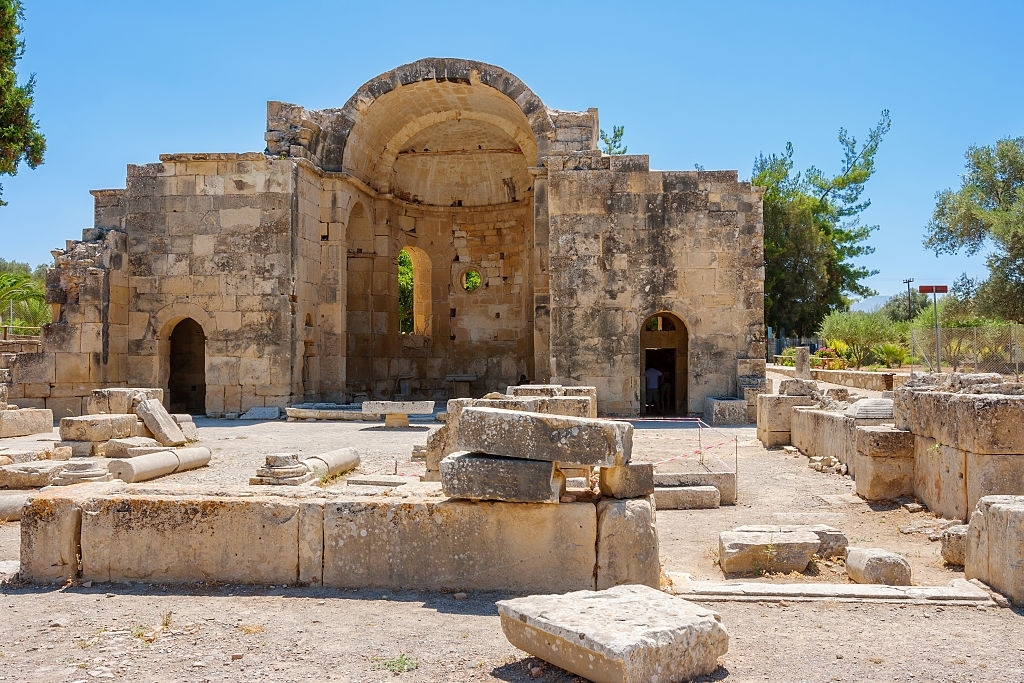 The famous poet, musician, philosopher and legislator Thaletas (o Thales of Crete), who lived in the 7th century BC, originated from Gortyna. It is believed that he introduced the writing and reciting of paeans, as well as the performance of armed dances, to the Spartans. When the Romans invaded Crete, Gortyna sided with the conquerors. This was in contrast to most other Cretan cities that with Knossos as their leader, put up resistance and were consequently destroyed. After the conquest, Gortyna became the capital city of the Roman province of Crete and Cyrene and enjoyed great prosperity. A construction spree took place in the city; new districts were built, as well as a majestic praetorium, a large circular theatre, a new agora (the third one in Gortyna) and a hippodrome, which is unique in Grecia.

Later on, during the early Christian years, Gortyna was the first Cretan city to welcome the new religion. The nearby village of Agii Deka (= Ten Saints) was named after ten early Cretan Christians who were martyred in Gortyna, in 250 AD. The Apostle Titus was appointed bishop of Crete (based in Gortyna) by L'apostolo Paolo and undertook the task of disseminating the Christian religion throughout the island. In the 6th century AD, the Metropolitan church of San Tito was built, the ruins of which can be visited today. The Saracens put an end to the long history of the city, in 828 AD, by destroying Gortyna and slaughtering Bishop Cyril inside the citadel.