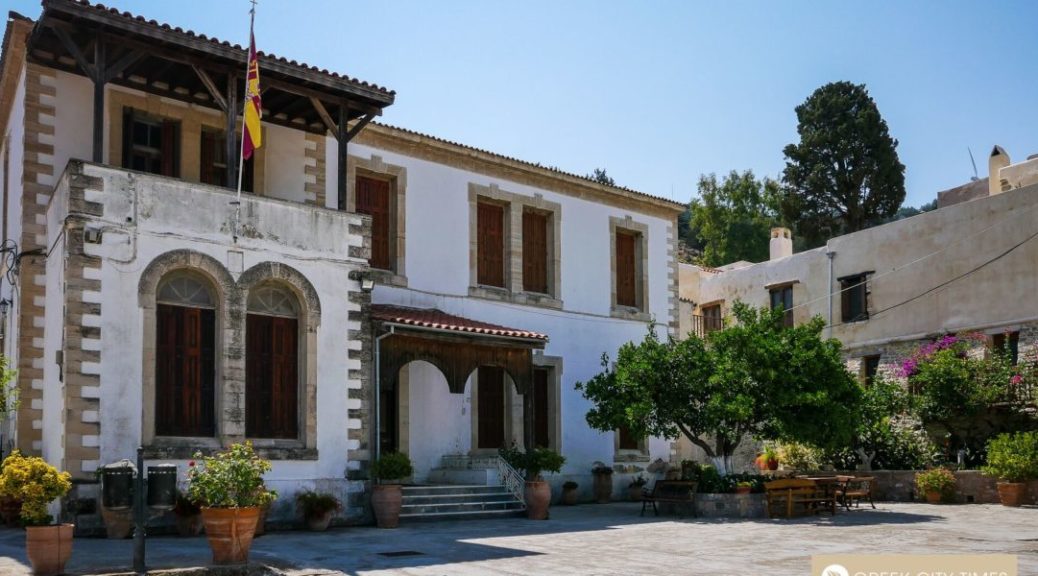 This is one of the largest and richest monasteries on Crete. It flourished during the era of the Ottomana rule and is dedicated to San Giorgio. The structure of the monastery is reminiscent of 17th-century secular Cretan architecture with independent cells, built next to each other.

The Refectory and the priory are located west of the church. The surviving manuscripts, dating back to the 18th century onwards, prove that this was the greatest period for the monastery, during which it was one of the premier intellectual centres of the island. During the revolution of 1821, 18 monks were killed and the monastery was abandoned, before being rebuilt during the era of Egyptian rule. Visitors will also have the opportunity to visit the small museum of religious art that spans two floors and is considered one of the best and most noteworthy. Here you can see religious icons, holy relics and manuscripts from the 18th century containing both texts and exceptional illustrations. The great number of monks at the monastery confirm the impressive monastic tradition of Crete.

This region of Heraklion is known for wine growing and as such you will find several great wineries nearby. You learn more about the local varieties and their method of cultivation as well as Cretan winemaking tradition. The distance from Heraklion is less than half an hour and will take you right outside the village of Choudetsi that is worth stopping in. Here, a music workshop operates with an exhibition of traditional musical instruments from around the world. It is the only museum of its kind in Greece and includes rich collections that illuminate the most representative traditional music, from antiquity to the present day. You may also want to stop at the village of Kato and Ano (Upper) Archanes. This is one of the most flourishing agricultural settlements of Greece with deep roots in Minoan antiquity and a great winemaking tradition.