On the northern coast of the isola di Creta, after leaving Sitia following the east road towards Vai e Zakros, after approximately 7 km you will come across the beach of Agia Fotia. Here we also find a settlement of the same name. It is small, not organized, and relatively deserted and it has taken its name after the small church of Agia Fotini. While not one of the popular swimming spots in the area, it is sandy and ideal for diving and snorkeling. The rocky seabed offers exciting underwater exploration for those that do not want to simply lounge on a sunbed. Yet, if you don’t mind the lack of amenities the area is a perfect spot to relax away from the crowds. As with most beaches on this side, it is open to the north winds. A large cave is found on the beach, which according to archaeological evidence, has been used since antiquity. 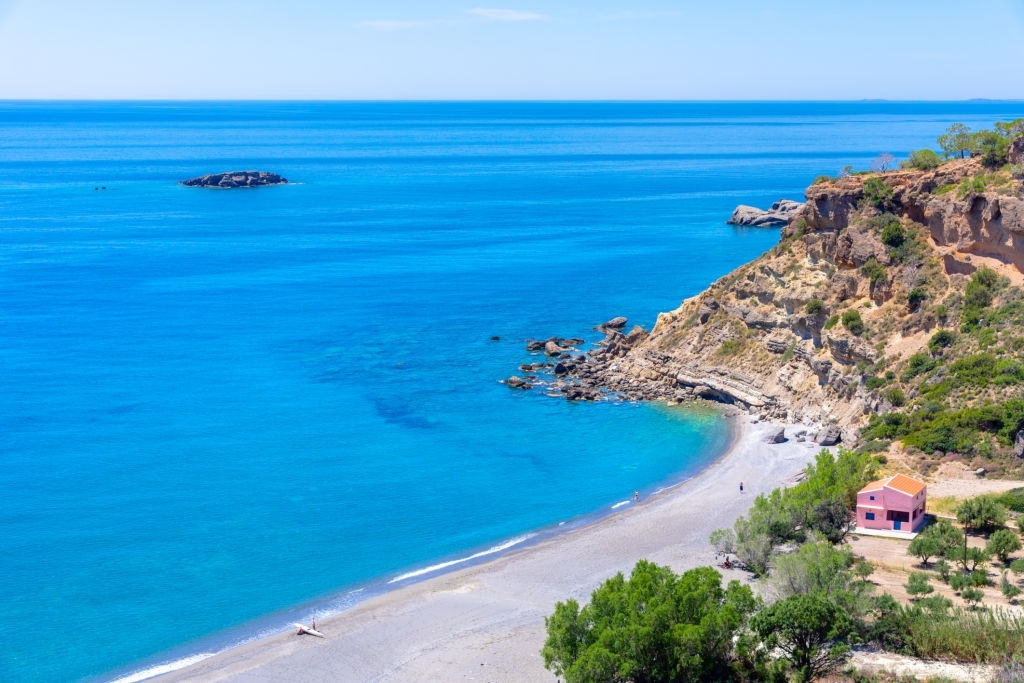 Close to the village, we find a variety of hotels, rent-rooms, and apartments if you decide to spend your holidays here. In this spot, the largest cemetery of the early days of the Minoan period has also been excavated as well as other important findings. Driving east, you will find smaller bays that offer privacy and calm waters to unwind and cool down like Kala Nera e Analoukas.

While in the area, don’t skip Moni Toplou, a historic monastery, built in a wild and deserted spot some 10 km to the east of Sitia. It is one of the most beautiful monasteries on the island, with its bell tower some 33 m high. The monastery also offers wine tastings from their organic vineyards and is known for its excellent quality produce. From here, the stunning beach of Vai is only 10 minutes away, and worth experiencing for any visitor to Eastern Crete. The beach is home to the largest palm forest on the island and Europe in general and is a protected ecosystem. Close to Spiaggia di Vai we also find Psili Ammos which offers more privacy and attracts freedom campers and nudists. The distance from Agia Fotia a Spiaggia di Vai is less than 20 km and takes about half an hour.