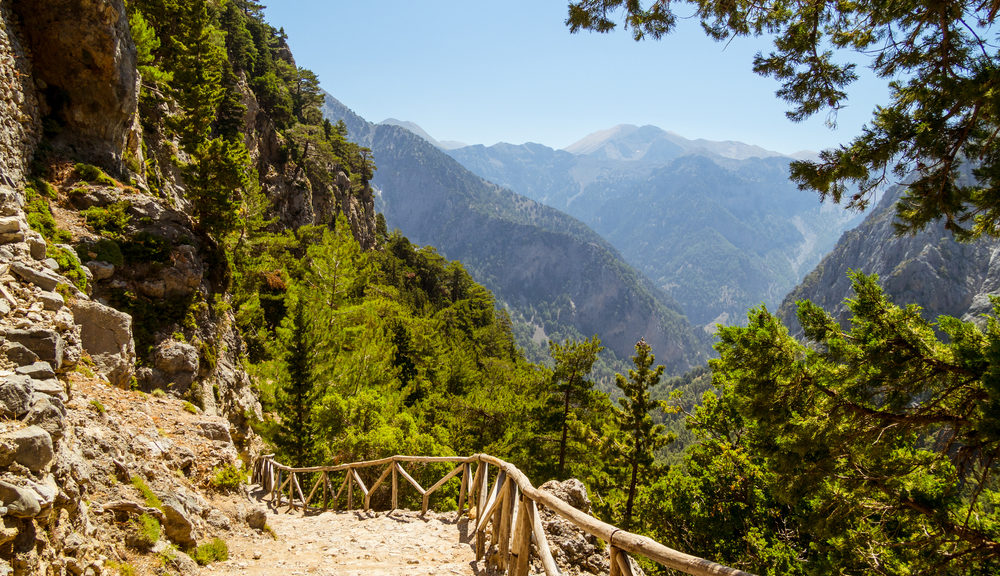 Samaria Gorge is the longest and one of the most imposing gorges in Europe. This is perhaps the most popular trekking path of Greece and visited by thousands of people each summer. It has been designated as a Protected Monument of Nature, by the European Council, and it is one of the most important National Parks in Crete and Greece.


The gorge is 18 kilometres long and its width varies between 150 m and 3-4 metres at its narrowest point, which is known as Sideroportes. In the past, the gorge often served as a refuge for local people, who would run to it to escape the killings, during periods of foreign occupation. In 1770, thousands of local women and children fled there after the Daskalogiannis Revolt.

The hike down the gorge begins at Xyloskalo, in Omalos (at an altitude of 1.200 metres). Most choose to start quite early in the morning, since it requires between 4-8 hours, depending on fitness level, walking pace and how many photographs you stop to take. On average, six hours are enough for those who wish to enjoy the route without being in too much of a hurry. On the downhill path that begins at Xyloskalo, you will start the awe-inspiring descent deep into the gorge, towards the watercourse. In the beginning, the stream bed is on the right-hand side of the walker, however, one will have to cross it several times along the way. The walk down the path, until the location of Neroutsiko, takes approximately 40 minutes. There, the path becomes less steep. Walking down the Samaria gorge, one discovers a varied landscape, with water springs, pools and impressive large rocks lying in the watercourse, as well as numerous trees, such as plane trees, pines and cypresses. 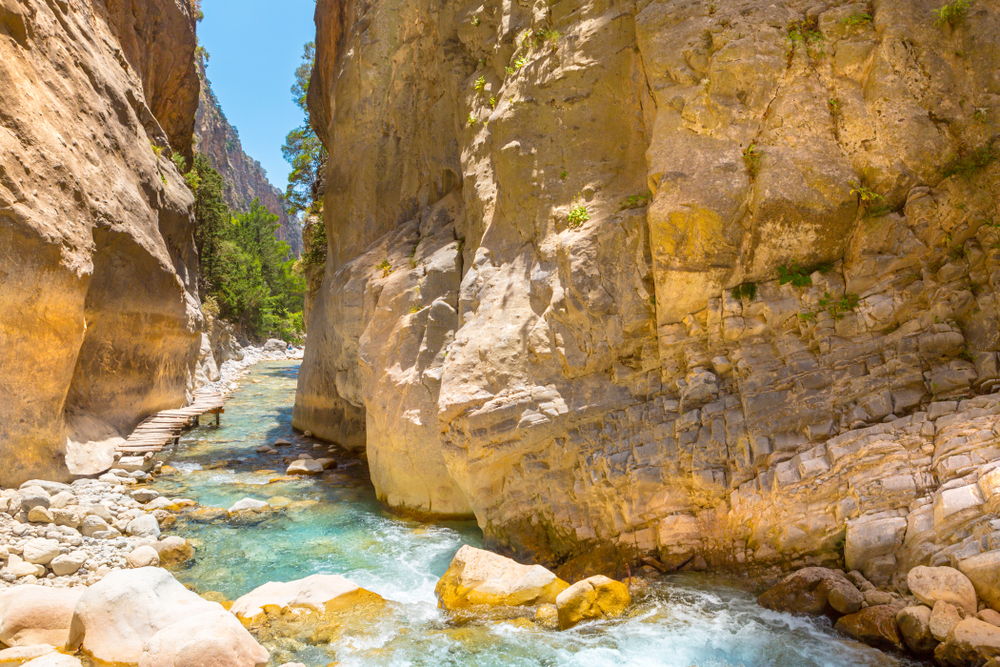 In antiquity, cypress timber cut in the gorge was exported to Egypt. Indeed, a whole “industry” is believed to have operated here, in order to provide the necessary material for building the Minoan palaces. Trees and deciduous oaks rooted on the highest cliffs, ineffable scents of herbs and the occasional Cretan wild goat (kri-kri) climbing on a steep slope (for those who are lucky enough to see it) make the trek through this gorge unforgettable. Hundreds of species of flora and fauna (some of which endemic) are to be found in the National Park of Samaria. About one kilometre after Neroutsiko, the Rίza Sikias (= fig tree root) water spring can be seen. After approximately another 30 minutes, one reaches the chapel of Agios Nikolaos, which is surrounded by huge cypresses. The ancient town of Keno is believed to have existed here. According to Mythology, Keno was the birthplace of the goddess Vritomartys.

From this point and on, the gorge narrows. Approximately 4 kilometres further down one reaches the settlement of Samaria, which was evacuated in 1962 when the gorge was pronounced a National Park. Walking uphill for a short distance after the village of Kato Chorio, one can visit the chapel of Osia Maria, to which Samaria owes its name.

Further down, one passes by a location named Tis Perdikas to Nero (= water of the partridge), where a water spring is to be found. About one kilometre after that, Kefalovrisia, a spot characterised by its enormous plane trees comes into view. According to Greek legends, the water that springs from the roots of these plane trees supplied the shrine of the Oracle of Apollo, which existed in the area. Next, one passes by the chapel of Christ (Christos) and arrives at one of the most impressive parts of the gorge, the famous Sideroportes (= Gates of Iron, also known as Portes = gates). This is the narrowest point of Samaria gorge, where the vertical walls stand towering up above. Here, with a little bit of luck, you may spot a Cretan wild goat, perched high up on the precipice. After Portes, the landscape evens out a bit and the watercourse begins to widen. Entrance tickets are re-checked at the outlet of the gorge, to make sure that no one has been left behind or decided to camp inside the gorge.

The last section of the walk often proves to be the most challenging. The gorge is behind, but the heat is becoming hard to bear, and fatigue takes over. Fortunately, the Libyan Sea is now close-by. Accommodation is available in Agia Roumeli. There is also the possibility to take the boat that goes to Loutro, Chora Sfakion, Sougia or Paleochora.