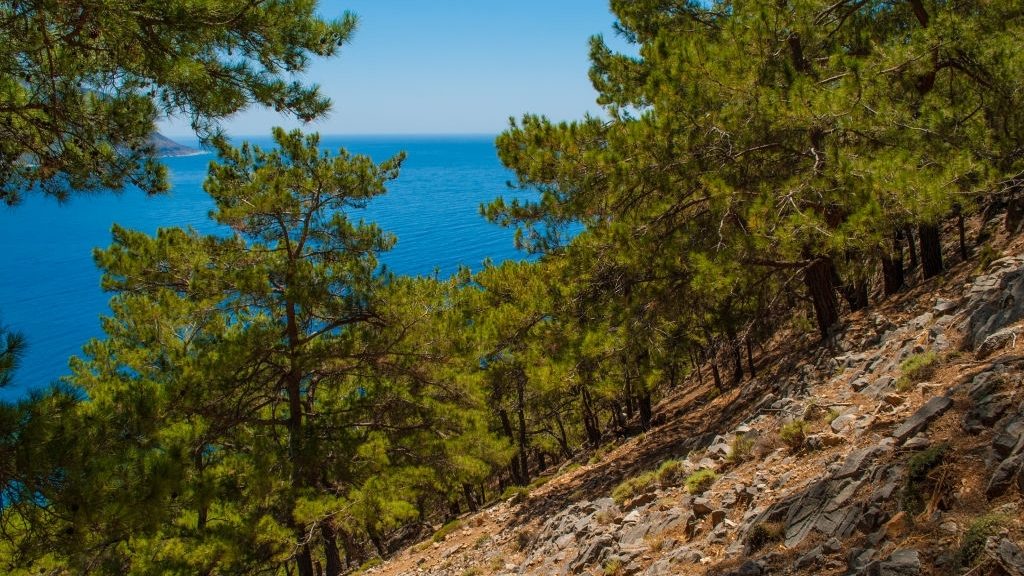 The gorge of Samaria offers one of the most well-known and impressive hiking routes of Crete. The gorge is accessed from its northern entrance at Xyloskalo, the southern edge of the plateau of Omalos. There are daily bus routes to Xyloskalo from Chania.

Crossing the gorge is only allowed during certain hours, from 06:00 to 15:00. That means that for those who have reached Omalos or the Kallergis Mountain Shelter by hiking on the E4 from Sougia, must schedule their hike accordingly. The gorge of Samaria is a Protected Monument of Nature, designated as such by the European Council, and one of the most important National Parks of Greece. This is one of the reasons why regulations are strict and it is essential visitors follow the guidelines.

The area of Xyloskalo (1) at an altitude of 1200 m, gives us the first glimpse of the beautiful route we will follow. The view of the mountain tops marking the limits of the valley of the gorge is spectacular. To the east, we see the peak where the Kallergis Mountain Shelter is located, as well as the peaks of Psari and Melidaou. On the south side, the magnificent peak of Volakias and the “divine” Mount Gigilos, one of the most superb summits of Crete can also be seen. In the very distance, the tallest peak, Pakhnes is faintly outlined. 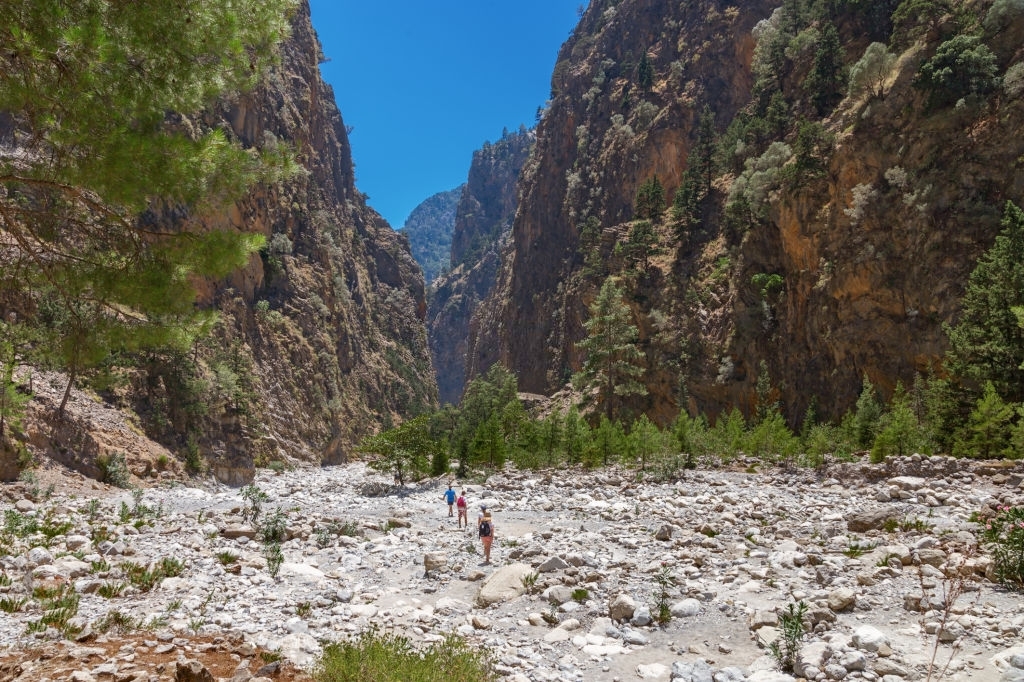 The E4 route from Omalos to Agia Roumeli

We begin our descent towards the steep gorge, following the very well-defined but also very steep path. After approximately 40 minutes, having walked for about 1.900 m, we arrive at Neroutsiko (2). Here we find a designated rest area where we can relax if needed. We continue for about another 1.000 m and then we come to the water spring Riza Sikias (3) to our left.

After Neroutsiko, the path becomes less steep. At first, the stream is on our right-hand side, but after a certain point, we follow its bed. This cross over is repeated many times until Agia Roumeli, which is why going through the gorge is dangerous during periods when sudden rainfalls can create floods. For this reason, crossing the gorge is only allowed between May 1st and October 31st.

About 25 minutes after Rίza Sikias, the first watercourse, we notice the ruins of the base of a structure. This is where a water-powered sawmill for timber once stood. We continue for approximately another 10 minutes.

Soon we reach the centre of a small flat area with huge cypress trees, where we find the chapel of Agios Nikolaos (4), the guardhouse of the Forest Authority and a water spring. This is thought to be a possible location of the ancient town of Keno.

After Agios Nikolaos, the trees thicken and the passage becomes narrower. In about 15 minutes, having walked for approximately 800 m, we arrive at Vrisi (5), where a stone water fountain can be spotted. Having crossed the stream several times, we leave the watercourse to our left and continue to go slightly uphill. By now, on our left-hand side, to the north, the peaks of Melidaou and Psari, as well as the gorge of Kalokampos in between them, can be seen.

Up above Kalokampos, we can distinguish an old tower. As soon as the path begins to descend, it meanders on the slope until the stream at Kolardaktis. On the hill to the south, there is the chapel of Agios Georgios and a huge cypress tree. Having passed a sharp right turn off the path, we see the settlement of Samaria (6). We arrive there after walking for a while in the stream bed and come out onto its right-hand side, below the hill, where the chapel of Agios Georgios is located. An old olive grove can be seen at the foot of the hill, next to the path.

About 3 km after Vrisi, leaving our main route, we cross a small bridge at the square of the abandoned settlement of Samaria. Here you will find another designated rest area, a guardhouse of the Forest Authority and drinking water. Don’t forget to fill up on water, during the hot summer months, it is very much needed!

We leave the settlement of Samaria, cross the bridge and, taking a southerly direction, we immediately come to a narrow passage between a vertical rock and the bank of the stream. The ruins of an old building can be seen here. Immediately after the narrowing, there is a chapel dedicated to Christ (Christos).

A few metres further on, we can see the makeshift helipad which is used in case of an emergency. If we turn left, bypassing the helipad, we will descend to the stream bed. Opposite, on the eastern bank, we can distinguish the ruins of the houses of Kato Chorio of Samaria. From the settlement, we can continue climbing until we encounter the chapel of Osia Maria, to which Samaria owes its name (in Greek: Osίa = minor Saint).

We return to the helipad, leaving it behind on our right-hand side, and follow the path in a southerly direction. A little further on, we meet a small bridge through which we cross to the eastern bank of the stream. Approximately 1 km from the settlement of Samaria, we reach a water spring called Tis Pérdikas to Neró (7) (= water of the partridge). We then pass a narrow section of the gorge, where we see the ruins of a water-powered sawmill, and we continue for a few minutes descending to the stream, to a specific point where the gorge walls rise vertically. The path by now is indistinct, but we stay true to the path of the stream.

When we reach a scree area, the path crosses to the eastern bank, until the area named Kefalovrisia (8). In the stream, you can see huge plane trees, with their sprawling roots. In ancient times, these springs used to supply the shrine of the Oracle of Apollo, which existed in the region.

Continuing from Kefalovrίsia, we follow the path on the eastern side of the gorge. The spring waters from Kefalovrisia run throughout the whole year.

Further on, we pass by an old ruined water mill and after walking past it, we reach the chapel of Christos (9), in a flat, forested area on our left.

By now, we are in the most spectacular section of the gorge, where the narrow passages with the vertical walls succeed one another. We must be extremely careful here, for rockfalls, especially in the late evening and early morning hours, when wild goats roam about, on the sharp gorge walls. This inaccessible, steep area is the kingdom of the Cretan wild goat (kri-kri).

We leave this impressive landscape behind us and notice as the landscape becomes flatter. The stream bed also begins to widen. Still, on the path, we encounter the guardhouse of the Forest Authority and then the old settlement of Agia Roumeli (11). We are not too far from the coast now.

We will first reach a neighbourhood named Spilia, then Mesogitonia and, continuing for a little while on the western bank of the stream, we arrive at Kato Gitonia, which is situated on its eastern bank. Further down, we pass by a small bridge, exactly where the church of Agia Triada is located. We then pass by the courtyard of the church, where the old graveyard of the settlement used to be, and continue towards the outlet of the gorge. Crossing the stream one more time, we reach its western bank and we can now see the coastal settlement of Agia Roumeli (12).

On the top of the hill to our right, a half-ruined fortress can be seen. On the bank of the stream, to our right, there are the relics of an old water mill and in the stream bed, an old stone bridge lies in ruins. We continue on our right-hand side and encounter a church dedicated to the Dormition of the Virgin, built on the site of the ancient temple of Apollo.

After 18 km of walking in one of the most impressive gorges of Europe and surely the most magnificent of Crete, we come to the finish line. Gaze upon the endless blue of the Libyan Sea and relax in one of the tavernas. You have earned a good rest.