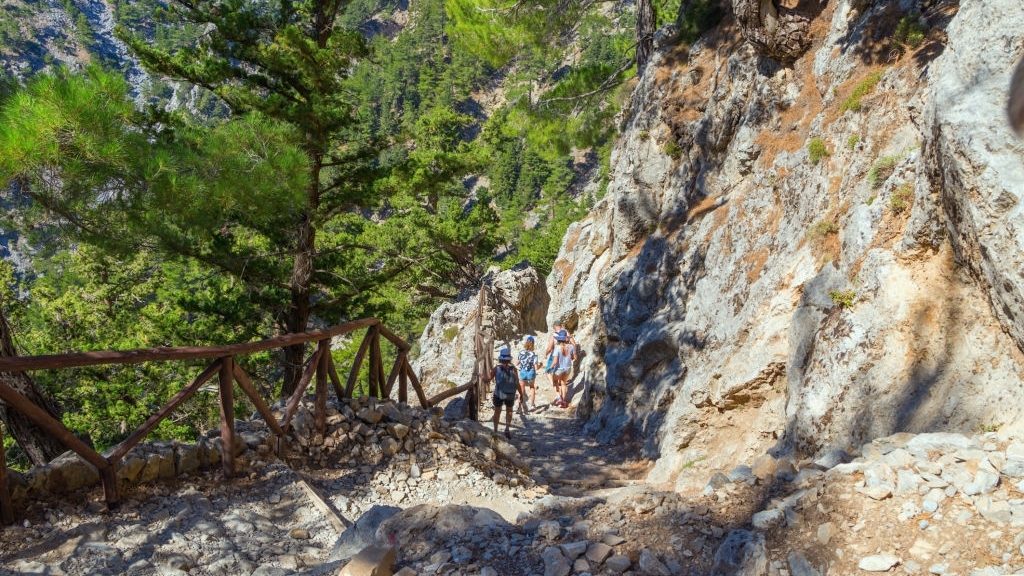 There are a few accommodation options in the village of Omalos and Xyloskalo, however, due to the popularity of the hike, it is best to book ahead if you want to stay here.

The village of Sougia on the southern coast of Crete island is a haven for alternative holidaymakers that want to relax by the beach and hike some of the numerous paths in the region, including the most well known Samaria gorge. The route to Omalos takes you north through the village of Koustogerako, where you can hike towards Xyloskalo and begin the descent through Samaria and down to Agia Roumeli. This is the shortest option; you can also hike through the gorge of Agia Irini, which takes approximately double the time.

With Sougia (1) as a starting point and the plateau of Omalos as a destination, we can choose between two different routes. The first route passes through the village of Koustogerako and the other through the gorge of Agia Irini. Either way, we initially follow the paved road that crosses the gorge of Sougia.

About 2 km from Sougia, we come to a right turn-off (2); this descends for approximately 800 m, to the point where there is a bridge (3), which we cross. We then continue on an uphill paved road which winds on the pine-covered slope and after 4 km we reach the settlement of Livadas (4).

We continue on the paved road until Koustogerako (5), at an altitude of 500 m, on the western side of Lefka Ori. This part of the route is about 10 km long and takes 2 and a half hours.

From the square of Koustogerako (1) an uphill cart track begins, which winds up along an impressive slope. After 2 km of ascent on the cart track, at an altitude of approximately 700 m, we encounter a small plateau (2) and continue north. After 1.400 m and having by now entered a forested area, we meet a right turn-off which we ignore. In the next 100 m, we cross a stream and continue for another 600 m, until the end of the dirt road (3). From this point, a barely discernible path heading north begins. After about 20 minutes of walking, at an altitude of approximately 1.000 m, we meet a stream which we follow up to the point where its bed turns eastwards. This area is called Olysma (4), and you will spot an old shepherd’s stone hut.

From Olysma, we keep walking northwards, following the moderately uphill path along a pine-covered slope. In this section, the path is difficult to discern, so we must keep the bare summit ahead of us in mind, as an orientation point, until we must pass beneath it. A panoramic view of the area of East Selinos stretches out to the west. Down below, at the foot of the slope we cross, the gorge of Agia Irini prevails. About 3,5 km after Olysma, we follow a path (again hard to discern), at an altitude of approximately 1.200 m. Then, we descend to a small flat area, in Panochoriani Sterna (5), where we find a cistern and an old shepherd’s stone hut.

From this point on we follow the cart track, constantly going northwards, and 2 km after passing by a circular stone shepherd’s hut, we encounter the main paved road (6) which connects Omalos and Agia Irini. After 600 m we turn right and come to the church of Agios Theodoros; we continue for another 1,5 km. Then, we arrive at Seliniotikos Giros, at the north-west edge of the plateau of Omalos.