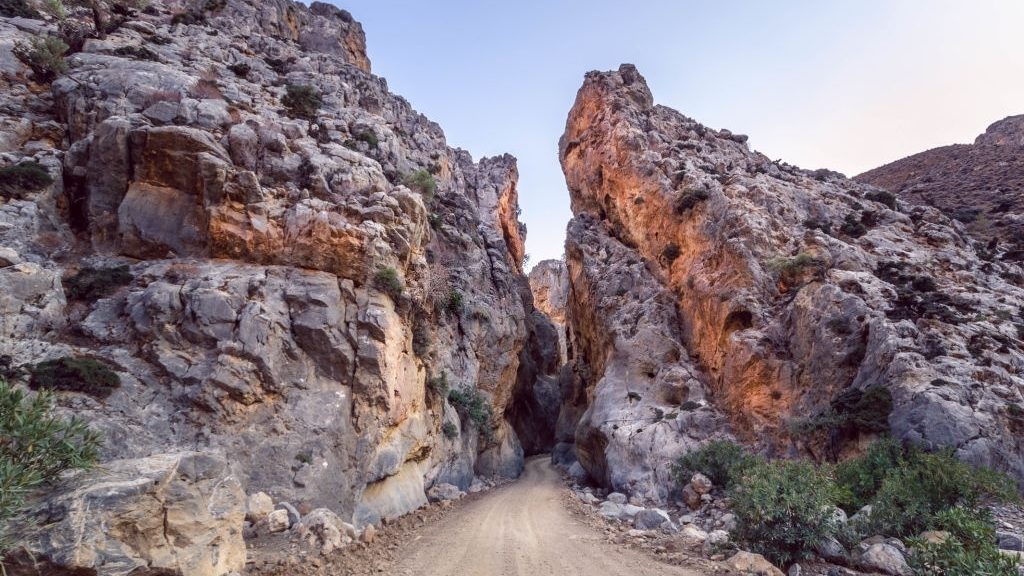 This road trip connects the most important points of interest in the region of Asterousia, such as archaeological sites, settlements, gorges and beaches. You can choose to follow whichever parts of the route you find most interesting. It should be noted, though, that the roads which climb up the slopes of the mountain range usually twist and turn, and in some cases, they are not paved or require a 4×4 vehicle.

All the mountain ranges of Crete are rugged and impressive, but the smallest among them, the low mountain range of Asterousia, which covers the southern part of the Heraklion prefecture, is the barest and most mystifying of them all.

Its southern slopes reach the charming Libyan Sea, creating small yet precipitous gorges which conclude in beautiful secluded beaches. As we start the road trip, we set off from the traditional settlement of Vori, where we find an important folklore museum, the Museum of Cretan Ethnology. There, one has the opportunity to learn about the traditions and customs of Cretan communities, the social organization of the island, and also about architecture, weaving and other folk elements of Crete. We next should make a stop at the famous Minoan Palace of Festos where we can also enjoy a lovely view over the Messara plain. Phaistos, which is built on a low hill, is the second-largest Minoan palace which has been unearthed. Nowadays, one can see the remains of both the old and the new palace. The palace of Phaestos is famous for yet another reason: it is here that the Phaestos Disk, which is dated to the 17th century BC, was found. Its ancient use is one of the greatest mysteries of antiquity. Now it can be seen in the Archaeological Museum of Heraklion. 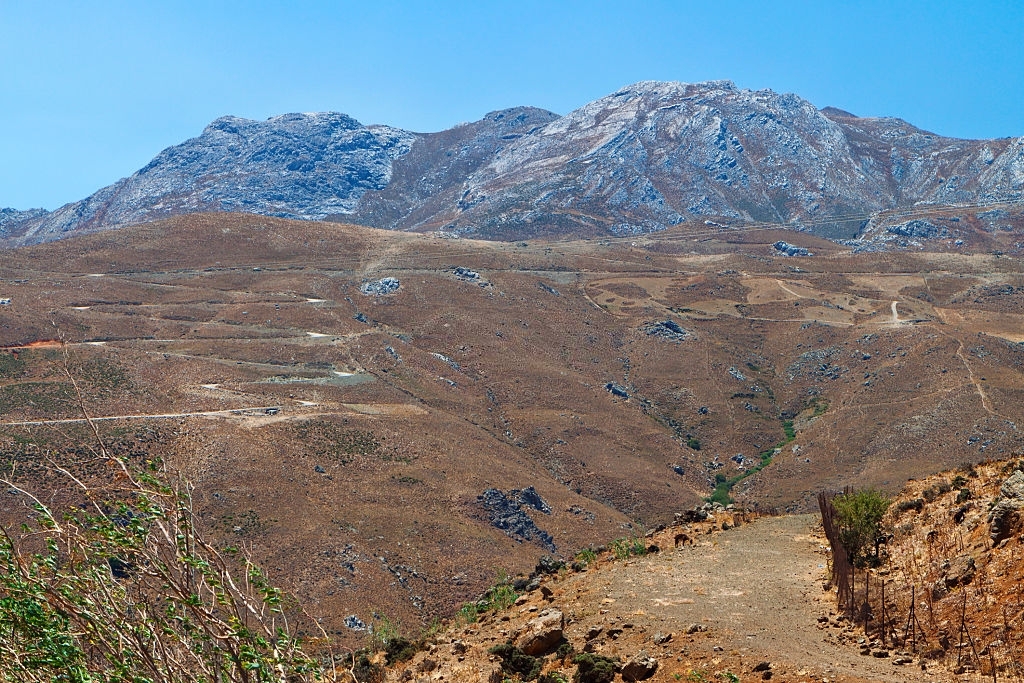 Those interested in archaeology perhaps would also like to visit several other important archaeological sites which are located nearby, such as Matala with the well-known caves, the Minoan villa in Agia Triada, the Minoan coastal town of Komos and the tholos tomb at Kamilari. After Phaestos we pass through the traditional settlement of Ai Yannis, where we can visit the Byzantine church of Ai Yannis, and then continue to the picturesque village of Siva, which has a beautiful square and traditional tavernas. Next, we carry on in a southerly direction and after the village of Listaro, we continue further southwards, until we arrive at the Monastery of Panagia Odigitria. A characteristic tower can be seen, which reportedly was built by Nikephoros Phokas. The monastery became famous thanks to Xopateras, a warrior monk, who is still remembered today for his battle against the Turks and for his tragic demise, which was linked to the history of the monastery.

We then continue southwards until we reach a junction where a dirt road can be seen on the right; this road leads to the entrance of Agiofarango. We can park our car here and walk to this small yet fascinating gorge, which was named like this because it used to be one of the most important centres of asceticism in Crete (Agiofarango = holy gorge). After 25 minutes of walking, we come to the chapel of Agios Antonios, which is built near the outlet of the gorge. A little further onwards we reach a beach, of unparalleled beauty which is enclosed by imposing cliffs. Agiofarango is a favourite spot with rock climbers. You will probably spot climbers going up the steep vertical cliffs, during your walk down the gorge.

Equally beautiful is the nearby gorge of Martsalo. which is approximately 2 km long. After a short and fairly easy hike down the gorge, through a green landscape with age-old olive trees, carob trees and Phoenix theophrastii palms, we end up at the small, beautiful Martsalo beach

To reach the entrance to the gorge, we follow the dirt road that begins opposite the Monastery of Panagia Odegetria and ascends the hill south-west of the monastery. We continue on the main road, travelling in a southerly direction as far as the long, calm beach of Kali Limenes, where the Apostle Paul sought temporary refuge during his voyage to Rome. Kali Limenes is a protected beach, which remains calm even when strong winds rage in the surrounding area.

This part of the route takes you from Kali Limenes beach further down the southern coast towards Tripiti. From Kali Limenes, we continue on the dirt road eastwards, enjoying the view to the Libyan Sea, and trying to ignore the ugly greenhouses. This particular area is exceptionally beautiful. We carry on until we reach the small coastal settlement of Lentas which is built on the site of the ancient town of Levin. Levίn flourished in the Hellenistic and the Roman era as the port of Gortyna and was a sacred town since an Asklepieion (an ancient healing temple) was built here. Even today one can see the ruins of the temple of Asklepios dated to the 3rd century BC. In the area of Lentas, there are beautiful long beaches which attract campers and nudists, such as Diskos, Limanaki, Anatolikos Tsigounas and others. We continue driving in an easterly direction as far as the little harbour of Loutra and then ascend northwards. At the first turn-off, we take the eastern branch of the road until we arrive at Tripiti beach. The road climbs high on the mountainside, avoiding Cape Trafoulas. Approximately halfway to Tripiti beach and as we descend on the eastern side of the cape, we reach a path which leads to the beach, via the small yet impressive Trafoulas gorge. Tripiti beach is long and beautiful; however, it suffers from the makeshift campsite set up on the sand in the shade of the tamarisk trees. In the area, there are tavernas, for a meal or a coffee.

It is time to leave the southern coast of Crete island behind us and travel north. We leave the beach and enter the rocky gorge of Tripiti. We soon pass through the narrowest point of the gorge. The walls are only four metres apart, and it will feel as if there is hardly any space for your car to pass through. After exiting the gorge, we reach a road which meanders up the bare slopes of the Asterousia in an easterly direction. It should be noted that there is another road, a dirt road, which begins after the gorge of Tripiti and snakes up the slopes of the Asterousia in an easterly direction and ends at the village of Kapetaniana. This part is suitable strictly for 4X4 off-road vehicles. The best (and safest) way to reach Kapetaniana is through the northern side of Asterousia and the village of Vagionia, where we turn right and drive southwards so that we ascend again on the Asterousia massif towards Kapetaniana.

The village has less than 100 permanent residents; there is a traditional guesthouse that attracts visitors with impressive views over the Libyan Sea. The bleak and bare landscape and the steep slopes of the peak of Kofinas are breathtaking. Nowadays Kofinas is known for its rock climbing routes. This is also where a Minoan peak sanctuary existed. The mountain retains its religious quality even today with the festival of Timios Stavros (the True Cross) that is celebrated here every year. In addition to that, an ancient custom of tree worship still survives. Kapetaniana village is a great base for exploring this part of Asterousia. In the area, one can visit the Koudouma Monastery which is located at the outlet of a small gorge and is surrounded by a beautiful pine forest. One can even stay overnight in one of the cells available to visitors.

One can also take the road which leads down to the coastal settlement of Ai Giannis, where the secluded beach of Eligia is located. Alternatively, one can descend from Kapetaniana, reaching the villages Loukia and Vagionia and cross the plain of Messara in a northerly direction as far as Agii Deka, where you can also visit Gortyna. The ancient town of Gortyna was the capital of Crete and the Cyrenean peninsula during the Roman period, and for many centuries was the undisputed ruling town of the island. According to Greek mythology, Zeus fled to Gortyna, after he transformed into a bull and abducted Europa. Unfortunately, only a small part of the ancient town has been excavated. In the archaeological site which is open to visitors, one can see the remains of the Byzantine church of Agios Titos (who was the first Bishop of Crete), the Roman Odeon, the Planetree of Zeus and Europa as well as numerous Roman sculptures.