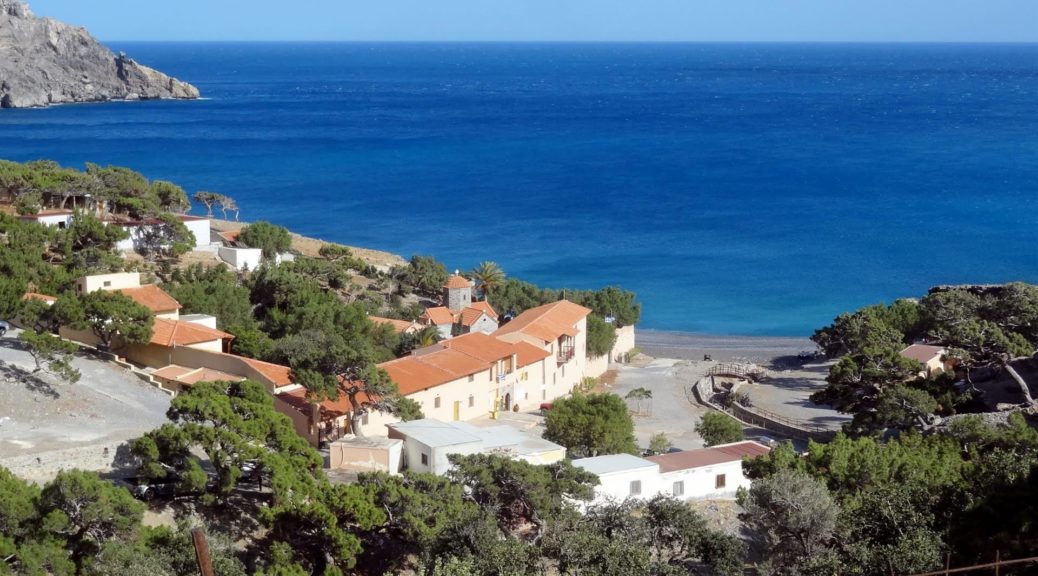 Koudoumas Monastery is dedicated to the Virgin Mary, as are a lot of the monasteries you will find around Crete island. It is located on a beautiful coastal area south of Kofina peak, on the southern coast of the island in the prefecture of Heraklion.

This mountainous region, that belongs to Asterousia Mountains is often referred to as the “Mount Athos” of Crete due to its importance as a centre of hermitage. Asterousia was the cradle of Christianity, especially in the early Christian times, and a rich monastic and ascetic tradition developed within these mountains and particularly around Agiofarago and Martsalo.

The monastery appears to have been founded prior to the 14th century, judging from the mural surviving in the katholikon. It was then deserted and began operating again thanks to the efforts of Ossios Parthenios and Ossios Evmenios, who rebuilt the monastery in the early 20th century. This is the only monastery in Crete located right on the shores of a small sandy bay. On the 15th of August, the feast day of the church, when countless believers arrive to pay their respects, the beach is packed with people and serves as an overnight stay spot. There are two small bays right in front of the monastery that are popular swimming spots with crystal-clear waters but no amenities such as umbrellas or sunbeds. Phone reception can also be tricky around this area due to the mountains, but that is ideal for visitors that want to completely disengage. The monastery is also unusual in that it has guest rooms that are open to everyone that wishes to spend time here but not camp on the beach. For those staying longer, there are various hikes, caves, and little excursions in the area to keep you occupied like St Anthony’s and Avvakospilio Cave.