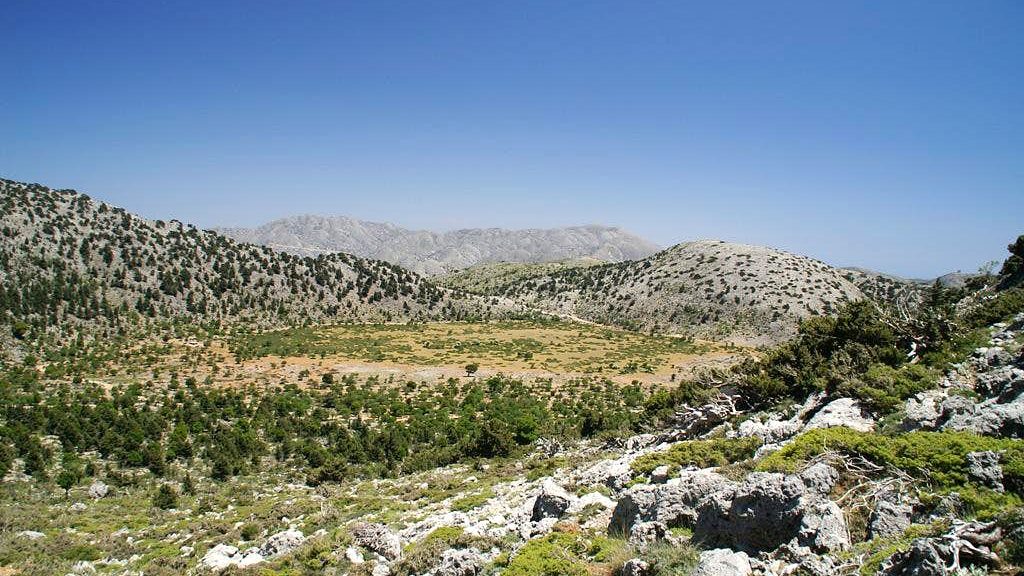 The shelter of Katsiveli, also known as Christos Chouliopoulos, is located deep in the White Mountains of Crete and stands at an altitude of 1980 m. Access is possible only by hiking, either from Niatos Plateau and the E4 trail that ascends from Tavri shelter, or from Kallegris shelter to the west. From here you can also hike to the summit of the White Mountains, Pachnes (2453 m). Apart from water, there are no other facilities in the shelter and it can accommodate up to 22 people. Bookings upon request.

Passing through the valley of Livada, the rocky foot of Svourichti is distinguished high above us to the right. We come across a water spring named Kanavonero at an altitude of 2.200 m. After 45 minutes, a shepherd’s stone hut (“mitàto”) can be seen ahead of us, on a low hill, at the south-eastern corner of Livada. This is a good spot to rest for a while as it is the last point with shade for the next few hours.

We leave Agio Pnevma to our left and climb towards a saddle which is formed on the slope of the peak of Grias Soros, on our left-hand side. Straight ahead of us the peak of Mikros Trocharis appears. Following the marks and the difficult to discern path on the northern side of Grias Soros, we reach a narrow passage through the rock. Once we pass through this narrow passage, which is called Sideroporti (4), we see a characteristic brown-coloured rock, a little higher up ahead of us, at about 100 m. We go towards this rock, bypass it from its right-hand side and begin to descend along the edge of the mountain line. A gorgeous lunar landscape opens up now to our right. Vegetation is almost non-existent here. During the hot summer months, the heat can be quite intense, so make sure you have an adequate water supply.

We continue to descend the mountain line, following the southern side of Mikros Trocharis. Still walking along the slope, without any big ups and downs, we reach the saddle formed by Mikros Trocharis and Askifiotikos Soros (5). From Sideroporti, this part of the route takes about 40 minutes.

After Sideroporti, the route becomes relatively difficult, through shaly slopes and tricky terrain. This is why extra caution should be taken, especially during bad weather and snow, which is common during the winter months.

After the saddle of Askifiotikos Soros, we continue walking on the southern side of Mikros Trocharis. We follow more or less the same contour, turning slightly north-easterly in the hollow (6) which is formed by the slope, and then immediately to the south. After the nameless peak at 2.070 m, which we bypass walking along its foot, we turn to the east on its southern slope and then descend on the south-western slope of Koutalas. After about 1 hour and 20 minutes of challenging hiking from the saddle of Askifiotikos Soros, we arrive at a small plateau (7). Then, we immediately climb to the saddle (8), at an altitude of 1.800 m, on the north side of the peak of Fanari. Here we encounter the ruins of an old, rectangular-shaped, shepherd’s hut (mitato).

We descend to the plateau (altitude: approximately 1.250 m), where an old water tank (11) is to be found beneath a distinctive oak tree. From this point, following a dirt road in a southern direction for 10 minutes, we arrive at the plateau of Niatos (12). On the small plateau, there is a peripheral dirt road which we ignore and cross the plateau, going towards its eastern exit. There, we reach the dirt road again and follow it for about 15 minutes, until the Mountain Shelter of Tavri (13), of the Mountaineering Club of Chania.

The hike from the Christos Chouliopoulos Mountain Shelter until Askifou takes approximately 9 hours, in total, under normal weather conditions. The reverse route, from Askifou to the shelter, is much more challenging due to the continuous climbing. From the 730 m point until 2100 m, the terrain is characterized by rough, bare and slippery slopes.