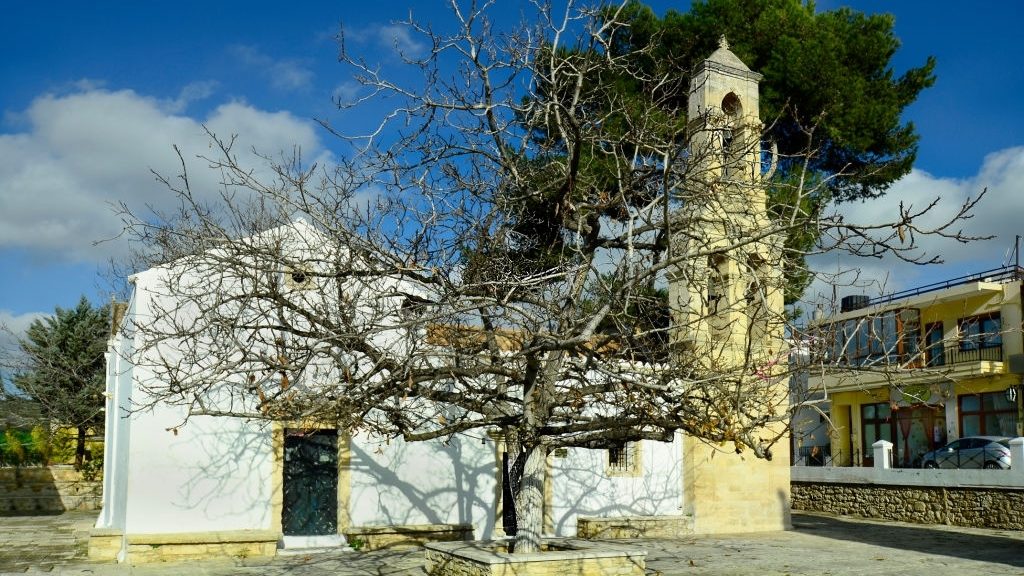 The area of the fertile valley of Archanes and Mount Yuktas is located near the city of Heraklion and the Minoan palace complex of Knossos. As it is believed, it played a very significant role in the Minoan era, as well as later on. Considering the quantity and the quality of the finds unearthed at various locations, it most likely was an important economic, administrative and religious centre.

The place name Archanes is believed to come from antiquity and is probably pre-Hellenic. A remarkable Minoan town with a palace, similar to that of Knossos, flourished on the site of the present-day town of Archanes. North-west of the town, at the location of Fourni, a cemetery was discovered, which yielded finds that are considered indicative of the power and wealth of ancient Archanes. West of the town, at the location of Anemospilia, a large temple with possible traces of a human sacrifice was unearthed. These are the only human sacrifice evidence that have been found on the island from the Minoan years.

Perhaps the most important peak sanctuary of Minoan Crete as well as of the historical years, operated on top of Mount Yuktas, near Archanes. Minoan worshippers from Knossos, Archanes, and the rest of Crete, went there to honour their gods, petition them to grant them their wishes, and to place their votive offerings. According to Greek mythology, Zeus, the father of all gods, was buried on the anthropomorphic summit of Yuktas. When looking at the mountain outline from a distance, the shape resembles that of a human head. Close to the peak, an Orthodox chapel can now be seen. A little to the south, at the location of Livadi, the luxurious Minoan villa of Vathypetro was discovered.

The village of Archanes, so close to the capital Heraklion, is one of the most well-known and picturesque villages for visitors to explore. A part of the E4 long-distance walking path starts at the village and moves east towards the Agarathos monastery. Alternatively, the west part of the trail starts at the village of Profitis Ilias that navigates towards the summit of Youktas and takes you to Ano Archanes. 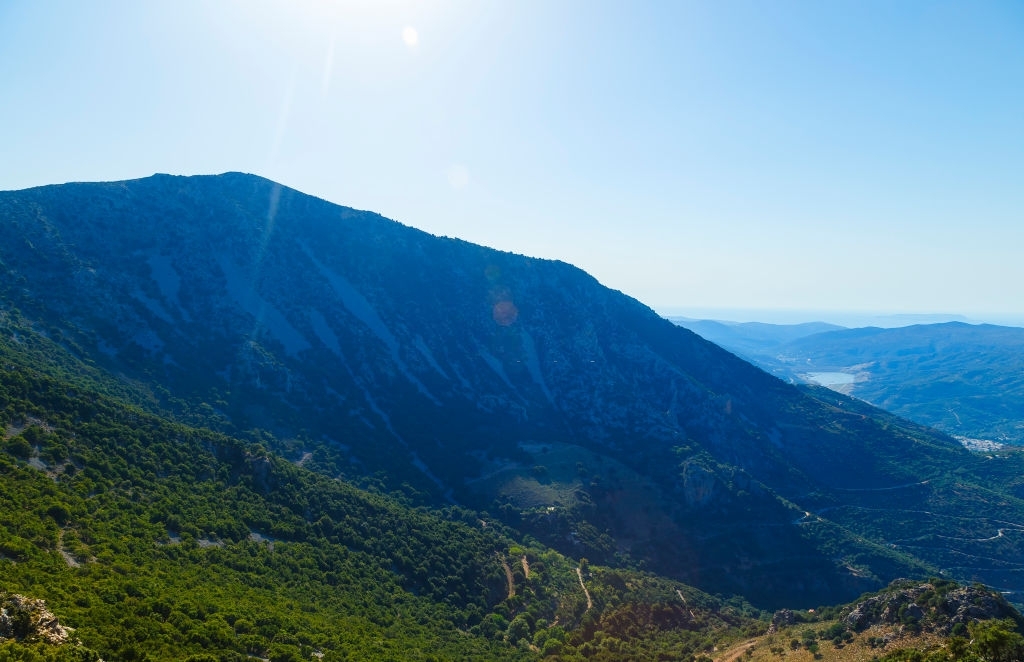 A significant palatial town prospered on the site of modern-day Archanes throughout the Minoan period (2500-1400 BC). The habitation of the area carried on during the historical and subsequent years. Even though the great palace complex of Knossos was in close proximity, it seems that another important palatial centre was needed in the area. The rulers of Archanes not only controlled the fertile inland area but also supervised the religious activity at the neighbouring peak sanctuary of Yuktas. The ruins of the Minoan town lie hidden today underneath the buildings of the current town. 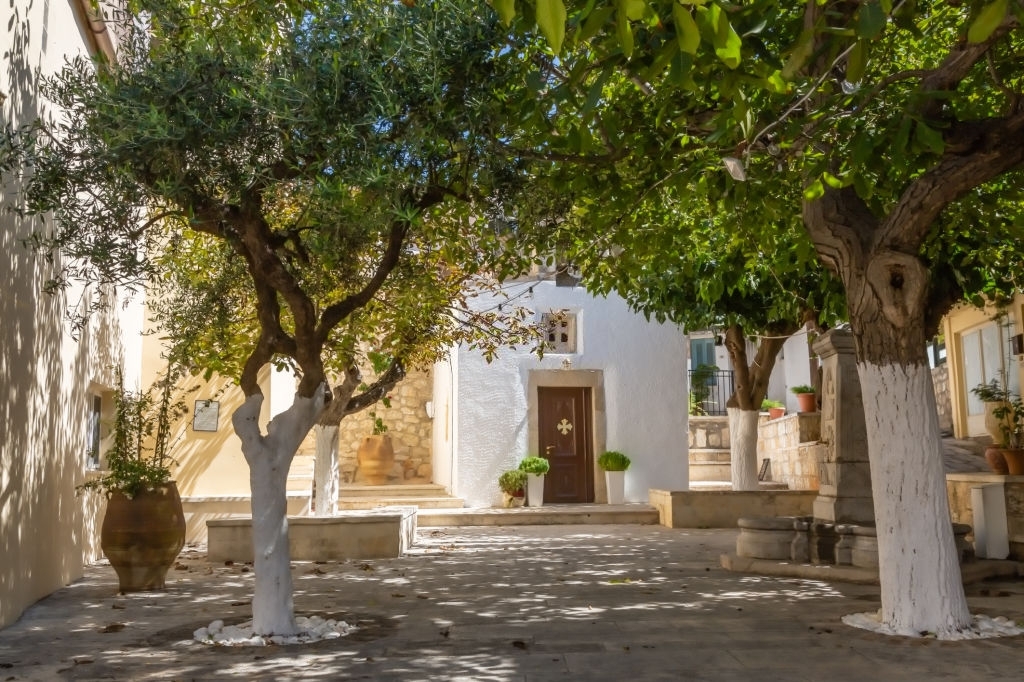 Occupation of Archanes began in the Late Neolithic period, during which several small settlements were scattered in the area. With time, these settlements grew to form a unified urban spread, a change which came along the use of bronze, the development of trade and the gradual rise of the Minoan civilization. Remnants of this unified complex (3300-2000 BC) were found during excavations in several spots inside the town. Its prosperity is suggested by a multitude of finds from this period, uncovered in the cemetery at Fourni. These finds also bear witness to the trade relations that were formed with the other islands in the Cyclades and Egypt.

The first palace of Archanes was probably built at the beginning of the 2nd millennium BC, a time of change in Minoan society when power was concentrated in the palace complexes. Traces of this palace have been unearthed in various places inside the town, underneath buildings of the Neopalatial period. During the Prepalatial period, all individual residential areas were permanently merged together, forming large, unified Minoan towns. In these years, the importance of Archanes grew due to the founding of the peak sanctuary of Yuktas and the temple at Anemospilia.

Circa 1700 BC, Crete was shaken by a massive earthquake, which caused the collapse of the palace and the Minoan town of Archanes. The intensity of the earthquake is evident in the excavated ruins and the finds from the temple at Anemospilia. However, the palace and the town were built immediately after their destruction, and then Archanes enjoyed a period of flourishing, as did the whole of Crete. This was the time of the so-called Minoan Thalassocracy (naval supremacy in the Aegean), and of the trading and cultural exchange with the East and Egypt.

The new palace, the ruins of which can be seen today mainly in the area of Tourkogitonia, was a multi-storied, luxurious building with a central court, a throne room, royal apartments, light wells, workshops, storerooms, a theatre, walls decorated with frescoes, and it was similar in size to the other palace complexes of Crete. The prosperity of the Minoan town and the palace of Archanes was again linked with the neighbouring peak sanctuary of Yuktas, a great attraction of its time, and an important centre of religious authority. Circa 1450 BC, an earthquake destroyed the new palace of Archanes, again. However, life in the town carried on even after the Mycenaeans arrived in Crete a little later. The finds from the neighbouring cemetery indicate a town which continued to prosper even after the arrival of the Mycenaeans.

One of the most remarkable prehistoric cemeteries in the whole of the Aegean and one of the most important archaeological sites of Crete was discovered on the hill of Fourni. The site is located between the current settlements of Epano Archanes and Kato Archanes, below Mount Yuktas, in a landscape thick with vineyards and olive groves. The name meaning “furnace oven” has been given to the hill and the archaeological site of the cemetery that stands there.

The necropolis at Fourni was used from the third millennium BC until circa 1200 BC, and was the burial ground of the Minoans who lived in the town of Archanes. During excavations conducted there, several buildings were unearthed, most of which were funerary, while others probably had an auxiliary or ritual use.  It is believed that most of the tombs were used repeatedly. There were paved roads between the buildings, and a rainwater drainage system. The excavations that started in 1964 were led by Efi and Yannis Sakellarakis and were carried out for almost three decades.

Numerous artefacts that are regarded as unique were found, providing evidence of the power and the wealth of the Minoan town of Archanes. Among others, clay larnakes (= decorated clay coffins), gold jewellery, necklaces, gold signet rings, and ivory objects, were unearthed. Fortunately, whole, undisturbed royal tombs were also found. One of them, Tholos Tomb A, brought to light an intact royal sarcophagus and a wealth of offerings made from gold, bronze and ivory. Close to the side chamber to the tholos tomb, the remains of a dismembered horse and a bull’s skull were found. Based on the animal sacrifice and religious depictions on the offerings, it is possible a priestess was once buried there.

The finds recovered from the cemetery at Fourni are not only indicative of the wealth possessed by the local Minoans and a great source of information about their burial customs, but they also demonstrate the cultural exchange shared with the inhabitants of the Cyclades, of Egypt, and of the Syrian and the Phoenician shores. Finds from the cemetery of Fourni can be seen at the Heraklion Archaeological Museum.

A Minoan construction of remarkable character and architecture was revealed in 1979 at the location of Anemospilia, on the northern side of Mount Yuktas. It is a rectangular building with three rooms and a long corridor running along their northern side, which has little in common with the complex, labyrinthine architecture of other Minoan buildings. According to archaeologists, this was a temple of the Protopalatial Minoan period, in the central room of which a wooden statue of the deity worshipped probably existed. It seems that the temple was destroyed in a violent manner during an earthquake, circa 1700 BC, before it had existed for a century.

The discovery of four human skeletons is considered of the utmost importance; not only does it highlight the site, but also its tragic, violent end. The first skeleton was found inside the temple, very near the exit; it lay on the ground, in a position of flight, crushed by wall masonry and materials fallen from the roof of the building on the moment of its collapse, due to the destructive earthquake. The other three skeletons were found in the room located far west. Two of them, those of a male and a female, were also killed by the collapse of the roof and the fire that followed. The fourth skeleton, however, that of a male individual, was found lying in a peculiar position (with one heel pulled back), maybe partly shackled, on an indoor altar-like construction, with a bronze knife on it. This is evidence of a possible human sacrifice that had never been found in Minoan Crete.

According to the researchers, this may have been a rare and desperate occasion, that took place due to the extreme circumstances at hand. In order to protect their community from utter destruction, the Minoans possibly thought it necessary to sacrifice a human life, offering the gods the ultimate offering conceivable, which would hopefully aid them to appease nature. Unfortunately, this did not stop the earthquake from reducing the temple to ruins.

Access to the cave is often restricted due to ongoing maintenance work. The view from the top of the hill is magnificent and you can drive or take the path from Youktas.

The peak sanctuary at Yuktas was the most significant of the Minoan Era and took its name from the sacred mountain it stood on. It remained an important centre for worship even in subsequent years and was heavily linked to the Olympian god Zeus. The people at the time believed that the father of the gods was buried in the summit. The human-like form of the mountain line when you are looking at it from the west side, probably contributed to this belief. 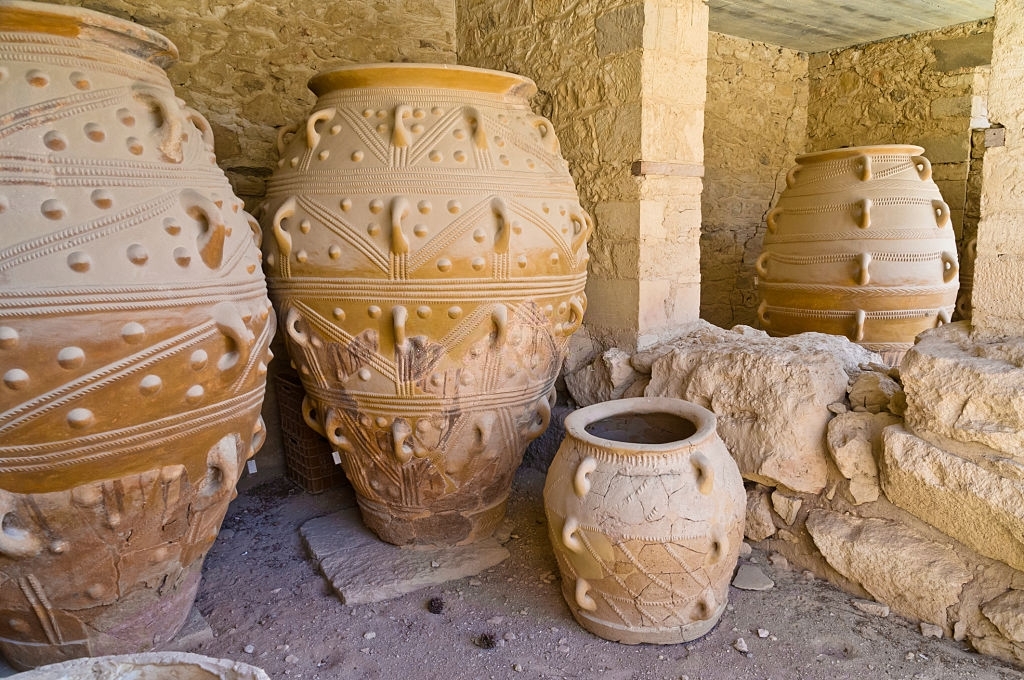 Systematic excavations conducted on the summit have revealed the premises of the peak sanctuary, and numerous finds that indicate its importance. This open-air sanctuary covered three levels. A built, rectangular altar was unearthed, as well as various buildings, which were possibly used as priests’ quarters. Near the sanctuary, there is a cave-like chasm which most likely had a ritual use, since bronze double axes and other ritual objects were found in it. The whole area was surrounded by Cyclopean walls.

During the excavation, a great number of votive offerings, statuettes, animal figurines, sealings, etc, were found near the altar. Among them were several artefacts from the Mycenaean and the Archaic period. Linear A inscriptions on bowls and tables have also been recovered. These finds prove that the peak sanctuary of Yuktas continued to be a place of worship in the years that followed the Minoan era.

The spelling of the name is often changed to Jiouchtas, Giouchtas or Juktas. From this site, you can walk to the Minoan Temple of Anemospilia where four skeletons were found. This was a secondary sanctuary on the mountain and probably less important than the one in Yuktas. The temple was destroyed by an earthquake and there are some evidence of human sacrifice. Parts of the E4 European long distance path run through Mount Yuktas and can be explored on foot. From the west, the trail starts at the village of Profitis Ilias and follows a route towards the sanctuary before descending to the village of Ano Archanes.

A Greek Orthodox chapel is now located close to the location where the sanctuary used to be.