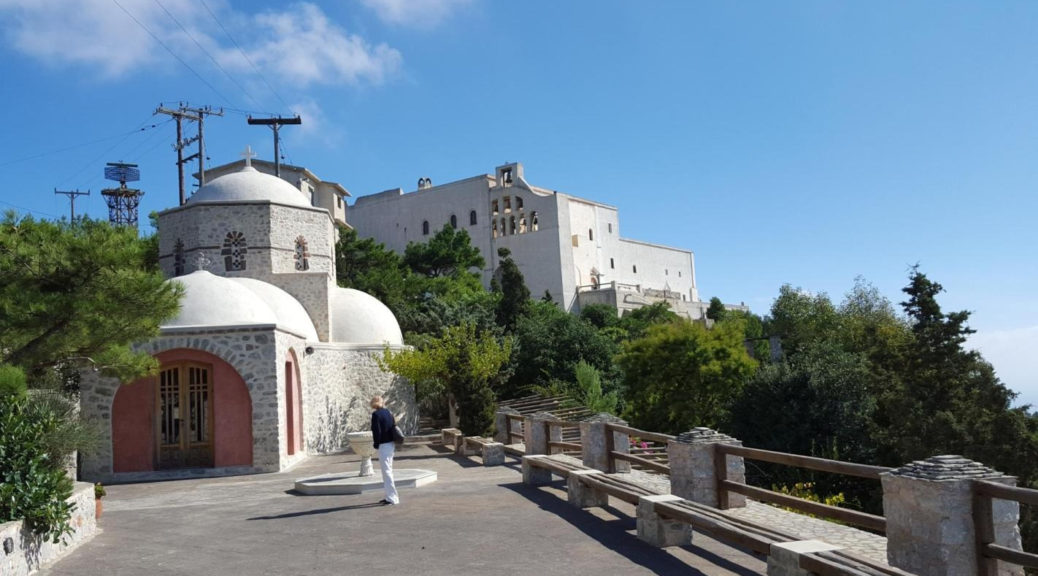 The Monastery of the Prophet Elias is located on a rocky hill near the village of Roustika. It is a small village, not far from the popular springs of Argyroupoli that attracts a great number of tourists during the summertime. To reach the monastery from Rethymno, you will travel south for about 23 km.

The view from the monastery is wonderful. It was built during the years of Venetian rule like many other monasteries in Crete and although there is no exact date for its foundation, it is estimated between the 16th and 17th century. It is of fortress architecture with its katholikon being a three-aisled basilica with a dome, dedicated to the Prophet Elias, the Holy Trinity and the Holy Zone. Inside the katholikon, there is a unique wood-carved iconostasis as well as other remarkable relics.

The bell tower is preserved from the Venetian rule, which is evidenced by an inscription dating to 1637. It is not the only inscription we find in the monastery, but we do not know exactly why they are mentioned. The cells are two-storey, while there is a majestic guest house from 1911 that has remained unfinished. The first years of Ottoman rule were a period of prosperity for the monastery as many devotees dedicated their property to it and in addition, it had secured the privilege of maintaining a bell. In 1713 it became Stavropegian with a sigil of the Ecumenical Patriarch Cyril IV. During the struggles the monastery remained active, offering refuge to the revolutionaries whom it supplied with food and weapons but also helping in the spiritual cultivation of the people of Rethymno. The monastery also maintained an informal school, donated significant sums to schools in the area of ​​Rethymno and contributed a large amount to the construction of a Girl’s School in Rethymnon. The contribution of the monastery during the German occupation was also important since the monks hid the Historical Archive of Crete here. Today the monastery is active with a few male monks.