The Neolithic presence on the island of Crete gives way to the wonders of the Minoan civilization. The name was bestowed upon this era by modern scholars, as a reference to the mythical King Minos, ruler of the kingdom and palace of Knossos.

The Minoan culture developed, flourished and declined between 3500-3000 BC and 1000 BC and lasted close to two millennia.

There are five distinct periods that archaeologists have identified:

In essence, there are three palatial periods sandwiched between periods without any palatial organization. The excavations of the British archaeologist, Sir Arthur Evans and his team, which included members of several nations – alongside the Greeks and Cretans – brought to light a civilization whose existence until then was only known through Homeric epics and Greek myths (specifically the Minotaur). The discovery of Evans, at the start of the 20th century, revealed the ruins of the great Palace of Knossos – the foremost city in Crete from Neolithic times through the Bronze Age. 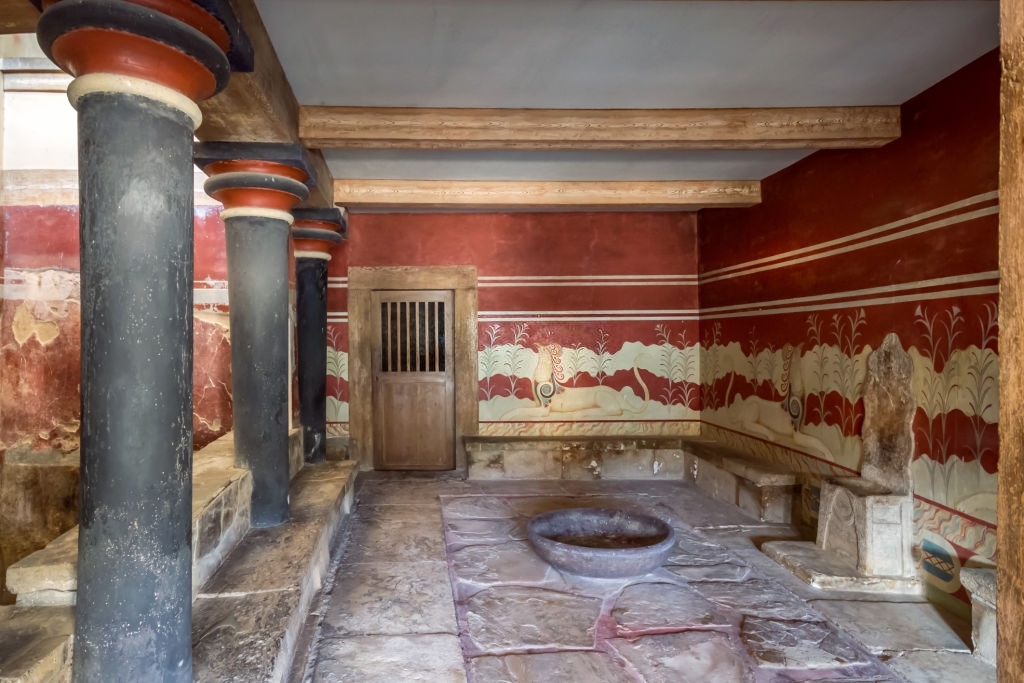 From what we know, the Palace of Knossos, and indeed Minoan towns in general, enjoyed a standard of water management and sanitation which most other cities in Europe during the Hellenistic and Roman times, would surely envy. Their walls were decorated with elaborate and colourful frescoes, where the Minoans come across as people with a passion for life, mainly peaceful and connected to the natural world around them. It is also evident that they were inclined to dancing and sought enjoyment in large public spectacles and athletic contests – when it came to the latter they were, however, often violent! The complex structure of the Palace of Knossos is perhaps responsible for the birth of stories about the infamous Labyrinth. The palace certainly is a maze of corridors, stairs and rooms – at times four or five stories high! When it came to their diet, it was supported and largely dependent on the so-called Mediterranean triad of crops – cereals, vines and olives. Then as today, oil and vine products were the main agricultural products grown in and exported from Crete.

The Minoans understood perfectly the importance of the sea to their life and trade relationships. During the rise of the Minoan civilization, they never resulted in building walls around their cities (Malia is an exception). Instead, they utilized other defences and warning systems based on beacons, as well as efficient roadways and manned fortlets that served in their place. The sea was also an avenue of communication with other cultures. Gradually the Minoans became skilled shipwrights and they were the first culture in the Mediterranean to base their expansion on a trading fleet. Soon after that, they established colonies on the nearby islands of the Aegean, like the Cyclades, and entered into trade-exchanges with Egypt and Syria (the Levant). It is believed that eventually, they reached Sicily and perhaps Sardinia. The wealth experiences gained overseas while conducting their trade relationships enabled them to create large harbours, organize an efficient water-management system and of course build impressive Palaces.

Even the self-orientated Egyptians admired Minoan sea-faring activity. On several Egyptian tombs, we find scenes of Aegeans (the Keftiu are likely to be Cretans) bearing ‘gifts’ to the Pharaoh. For the most part, the Minoans are portrayed as ‘good’ foreigners from the “Great Green”, whereas many others from beyond Egyptian shores are collectively termed “Haunebu“, or barbarians.

The Minoans developed an effective, centralised bureaucracy to monitor and manage their trade-exchanges and daily life. Their daily records were on clay tablets. The first scripts are hieroglyphic and certainly owe much to Egypt. Later a syllabic script emerges under the stimulus of the Palatial lifestyle; first Linear A (Minoan, and undeciphered still) and then Linear B (an old form of Greek, readable and introduced from the mainland). The Minoans did not decorate their walls with scenes of battle and warlike achievements, nor have any written evidence been discovered that describe military events and feats.

The two favourite themes for the frescoes are scenes of Minoans in everyday life, albeit with a ritual dimension which also includes athletic events and scenes of the natural world. The latter is characterized by flowers, fish, dolphins, birds and various animals set in mythical landscapes. The human figures on the frescoes are above all glamorous, with long black hair and lissome silhouettes, clad in beautifully patterned and multi-coloured costumes. The women, in particular, are drawn wearing eye-catching dresses and bodices that often leave the bosom bare – perhaps to denote beauty, health and fertility. If one can place any credence in the scenes portrayed by the Minoans, the display of female breasts was not considered provocative and would have been standard practice during certain rituals or even in everyday life when women nursed their babies.

Women in Crete enjoyed higher social freedom than those in any other contemporary culture, even more so than in Egypt. The frescoes in the Palaces and houses portray women as independent personalities, dressed elegantly and wearing make-up. They also participated in public ceremonies alongside the men, even during sporting events. Indeed in many of these rituals, it is the Court ladies who had the central role, while men were often excluded.

The highest members of Minoan society were the aristocracy and noble-born, including the clergy. Below them were the craftsmen, traders and administrators – the most important of whom survived on rations issued by the palace. Further down the scale were the working folk of the day – farmers, shepherds, fisherman and unskilled labourers. It is unclear whether those less-privileged were better off than their equivalents in other cultures of the time. A thousand years later, Aristotle commented that labourers in the times of the Minoans enjoyed all the privileges their society had to offer – except for two: they could not carry weapons, nor could they participate in sports and gymnastic activities.

During this period, the political, secular and religious aspects of society were fully integrated. The Throne Room of Knossos, made from alabaster and not particularly luxurious, was an important area, where in addition to administrative and political issues, the priests would often carry out important ceremonies. Sporting events were also probably in part connected with the worship of the natural world.

The sacred animal of Minoan Crete was the Bull and works of art depicting the beast are found on every side in the Palace of Knossos. The most popular and important ‘sport’ at the time, was bull-leaping where athletes took the bull by the horns and performed complex somersaults over his back. It is believed that the purpose was connected to the worship of the bull and part of a specific ritual, and the male and female athletes that performed the jump were not in serious danger.

Overall, little is known of the religion of the Minoans and there have been no finds of elaborate, separate temples, without including the main Palace that was surely considered a sacred structure. There is also very little information regarding the powerful priesthoods or large cult statues of the Gods, though these may have not survived if they were made of wood. The main deity was some sort of Great Mother, which may perhaps explain the central role of women in Minoan society. Many small figurines depict the goddess with an elaborate dress, bare breasts and intricate and impressive hairstyles. Some are shown handling snakes. The ceremonies, sporting events and the sacrifice of bulls were carried out to ensure that the Mother Goddess would protect them from disasters – such as shipwrecks, sicknesses, failure of crops and of course, earthquakes.

The End of The Minoan civilization

Despite their frequent sacrifices to Mother Goddess, the Minoans were quite frequently and severely plagued by earthquakes. The shocks and aftershocks would have put immense pressure on their society, and certainly been detrimental financially, even at the height of their power. One of the most destructive occurrences was the major volcanic eruption of Thera (modern-day Santorini) in the 2nd millennium BC. The explosion devastated the heart of the Cycladic island, led to the collapse of its central part, and covered a vast area in meters of pumice and ash.

The cloud of ash that drifted south also caused problems on the island of Crete, and blanketed fields and houses before a series of powerful tsunamis battered the north coast, spreading death and destruction to the whole area. The Minoan fleet was utterly destroyed by the tsunamis.

However, the Minoan civilization did not perish straight away. In the following years, the island was ravaged by natural disasters and civil unrest, making it vulnerable to conquerors. Ultimately, they were invaded and defeated by the warlike Mycenaeans, who established strong political control and adopted a lot of the practices of the Minoans. The last Palaces, Knossos, Kydonia (Chania) and Agia Triada by Festos, flourished for a century or so, before succumbing to natural disasters and extensive fires. Even so, Crete – now more regionalized – was able to maintain a strong presence within the Mycenaean world until 1200-1100 BC.