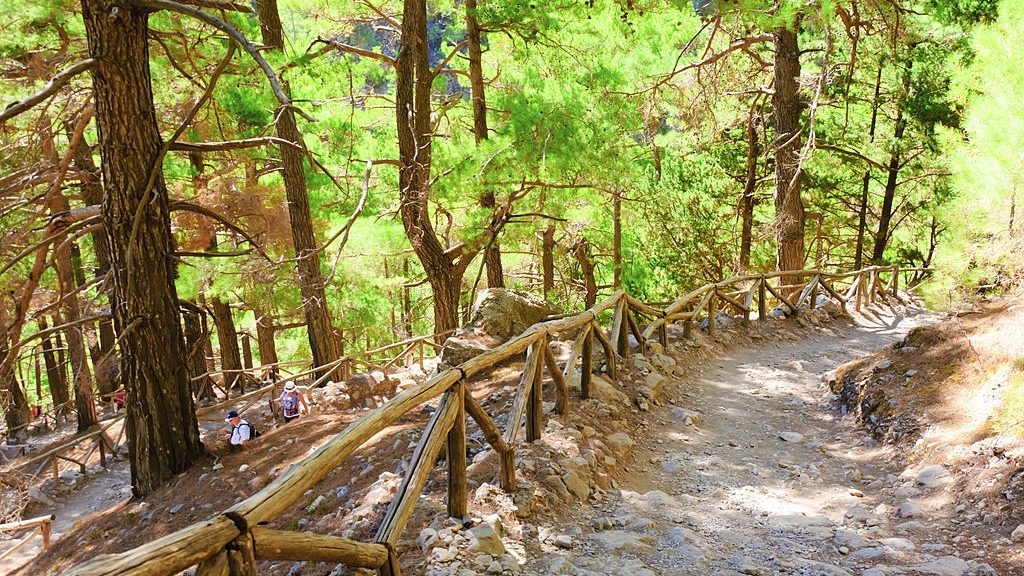 The gorge of Samaria is the longest and one of the most imposing gorges in Europe. The trekking path that runs along its course is perhaps the most popular in the country and visited by thousands of people each year between May and October. It has been designated as a Protected Monument of Nature, by the European Council, and is one of the most important National Parks in Greece. The gorge is 18 kilometres long and its width varies between 150 m and 3-4 metres at its narrowest point, which is known as Sideroportes. In the past, the gorge often served as a refuge for local people, who would run to it to escape the killings, during periods of foreign occupation. In 1770, thousands of Sfakian women and children fled there after the Daskalogiannis Revolt.

The hike down the gorge begins at Xyloskalo, in Omalos (at an altitude of 1.200 metres). Most choose to start their hike quite early in the morning, since it requires between 4-8 hours, depending on fitness level, walking pace and how many photographs you stop to take. On average, six hours are enough for those who wish to enjoy the route without being in too much of a hurry.

Walking down the Samaria gorge, one discovers a varied landscape, with water springs, pools and massive rocks lying in the watercourse, as well as numerous trees, such as plane trees, pines and cypresses. In antiquity, cypress timber cut in the gorge was exported to Egypt. Indeed, a whole “industry” is believed to have operated here, to provide the necessary material for building the Minoan palaces. Trees and deciduous oaks rooted on the highest cliffs, ineffable scents of herbs and the occasional Cretan wild goat (kri-kri) climbing on a steep slope (for those who are lucky enough to see it) make the trek through this gorge unforgettable. Hundreds of species of flora and fauna (some of which are endemic) are to be found in the National Park of Samaria. The last section of the walk proves to be the most challenging. Even though you have left the gorge behind, the heat is becoming hard to bear, and fatigue takes over. Fortunately, the Libyan Sea is close-by and the boat towards Paleochora is waiting for you.

Organized tours to Samaria gorge take place during the summer and early autumn months between May and October.