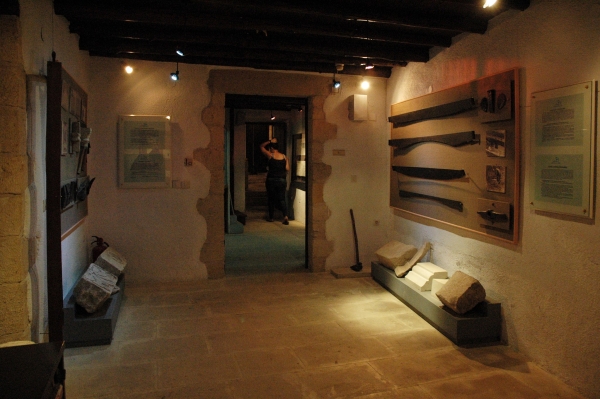 Il Museo Storico e del Folclore di Gavalochori was founded in 1967 but was inaugurated in September 1993. It is housed in a building typical of the local traditional house architecture and occupies two levels. It has a modern design, which helps to exhibit and highlight the existing displays and items in a way that guides the visitor through the rooms. There are seven main exhibit rooms in the museum. Each one is focused in a different area of life, starting with the Arched House, Silk, Pottery, Lace-making, Masonry, Stone Carving and finishing with Church and Woodcarving.

The first room represents a typical traditional house in Crete, known as the kamarospito. This type of rural house was initially single-spaced and had an arched opening which more or less divided it into two distinct areas. A lot of storage space was needed, and the main activity centered around the kitchen and wine press, which also turned into a bed. In the second hall one can see exhibits made of silk, such as women?s clothing and weavings for household use. The pottery section (jugs, oil lamps, etc) and the historical collection of arms, paintings etc, are in the third hall. Passing on to the fourth room one can see bobbin lace and parts of a wood carved ecclesiastical iconostasis or shrine. In the last room there are elaborate stone artefacts. We also find guns, swords and other weapons used during the struggles of the Cretans for their freedom in the last centuries fighting against occupying forces. Among the exhibits, there are Cretan costumes made from local silk and a traditional wedding dress also made from “kopaneli” (Bobbin lace).