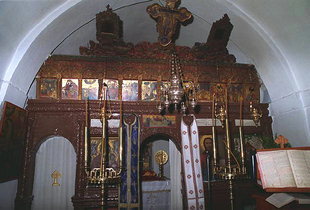 Monastero di Diskouriou is located near the traditional settlement of Axos and was the glebe of Monastero di Halepa. It must have been in operation during the late years of Venetian Rule, as it is listed in 1630 in the list of Mylopotamos villages. The fact that an important religious centre was located here is also proven by the fact that a very old Byzantine Chapel dedicated to Saint John is situated next to the monastery.

Moni Diskouriou has a citadel-style architecture, with the catholicon dedicated to San Giorgio situated at the middle of the structure. Although the monastery was established in the era of Venetian rule, it suffered continuous damages and underwent extensive alterations during the 20th century. As a result, only a few elements that highlight its original form have been preserved. During the revolution of 1821, the monastery was set on fire and destroyed, while the earthquake of 1856 caused extensive damage. It also played a significant role during the revolutions of 1866-1869 as did most of the monasteries in the region and, as a result, was set on fire by the Ottomans.

The monastery is open to visitors that can sit and enjoy the stunning vistas and mountainous views. From Rethymno, the distance is about 46 km, and takes under an hour. The same is true if you are travelling from the west side close to Heraklion. The west route will take you through the archaeological site of Tylissos that is worth stopping in and exploring. Near the monastery, we also find the charming villages of Anogia e Zoniana. They are located on the northern edge of monte Psiloritis, at a height of 750 m and numerous hiking paths and trails are on offer in the area. Anogia is famous as the village and birthplace of legendary Il cantante greco Nikos Xylouris. Here we also find an ancient settlement and archaeological excavations in the area are still ongoing.