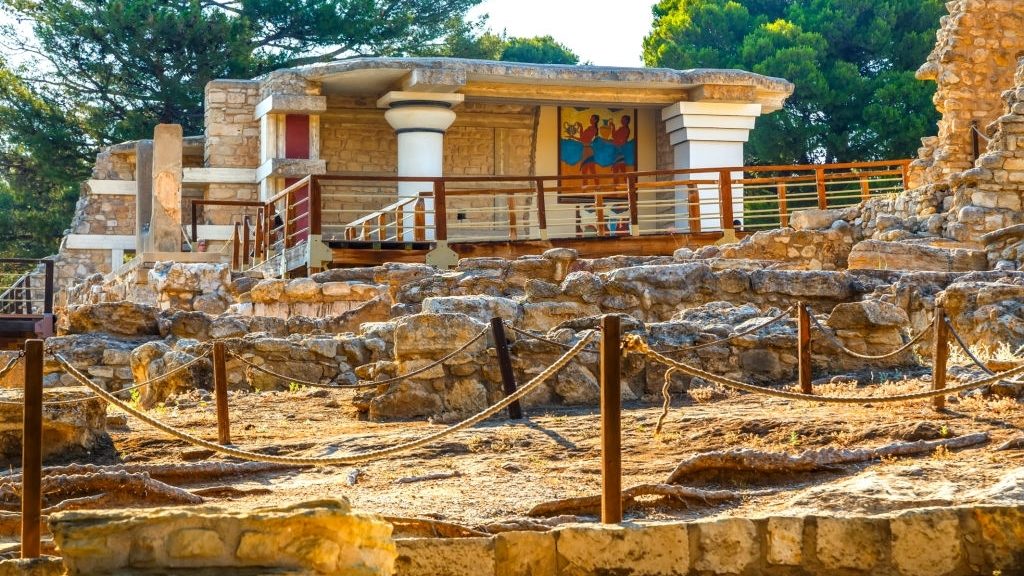 About 15 kilometres east of Heraklion, after Amnissos and Kako Oros, in the area of the current settlement of Kokkini Hani, we find an important archaeological site, where a large, luxurious Minoan villa has been unearthed. It is also known as Nirou villa, named after an older settlement which existed there (Nίrou Hani).

It was a two-storey building with a lovely sea view, dated to the Neopalatial period. Considering the ashlar blocks on the façade, the frescoes, the colourful decorations, the wooden beams in the walls, and the general architectural layout, the villa must have had a palatial character. It covered about 1.000 square metres and had about 40 ground-level rooms and two paved courts, one in the south and one in the east. A platform or an altar with three steps and a pair of horns of consecration, which most likely had ritual use, were found in one of the courts; this court resembles the theatres of Knossos and Phaistos, on a smaller scale.

The entrance to the villa was collonaded and it led to the main hall which had pier-and-door partitions (polyhyra). From there, corridors led to the other parts of the villa. In the sanctuary, at the south-east corner of the complex, there was a hearth (hestia) where sacrifices probably took place. During the excavation, four colossal bronze double axes were found in the sanctuary, which can be seen today in the Archaeological Museum of Heraklion. There are a few other significant rooms in the villa, such as the altar storerooms, where 40-50 clay altars (terra cotta tripod tables) were found in storage, and the lamp room, the floor of which was decorated with multi-coloured stones that must have given the impression of a mosaic. It was thus named because four oil lamps were discovered in it, two of which were pedestalled, with a high cylindrical stand.

Taking into account these finds, archaeologists came to the conclusion that the particular villa had been more than mere headquarters of a local ruler. It most likely had been the seat of a palace official from Knossos, and perhaps of some high priest, who used these hieratic liturgical vessels and articles for rituals of the Minoan religion. Nirou villa was probably the centre of a local Minoan settlement. A little to the west, at the location of Agii Theodori, where the Knossos Hotel is to be found today, a Minoan port, as well as various buildings and installations have been excavated. Nirou villa was destroyed in 1490 BC by an extensive fire, which left distinctive marks on the place.