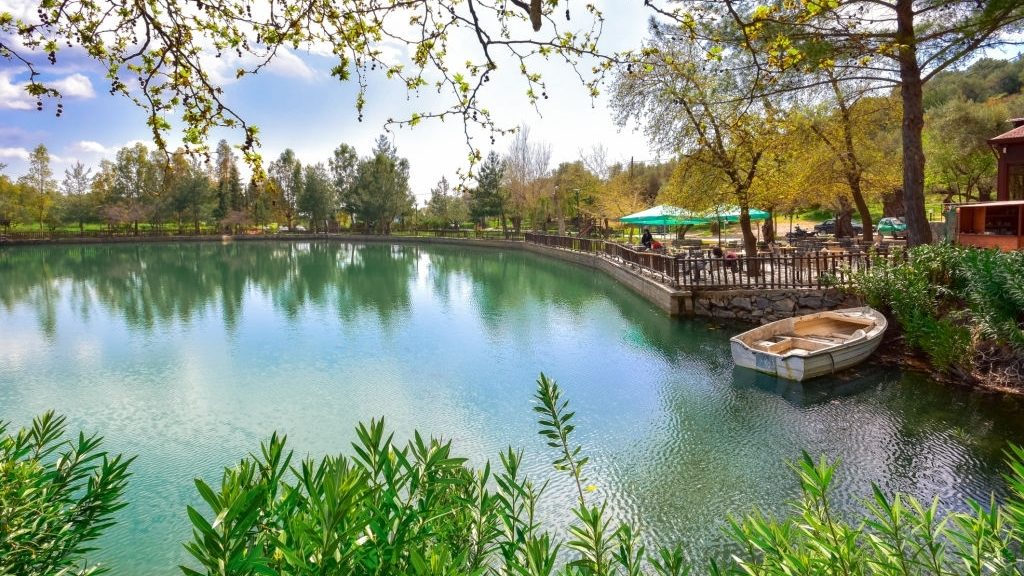 The route develops along the eastern and southern fringes of Psiloritis and passes through picturesque villages, archaeological sites, Byzantine churches and places of special natural beauty. At the same time, it offers the possibility of many detours and hiking routes and therefore can be used as a guide for exploring the surrounding area. For those who want to see everything suggested in this guide, it is best to dedicate at least a few days.

Starting from Heraklion we follow the national road west to the Gazi junction from where we exit to the rural road in the direction of Tylissos. This is where we can visit the three Minoan Villas of the Neo-Palace Period. Following the picturesque road that twists and turns in the hilly landscape where the ancient olive groves and the famous vineyards of Malevizi dominate, we cross the villages of Moni, Keramoutsi and Korfes and reach Krousonas. The village is built amphitheatrically at the eastern foot of Mount Psiloritis at an altitude of 460 m.

From Krousonas we can visit the coenobitic Monastery of the nuns of Agia Irini and continue in the mountainous area of ​​Livadi with the thousands of apple and pear trees and then Vromonero with the forest of Prinos. In the area, there are agritourism infrastructures and traditional taverns with very good food. Returning to Krousonas we can stop by the exhibition of local products of the Women’s Cooperative of the village, “Krousaniotissa”.

The rusks, the raised kalitsouni, the plumouli buns and the noodles made by the women of the cooperative are all very popular and incredibly tasty.

Then after visiting the village Sarhos where the famous homonymous cave and the Byzantine church of Eleousa in the village of Kitharida are located, we leave the small valley behind us and ascend to Pentamodi and Petrokefalo to reach Agios Myronas. In the beautiful village with the traditional houses, we can visit the church and the cave hermitage of Agios Myronas from where it got its name. The church dates back to the Second Byzantine period, although a pre-Christian basilica was probably located here previously. We continue south, crossing Kato Asites to the village of Pano Asites. From here we can set out on a little hike that will take us to the mountaineering shelter of the Mountaineering Association of Heraklion at Prinos. The path along the hike is rough but the view from the location of the shelter is exceptionally rewarding. It takes approximately an hour and a half to reach the shelter.

South of Asites we will find the imposing rocky hill of Patela tou Prinias where the ruins of ancient Rizinia are located. It is worth a stop as the view is magnificent and if the horizon is clear, we can see the sea and the island of Dia in the bay of Heraklion. We continue further south, crossing Prinia and from Agia Varvara, we can visit the picturesque traditional village of Agios Thomas with its many Byzantine churches and carved presses. There is also an agritourism unit here, one of the oldest in Crete.

We return to Agia Varvara and continue west in the direction of Gergeri which we reach after descending the road that meanders on the slope above the village of Panasos. In Gergeri we can visit the exhibits of the small Museum of Natural History, the watermills and the picturesque alleys of the village or follow the mountain road that after about fifteen kilometres will lead us to the famous Rouvas Forest. After a while, you will need to drive on a dirt road with many turns, that ultimately leads to a green valley with a river and tree-lined valleys. The Rouvas Forest is one of the most important ecosystems of Crete that covers about 30,000 acres and has been included in the Natura 2000 network. In addition to prinos, the forest is rich in cypresses, pines, plane trees, and aspen trees.

If you want, you can have a picnic in the landscaped recreation areas or follow the path for the descent of the gorge of Agios Nikolaos which ends near the artificial lake of Zaros. It has a total length of only 5 km but crossing it takes almost 4 hours. From Gergeri we continue west and after the village of Nivritos at the bottom of the green valley, we arrive at the picturesque village of Zaros. Zaros, known since antiquity for its spring waters, has developed an important agritourism infrastructure and is an ideal starting point for the exploration of the wider area.

South of Zaros is a large number of small abandoned settlements as well as the artificial lake of the Faneromeni Dam which has been transformed into an important habitat for the birds of the area. North of Zaros is the smaller but beautiful lake Votomou and at the entrance of the gorge of Agios Nikolaos is the homonymous monastery with the small church. West of Lake Votomos we can visit the ruins of the Roman Aqueduct. As you follow the road to the historic village of Vorizia, west of Zaros, you can visit two of the most important Byzantine churches of Crete. First, the frescoes of Agios Fanourios, on the site of the now ruined Monastery of Varsamoneros, are considered some of the most important examples of the Cretan School of Hagiography. Then, returning from Vorizia to Zaros, we bypass the north to visit the equally important monastery of Vrontisi, where, according to tradition, El Greco studied at the famous school of hagiography.

From Vrontisi if we follow the forest road that winds on the pine-covered slopes of Psiloritis we can visit the western area of ​​the forest of Rouvas or admire the view from the top of Samari where the Mountain Shelter of the Municipality of Zaros is located.