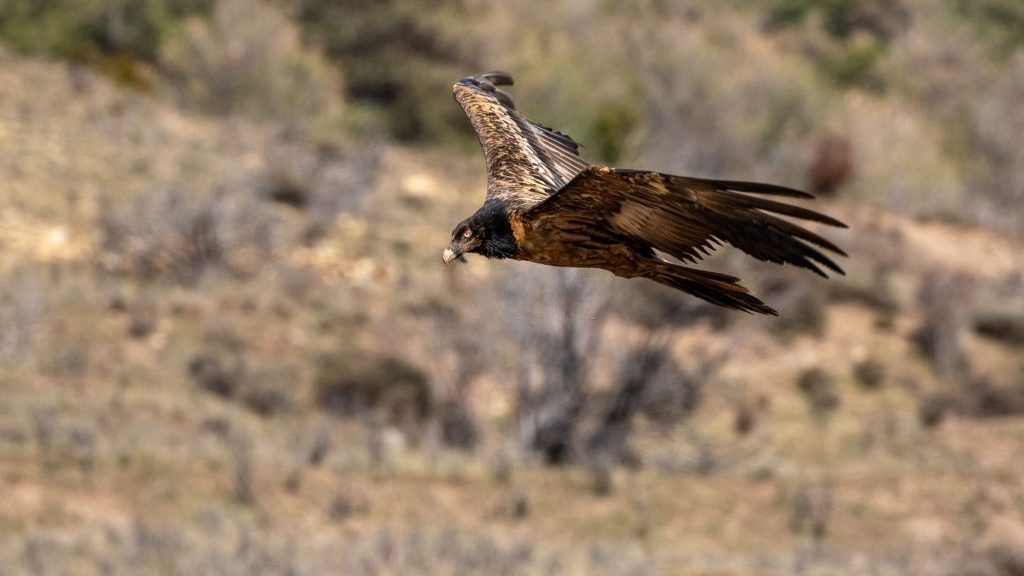 Crete island is a habitat of a range of rare species and other large birds of prey. The mountain ranges, gorges and overall morphology of the terrain provide ample space and safe nesting spots for these birds. In general, Crete is an excellent bird-watching destination, as it welcomes both large birds of prey as well as migratory birds that arrive to breed or rest.

Let’s take a look at some of the large birds of prey you are likely to spot in Crete. 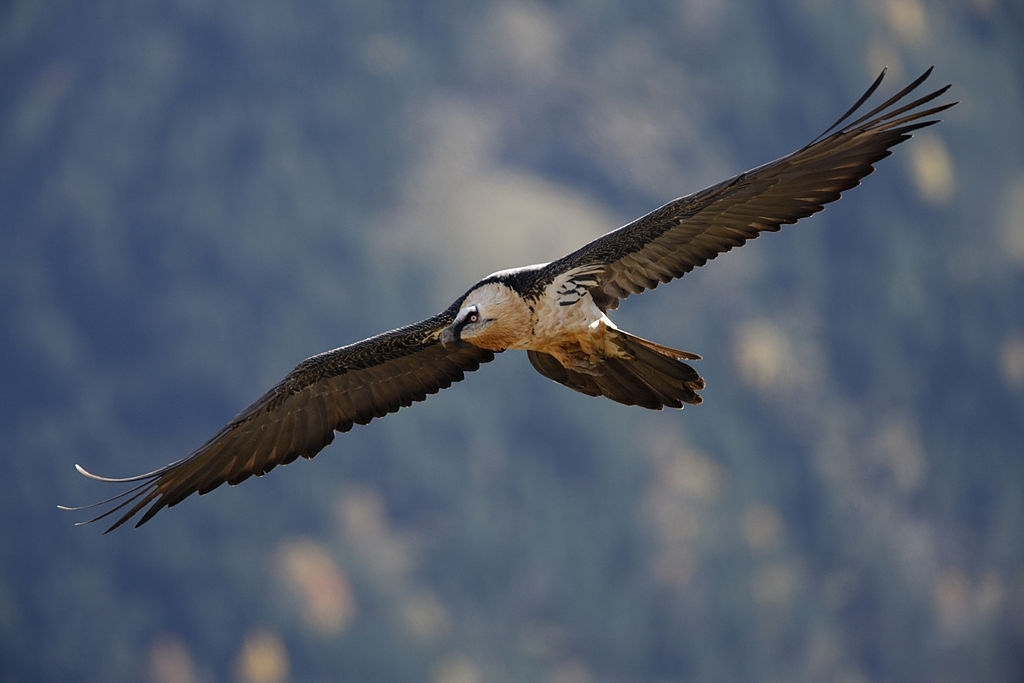 The bearded vulture, also known as the Lammergeier is the rarest vulture found in Europe and the wider Mediterranean habitat. Largest of all the local raptors it can measure from beak to tail tip more than 1.10 m, with a wingspan of over 2.50 m; its weight though is relatively light at only 5-8 kg, depending on whether it is male or female. Its welfare is a matter of concern in the EU and the animal is protected by EU Directive 79/409/EOK (app. 1). It is also listed as a species at risk of extinction in the European and Greek Red Data Books of Threatened Vertebrates.

Crete hosts – at the present – the only viable population in Greece – with only 4 breeding pairs, and a population of no more than 25. The decline of the species has been dramatic over the last two decades, and especially since the late 1990s. The bird population is spread throughout the Cretan mountain ranges (13 known domains), but excluding the 4 breeding pairs, all are unattached and solitary. Kokalas (meaning “bones”) is the name given to the species locally; a fitting name as it primarily consumes only bones. The average territory size is some 350 sq. km, within which each bird seeks its daily rations. The nests are located high, between 350-1500 m in elevation, always in small caves in vertical cliff-faces. 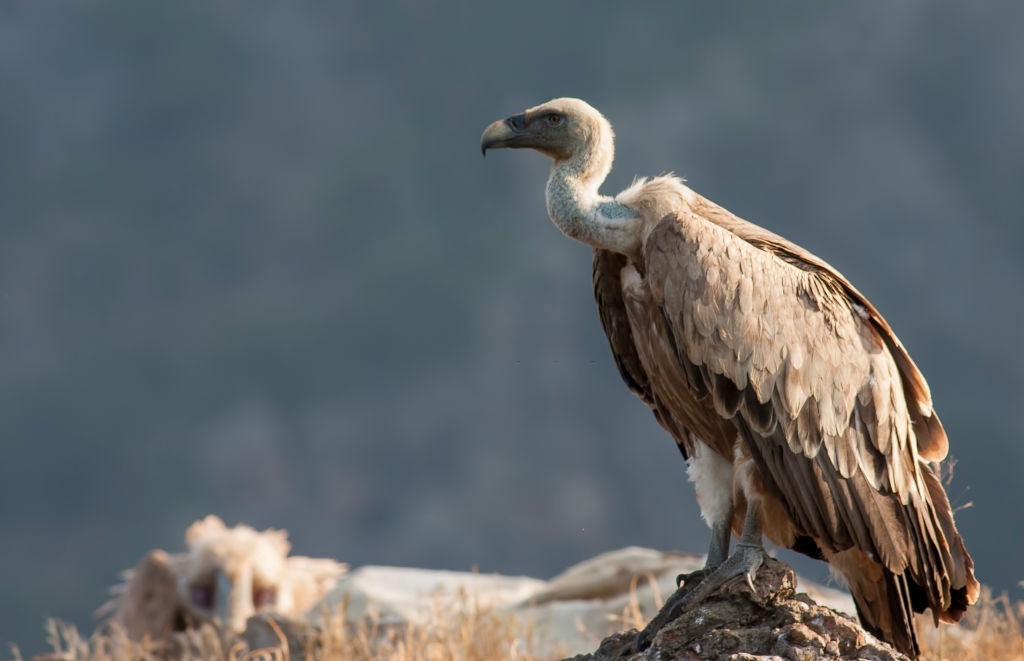 The griffon vulture is another large bird of prey found in the Cretan mountains. The mountains provide an important ecosystem and a generous food supply. You might be able to spot large concentrations (up to 40-50, especially in the summer) of them looking for food. The birds breed in colonies, nesting in mountainous regions where flocks overwinter. In this way, they escape the worst weather conditions, whilst remaining close to a food source. 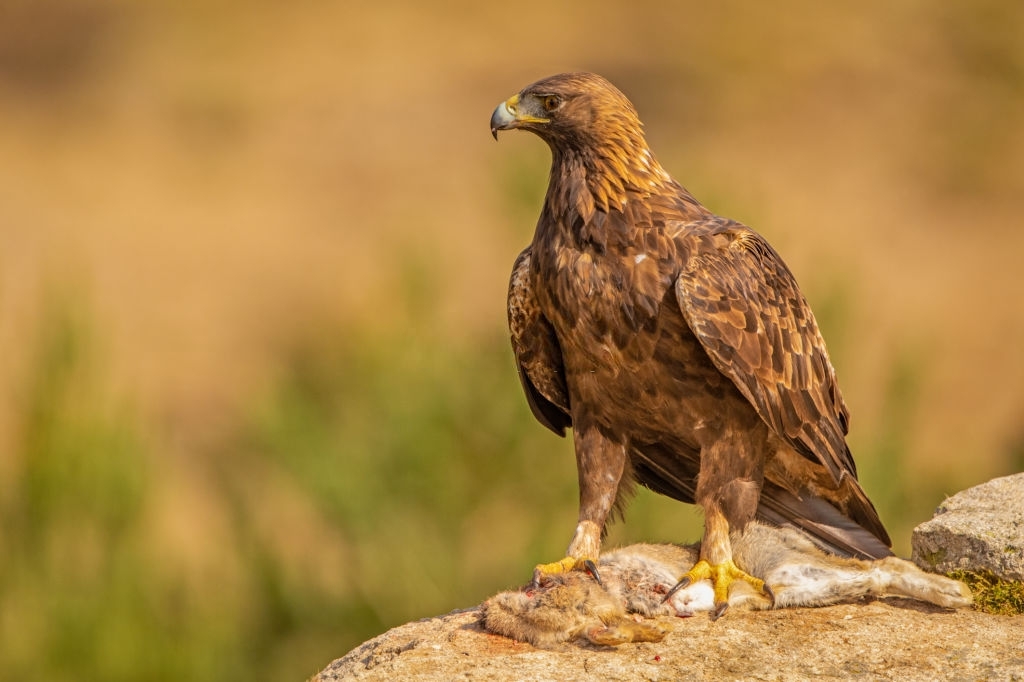 Once again the Cretan mountains afford an important habitat for the breeding and maintenance of the Golden Eagle. These birds are under intense pressure from humans; the one thing keeping the species in comparatively good shape is the relative abundance of their prey (mainly partridges). They are typically found in the broader region of Psiloritis; the mountain ranges are divided into four regions they inhabit, the NE, E, SE and W flanks. Breeding pairs hold the E and SE regions, whilst in the other two immature birds or solitary adults are to be seen. 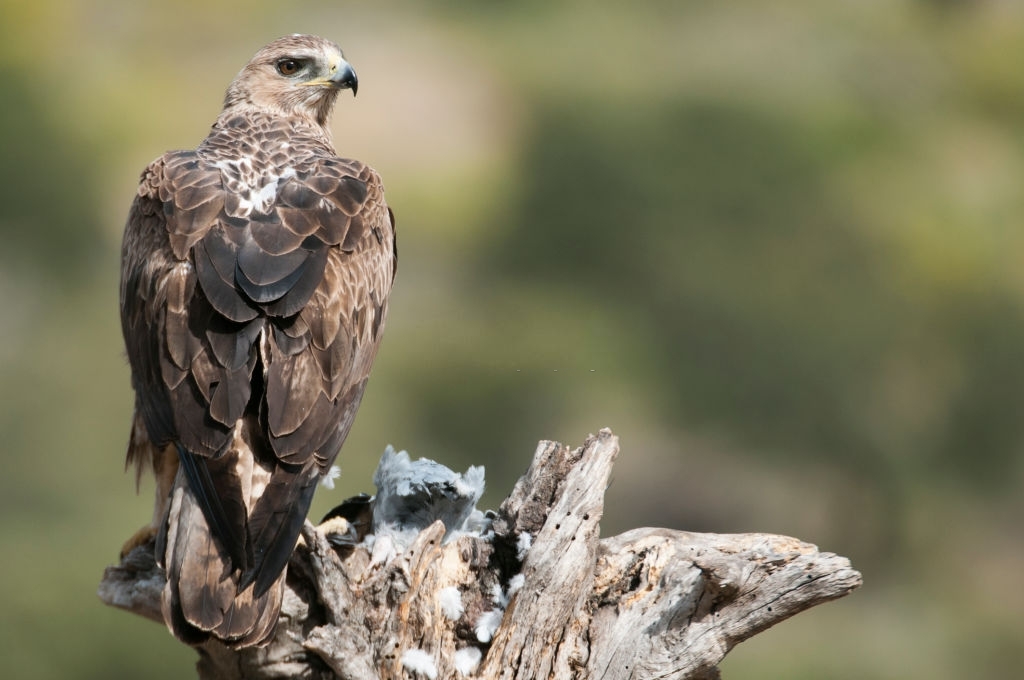 Bonelli’s Eagle, or Spizaetos or Skarovitsila as it may be called in Crete, is a medium-sized eagle – some 65-72 cm in body length, with a wingspan of 150-180 cm. Though relatively small, it is particularly aggressive, and remarkable for its speed in flight. Adults are black from above, with a white back, when seen from below they are predominantly light-coloured with flecks all over. Bonelli’s eagles inhabit mountainous regions at low to medium levels of altitude (up to 1500 m), preferring warm and rocky terrain with maquis and phrygana-types of vegetation. In Crete, they are commonly found in the Asterousia Mountains. They nest not in trees usually, but on rocks; each couple builds several nests (up to 6) which they use in rotation. Their feed on smaller birds and medium-sized mammals (rabbits, hares, rodents, partridges, pigeons etc), which they grab from the ground. About half the Greek population lives on the islands of the Aegean and Crete. It is considered a Vulnerable Species in the Greek Red Data Book. The major threats they face are poaching, habitat loss and the overuse of pesticides. 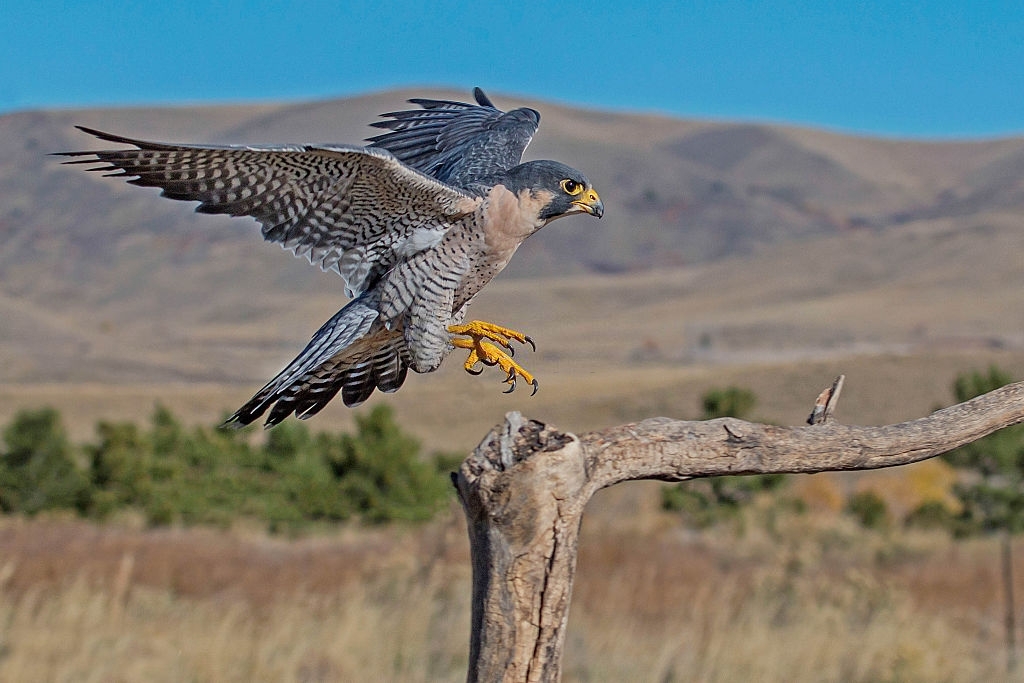 Peregrine Falcon, also known as Petritis to the Cretans, is the fastest animal known – and the most powerful of the falcons known in Greece. It can reach speeds of over 300 kph, but some records estimate it closer to 400 kph! The peregrine falcon has a body length of only 35-50 cm and a wingspan of 90-115 cm. Adults are a blue-grey colour, with horizontal stripes on chest and legs; their eyes are yellow. The young are dark brown with grey legs. One of their distinctive features is the black stripes on the side of their head that resemble whiskers or a moustache. In-flight, they can be recognized by the pointed wingtips and short tail.

Their prey is generally medium-sized birds which they take in the air by stooping ( a steep vertical attack from above); they may also eat small mammals and reptiles. They nest on steep slopes or in trees.

Peregrines are very sensitive to pesticides and excessive use has led to a decline in population. For this reason, the presence (or not) of peregrines is a good indicator of the health (or not) of an ecosystem. 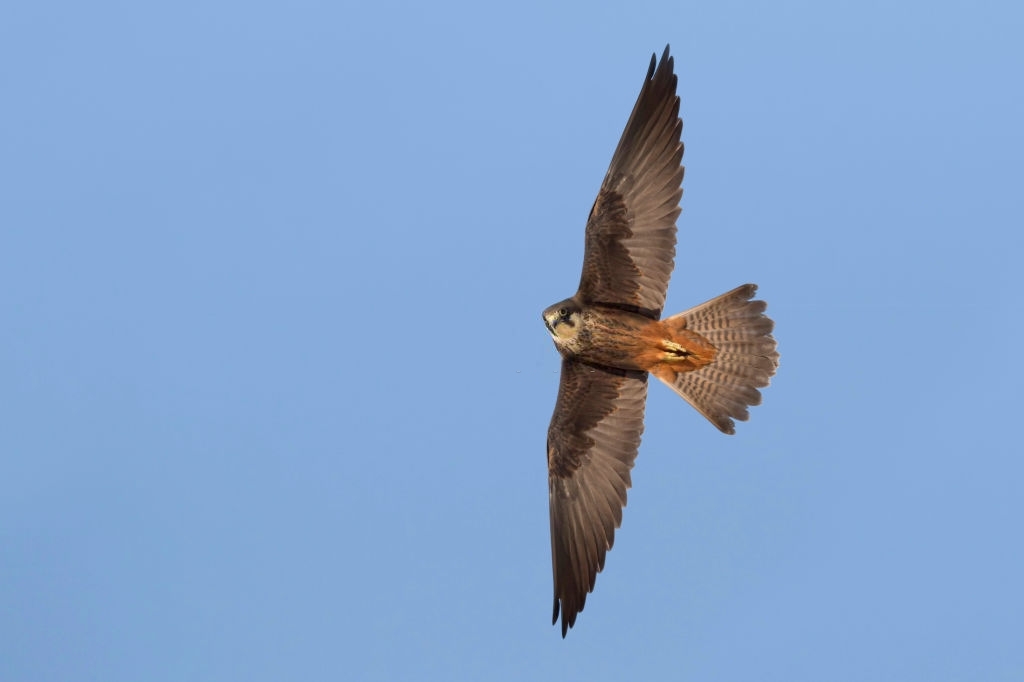 Eleonora’s Falcon is a migratory falcon, of medium size; they overwinter in East Africa (mainly Madagascar), moving into the Mediterranean in April. Greece holds 80% of the world’s population. It is known as the Mavropetritis (the Black Falcon) locally – as well as Koustogerako (geraki = falcon), the Sea-Falcon or Varvaki. The body length is only 36-40 cm, with a wingspan of 84-103 cm. It is jet black or black above and has a reddish-brown colour below, with a barred chest. They rarely hunt by themselves, feeding off large insects (eg. beetles) or small birds. It is wont to nest on cliffs in natural cavities or crevices – preferring large islands or uninhabited islets. This is a bird that desires isolation and the security it offers away from humans. Colonies of Mavropetritis in Crete are normally located on the off-shore islets – such as Dia (opposite Heraklion); the eastern end contains most of the nesting sites. The bird suffers from illegal hunting, tourist development of smaller islands where it nests, and as always insecticides.