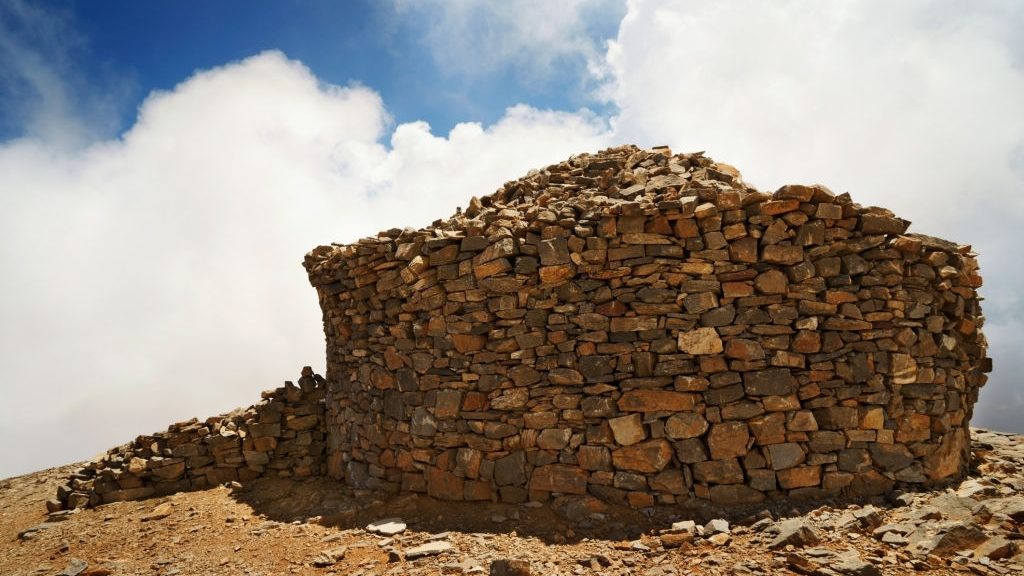 Psiloritis otherwise known as Berg Ida is the tallest mountain in Crete island. The summit of Timios Stavros at 2456 m is its highest peak. You can get there by car on dirt roads from the village of Kouroutes but there is also a hiking trail that is part of the E4 route that starts at Fourfouras. From the shelter, which is at an altitude of 1600 m, the climb to the top takes approximately 3 hours.

The route from Mountain Shelter of Toumpotos Prinos to Psiloritis Summit

Right behind the Mountain Shelter of E.O.S. Rethymno, one can see the distinctive oak tree named Toumbotos Prinos, on the left side of which begins the path (1) that goes up to the mountain top. The route is constantly uphill, on a clear path, and maintains visual contact with the saddle between the peaks of Agathias, to the east, and of Timios Stavros (die Wahres Kreuz), to the west, at almost all times. For approximately 45 minutes we climb parallel to a dry watercourse until we encounter a small cavern (2) on our right-hand side. At this point, the view of the whole south part of the Prefecture of Rethymnon is breathtaking.

Immediately after the cavern we continue eastwards and pass through a small flat area covered with scrub. From the foot of a rocky slope (3), we turn northwards, constantly following the distinct and well-marked path, which goes along the south-western slope of Agathias. We continue until the saddle (4), where we arrive after approximately 3 hours, depending on our speed.

From this point, a large view of northern Crete, as well as of the Cretan Sea, opens up ahead of us. Following the mountain line to our left, in 20 minutes we reach the summit of Timios Stavros (5), the highest peak of Psiloritis and of all Kreta, with an altitude of 2.456 m. While the view from Pachnes, in Lefka Ori, at 2.452 m, is ravishing, on account of the multitude of lower peaks surrounding it, the feeling one gets gazing from the top of Psiloritis is unique in its own way. This is due to the fact that the summit of Timios Stavros stands lone and imposing above all central Crete. A great place to rest and take in the view. When the weather is clear, the panoramic vista is absolutely stunning.

Spending the night on the mountain top, in a clear yet cold summer night, is another unique experience. The dry-stone chapel of Timios Stavros does offer shelter, however, one must keep in mind that climbing to the peak of Psiloritis demands fair weather conditions. The fierce northern wind causes problems; particularly in periods when snow can be found on the northern slopes. The wind can turn the ground into a hazardous icy trap. North of the chapel, there is a cistern where melted snow water usually gathers. This is better used after it is sterilized only.