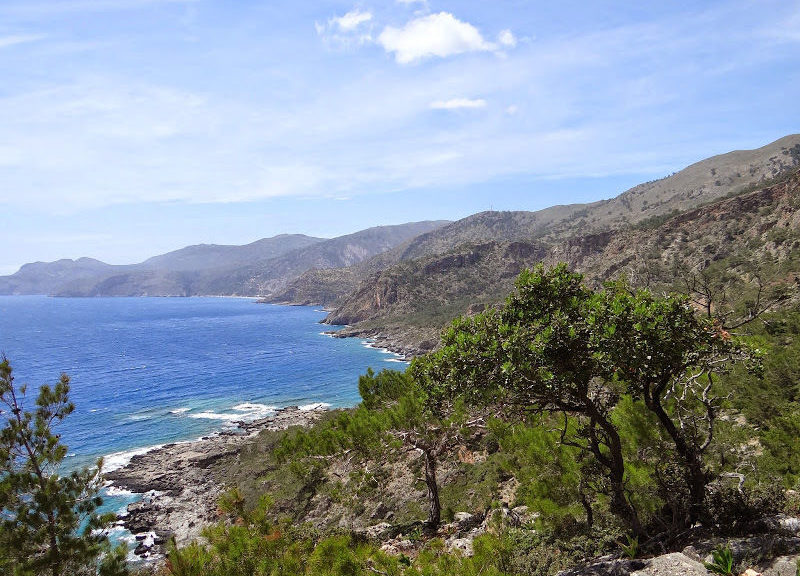 Sougia is the starting point for a lot of different hikes on the south coast of the island of Crete. Located about 70 km from Chania, Sougia is known as an alternative and laid back holiday destination, where tourists come back year after year; while the hippie vibe has lessened, a lot of the small bays around Sougia are nudist friendly and mass tourism has yet to affect the village. From Sougia, a coastal E4 route begins that takes you through to the ancient city of Poikilassos, where a few scattered ruins remain.

To continue, you will have to cross one of the most challenging and remote parts of the island towards Domata beach. From there, you will need to walk the next part towards Agia Roumeli to get a ferry connection to Chora Sfakion. Of course, you can also choose to walk the whole route until Chora Sfakion in its entirety.

Von der Ansiedlung von Sougia (1), we move east and walk along the north boundary of ancient Syia. Then, we begin to ascend the slope in a north-easterly direction, until we find a cart track on our right, which we follow.

The cart track winds round the slope, until a small plateau with terraces and remnants of old structures (2). From this point, the entire bay of Sougia, as well as the unique landscape created by the outlines of mountains sloping down to the sea to the east, open out in the distance.

At the end of the cart track, we follow the path that crosses a landscape in which pine trees alternate with carob trees and shrubs. Descending slightly, we cross a small stream and then reach an old threshing floor, in a terraced area, on our right. Down below to our right are small rocky beaches. Next, the path goes slightly up and down along the hill. We cross several small streams, until we see a distinctive cliff above us, to our left. As soon as we reach the opposite bank of the stream we encounter, we climb to a saddle (3) and we immediately begin to descend the steep slope along the old path, until the small gorge, which we follow south.

Approximately 200 m after we pass by a distinctive cave. Here we leave the stream and come out onto its eastern bank. After a while, we see the small bay of Agios Antonios (4) ahead of us, which we bypass, following the path along the slope, going slightly up and down. Alternatively, we can take a right-hand side road which descends to the chapel of Agios Antonios and then rejoins the main path. The distinct path crosses a landscape of alternating high and low vegetation and small streams.

We leave Agios Antonios behind and begin to descend slightly. As we approach a small stream, we see an impressive deep cleft in the rock on our left. After this point, to cross the stream, we walk beside it for 100 m and then we come out onto its eastern bank (5). After the stream, we begin to ascend the steep slope towards ancient Poikilassos. The path now becomes very steep and winds among pine trees and the rocks of the slope until we reach a small stone church and immediately after that, a spring with potable water. After the spring we continue uphill. On our right we see a distinctive rock, after which the trail turns sharply to the left, crossing the ruins that are scattered on the slope until the remnants of the fortress in the saddle of Poikilassos (6). This section of the route is one of considerable difficulty, especially when dealing with northern winds.

From this point, we enjoy a lovely view of Sougia to the west and the east, until Domata. If we chose to, we may ascend to the top of the hill, where the chapel of Profitis Ilias is located. Here, the view is panoramic and of breathtaking beauty; we can distinguish Lissos, Sougia, Domata, a big part of the Lefka Ori massif, and the island of Gavdos, south, in the distance.