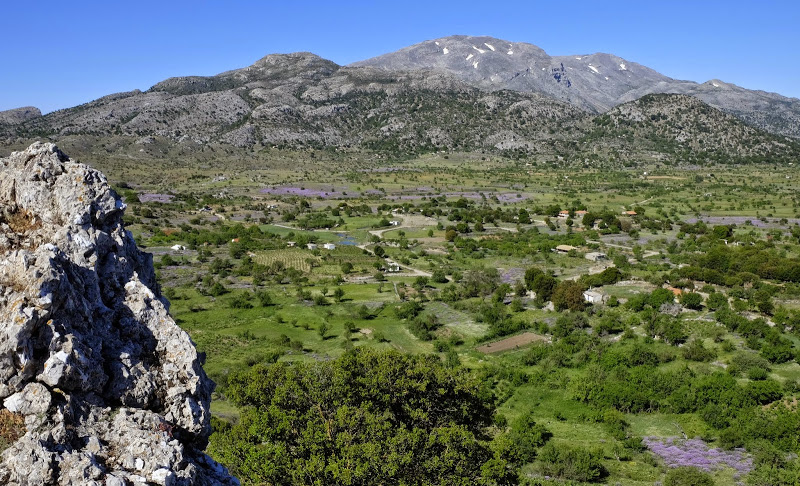 There are two options for those wishing to take the path from Agios Georgios village to the Plateau of Katharo. One of them is through the church of Agia Pelagia and is considered the easiest of the two; an easy and peaceful trail starting at an altitude of 840 m before reaching the plateau at 1150 m. The second path, described in detail below, crosses through the gorge of Havgas and is a more challenging route. The rocky canyon does not see a lot of visitors other than of course the friendly mountain goats and birds.

From the small cemetery (1) at the eastern exit of Agios Georgios, we follow the dirt road towards the east. After 1.300 m, we come to a junction (2), the right-hand branch of which leads to the plateau of Limnakaro. On our left lies a big water storage pit; we walk along its eastern bank and 850 m after the Limnakaro junction we come upon a smaller water storage pit (3), which we bypass on its north-eastern side. We then reach the entrance to the Gorge of Havgas (4), where we see a structure made for channelling the water of the gorge into the water storage pits.

At this point, we enter the gorge, the course of which we follow, except when we need to avoid the river flow or any remaining puddles of water.

During winter, when the water flow is constant, passing through the gorge should be avoided. This part of the route can be bypassed by following the alternative route, which begins at Agia Pelagia. For approximately 1.700 m the gorge goes southwards and walking in it is fairly easy. It then turns eastwards for about 800 m, a section along which there are a few narrow as well as certain quite difficult uphill passages. Towards the end, turning rather southwards again, we climb to a very narrow passage and then reach the confluence of two streams. Here there is the dirt road (5) where the first part of the aforementioned alternative route leads to (the one that begins at Agia Pelagia of Oropedio).