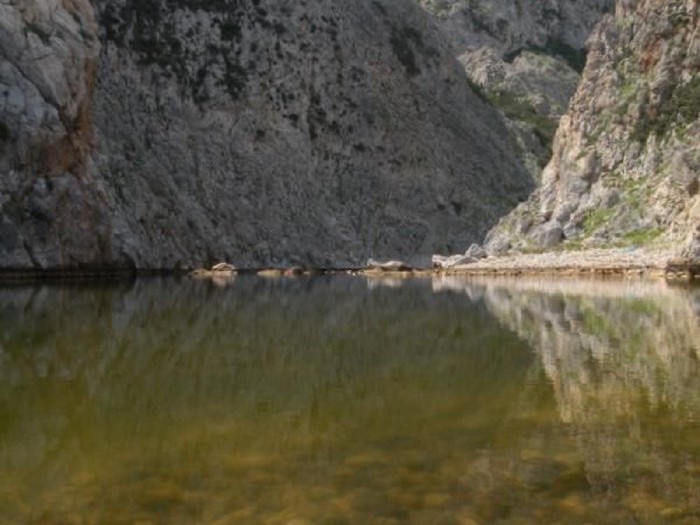 The village of Agios Georgios is a rural Cretan village at an altitude of 840 m, in the Lassithi Plateau. The distance from Malia in the north is only 24 km but it can also be reached by car from Agios Nikolaos (40 km). It also marks the starting point for the hike to the peak of Dikti in the south (2.148 m) and possible birthplace of the Olympian god, Zeus. To reach Katharo Plateau from Agios Georgios you can either take the route through the church of Agia Pelagia or the more challenging path that crosses the gorge of Havgas. A very quiet and peaceful part of the E4 trail with few visitors.

The route from Agios Georgios to Katharo Plateau

We start by exiting the village heading east, and a little beyond the junction to Limnakaro, east of the large water storage pit, there is a right-hand turn-off which leads to the chapel of Agia Pelagia (1).

We follow the uphill cart road east of Agia Pelagia, and then an easy to discern path which snakes up the slope, along a small gully, appears. This gully leads us to the top of the slope, where there is a small plateau (2) which we leave behind on our right-hand side. We continue to ascend on a barely discernible footpath, in a south-easterly direction, for approximately 300 m. Then we reach a small saddle (3) on the mountain line, at an altitude of about 1.150 m. From this saddle, the path goes along the 1.150 m altitude contour in a southerly direction; a flat area with abandoned terraces can be seen down below to our left. The path now traces a U-shaped course northwards, and then turns towards the south-east; 1.100 m after the saddle, we come to an unsurfaced road near the chapel of Timios Stavros (4) (the True Cross), which can be seen on a low elevation, to the north.

We follow the main dirt road eastwards for approximately 1.700 m and continue, still on the main unsurfaced road, in a north/north-easterly direction for another 1.000 m, until we come upon another passage, where two streams meet (5). There, we come to the stream that connects with the Lassίthi Plateau, via the gorge of Havgas.

We continue until the settlement of Kopraki (6); we then pass through the settlement and follow the main dirt road which goes along the northern side of the plateau, in an easterly direction. Small clusters of farmhouses can be seen at the foot of the slope, next to the unsurfaced road (7) up to the main settlement of the Katharo Plateau, where the asphalt road from Kritsa ends.