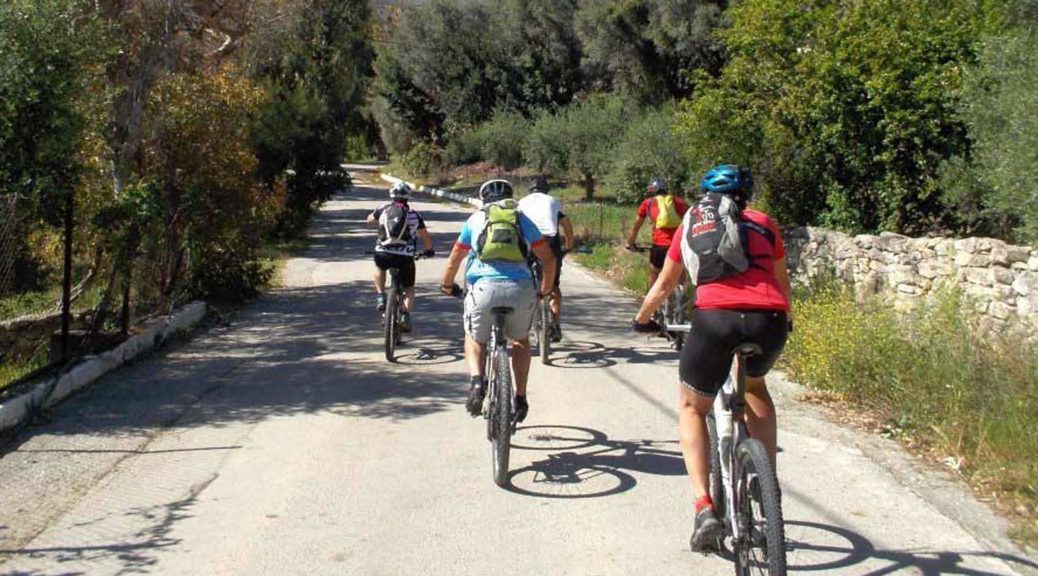 This part of the E4 route that traverses the length of Crete island, starts at the majestic monastery of Arkadi. At a distance of only 20 km from Rethymno, it is a popular attraction for religious and non-religious visitors, who come to admire this architectural landmark. The monastery is also a symbol of Cretan resistance for the role it played during the Cretan Revolution and war against the Ottomans. The route from Arkadi to Margarites passes through the archaeologically significant area of Eleftherna.

The E4 route from Arkadi to Margarites

From the monastery of Arkadi (1), we follow the asphalt road; after passing by a rainwater tank on our right-hand side, we reach the ridge of a hill where a small plateau can be seen to our right. This is where a path (2) following a north-easterly direction begins.

The old, indistinct path descends gently on a scrub-covered hill. After approximately 1.200 m, it leads to a hollow of the northern side of the hill, where the ruins of a small monastery (3) can be seen, among oaks.

From the southern side of the monastery, we continue westwards for a few metres, until a point from where we can distinguish a spring with drinking water below the dirt road. After the spring, we cross the stream and climb westwards, until the beginning of a dirt road which we follow parallel to the fencing of an olive grove to our left.

After 900 m we arrive at a crossroads (4); we take the left (northern) branch, descending to the asphalt road, slightly before a small church, at the western exit of the Eleftherna village (5). We pass through the central road of the village. On our left-hand side, where the last houses are, a descending cement road begins, next to a shrine (6); we follow it for 80 m and on our left-hand side we see an old footpath, which meanders down the slope, underneath large olive trees.

Further down, we come to an unsurfaced road which we cross and continue until we come across a distinctive row of cypress trees, next to a small watercourse. Next, we turn southwards, following the western bank of the watercourse. At the end of the clump of cypresses, we cross the watercourse (7) and climb the slope in a northerly direction. The old path leads us to the foot of a rocky hill, just before the huge carved water tanks of Ancient Eleftherna (8). After these, we pass through the northern ridge of the hill, continue for a while on its eastern slope and then begin to descend, towards the east.

At this point, the footpath is very hard to discern; great care is required.

Going down, we come to a dirt road which we take and arrive at the archaeological site of Ancient Eleftherna (9), which we bypass from its northern side. Having passed through a magnificent ravine, we begin to ascend the slope, until its top, where a small chapel (10) can be seen next to an asphalt road. We continue for 30 m southwards and take the dirt road eastwards. After 400 m, it leads us to an asphalt road, which we follow northwards until the small traditional settlement of Kato Tripodo (11).

We pass through its few houses and continue on the asphalt road for approximately 800 m. On our right-hand side, at the north-western corner of a dry-stone wall, the beginning of a footpath (12) can be seen; this goes down into a verdant ravine (13) and then climbs until the Primary School of the village of Margarites (14). A little further beyond the Primary School, we turn right into a narrow alley; after a few metres, we arrive at the central square of the settlement.