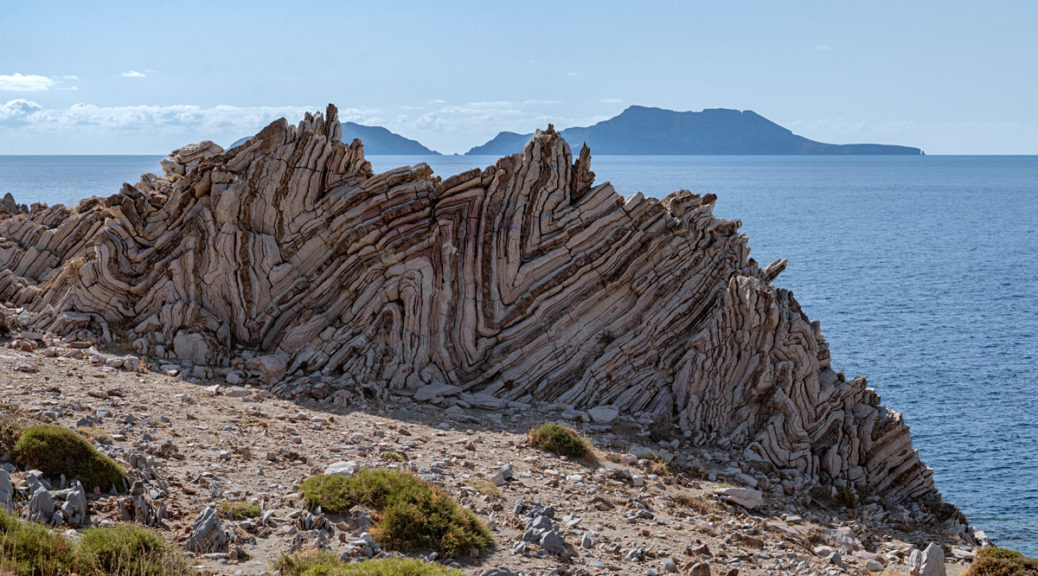 The small chapel of Agios Pavlos is located on the coast next to the beach of the same name, east of Agia Roumeli. It can be reached on foot from the E4 route starting in Agia Roumeli (approximately 5 km) or the village of Agios Ioannis to the north. There are no amenities nearby so make sure to come prepared. From Agios Pavlos, you will follow the path towards Loutro, another secluded and hard to reach, coastal village, with its stunning turquoise waters and charming fish tavernas.

The E4 route from Agios Pavlos to Loutro

From the chapel of Agios Pavlos (1), the path begins to climb again above the beach, through sweet-smelling pine trees. After a while, it descends lower, running parallel to the beach, through a pine-covered hillside. Soon, you will pass close to the church of Agioi Pantes, and after 1 km you come to a branch of the road (2) with a wooden sign showing the way to the village of Agios Ioannis.

Here, we go right, constantly following the route parallel to the sea. During this section of the route, the sandy beach stretches below us. At the edge of the pine-forested area and the sandy beach (1 km after the junction to Agios Ioannis) we encounter a steep rocky slope (3) which we climb, and then reach a flat, bare landscape above the sea. For the next 500 m, the path will cross through scree slopes and gullies.

Next, we see a stone hut with a sheepfold, on our right. Immediately afterwards, we pass through two gullies, next to which we encounter first a rectangular and then a circular stone hut. After 500 m from the circular hut, the path runs parallel to the top of the cliff above the sea and passes by an old stone house. We have now hiked for more than 6,5 km in total since Agios Pavlos, and we start to descend to the outlet of the Schlucht von Aradena and a beautiful beach named Marmara (4). This area was probably a quarry for the ancient town of Phoenix.

After Marmara, we continue on a path over the rocky coast and descend to Likos beach (5), where there is a Byzantine chapel. (From Likos, we can follow the dirt road leading to the villages Livaniana, Aradena und Anopoli). Then, we bypass a small rocky hill from its north side and arrive at the small bay of Finikas (6). We leave Finikas behind us and begin to climb towards the top of Cape Mouri. On the ridge of the hill, we encounter old cisterns and the ruins of the old fortress of Finikas, on our right. From the fortress we can distinguish the settlement of Loutro (7), down below, to which we descend following the distinct path.