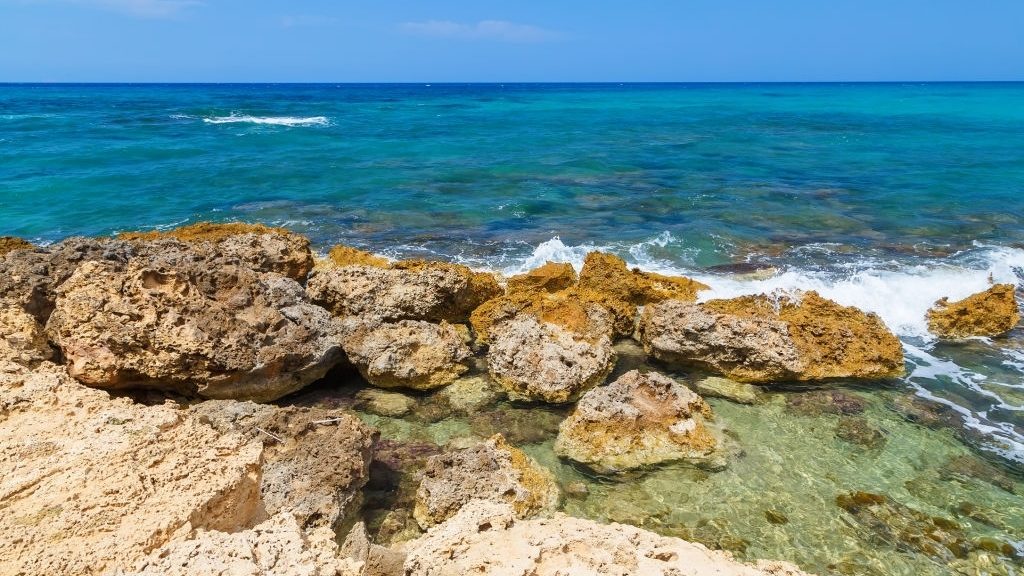 This route links some of the most significant sights in the Heraklion prefecture and passes through traditional settlements, vineyards, and historical monasteries. It is a fairly easy and gentle route. However, museums and other sights demand quite a lot of time; therefore, one may choose to break it down so there is enough time to see them individually.

This route begins at Thalassokosmos, the largest aquarium in the Eastern Mediterranean, which is located at the coastal settlement of Gournes, east of the city of Heraklion. It is one of the biggest European aquariums; it has 60 tanks of various sizes and 100 observation points. During a visit to Thalassokosmos, you will have the chance to get to know the marine life of the Mediterranean and other areas, and see sharks, sea horses, jellyfish, huge groupers, corals and maybe Caretta-caretta turtles (the aquarium temporarily hosts rescued and wounded turtles until they are able to be set free in their natural habitat).

In front of the aquarium, there is a sandy beach, for those who wish to go for a quick swim even though there will be plenty more opportunities during the day. We continue southwards, pass through the village of Gouves and continue to the small settlement of Skotino. From here on we can visit the Agia Paraskevi cave, one of the most important sacred caves of Crete, where the goddess Artemis was worshipped. At the entrance of the cave, there is the Byzantine chapel of Agia Paraskevi and then further into the cave there is a large chamber with stalactites and stalagmites. We next return to Skotino and continue in a southerly direction towards Kalo Horio, a small traditional settlement. A little further south we come to the main road which leads to Kasteli; this road passes through a narrow, verdant gorge with plane trees. The village of Kasteli is named after the fortress that used to dominate the scenery of this mountain plain, which was one of the largest grain-growing regions of Venetian Crete.

From Kasteli, we follow the road in a south-westerly direction, pass through the little agricultural settlement of Evangelismos and arrive at Thrapsano. Thrapsano is one of the most important traditional pottery centres of the island, with numerous workshops which continue the great tradition of Cretan pottery. The potters of Thrapsano used to be so famous that each year they travelled to different parts of the island, and stayed in several towns and villages for a period of time, in order to make large pots. This procedure was known as ‘vendema‘, from the Venetian word ”vendemmis”, which means “harvest”. A visit to the pottery workshops and, if possible, to the historical Primary School of Thrapsano is recommended. In the school, one can see the murals made by a German-Austrian painter during the German Occupation when the building was requisitioned by the German forces. There is also a large inscription with an excerpt from a German poem dedicated to the Infantry.

We next travel a little further north of Thrapsano, reach Apostoli village, and then continue to Smari, which is one of the most interesting traditional settlements of Heraklion. It has been listed as a protected village and has also been selected as a European Destination of Excellence (EDEN). East of the village a hill dominates the landscape; on top of this hill, the ruins of the Minoan citadel of Smariare are to be found.

Episkopi is an exclusively agricultural settlement located east of Smari. It has numerous Byzantine churches, a fact that indicates a vast religious tradition; in the past, the village was the seat of the Bishop and it was even named after this (Episkopί = episcopal see).

The raki distilling process, during which tsikoudia (the traditional spirit of Crete) is produced, takes place every year after the grape harvest, and it is a famous tradition of the region. South of Episkopί and having passed through the village of Sgourokefali, we can visit the Agarathos Monastery, one of the most important monasteries of the Heraklion πrefecture and one of the oldest of Crete. It was founded in the Second Byzantine period and obtained its fortress-like shape in the mid-16th century. During the Venetian years, it served as a cradle of education; important scholars, such as Meletius Pegas and Cyril Lucaris spent some time in the monastery.

Next, following the road in a west-northerly direction, we reach the village of Mirtia (also known as Varvari), the birthplace of the great Cretan author Nίkos Kazantzakis. A museum. dedicated to Nikos Kazantzakis is to be found in this little, picturesque village. It is a small, recently renovated museum with a modern design; its exhibits shed light on many aspects of the life and work of the famous author. After we leave the village, we pass through one of the most traditional Cretan vineyards, which stretches as far as Skalani village. Here, we can make a stop to enjoy a meal at one of the traditional tavernas of the village. Then, upon our return to Heraklion, we come to the archaeological site of the celebrated Minoan palace of Knossos. A visit to Knossos requires at least two hours, during which one has the chance to admire the unique features of the palace, such as the Throne Room.