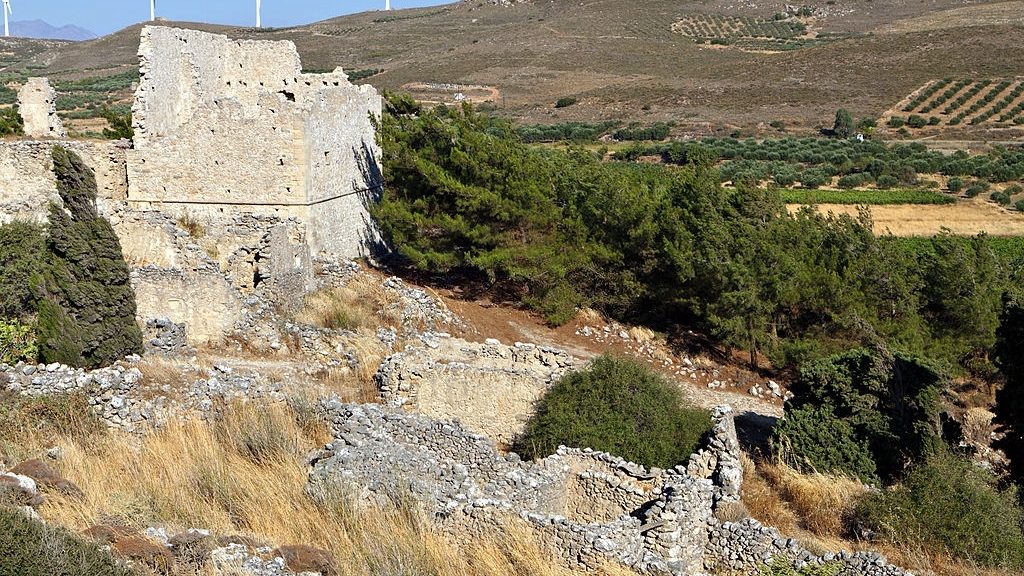 Papagiannades is a small traditional village with a population of less than 150 people, on the old stretch of road between Ierapetra and Sitia. The drive from Sitia is 20 km long and takes about half an hour, the distance from Ierapetra is 40 km. Moving east, the E4 European walking path crosses through the village heading towards Ziros. Remains from the Minoan civilization have been found around the area.

Passing through Papagiannades (1) – the village is built on a steep slope – the path climbs up and eastwards to the mountain line, where we reach a water cistern (2). Next, we will cross the asphalt road and follow the dirt road that leads eastwards. After 500 m, we come upon a fork (3) and turn slightly south-eastwards. After 1.000 m, we reach the mountain line (4) where one of the first wind farms of Crete can be seen. The Ziros – Handras plateau is known for its local wine and raki production with farms as far as the eye can see. Some of the windmills are still in operation today.

From there, the view towards the plateau of Handras opens up to the east. We begin to descend gently and pass through a little abandoned settlement with a chapel. We continue on our course to the village of Handras (5). Following, we walk along the central road of the village, until its southern exit. From there, we follow the asphalt road for 4 km and pass through the narrow valley that connects the plateau of Handras with that of Ziros. We have reached our destination (6).

Alternatively, we can follow the asphalt road from Papagiannades to Handras, to visit the abandoned settlement of Etia, where the villa Dei Mezzo, one of the most important Venetian monuments of the Cretan countryside is found. In a distance of 1km from Handras, you can also visit the abandoned castle of Voila, where the family of national poet Dionysios Solomos is believed to have come from. The small chapel of Saint George with the impressive wall paintings is found nearby next to a fountain spring.

Ziros is one of the largest of the villages in this region of east Crete, with about 700 residents. Even though important remains have been found around the area from the Minoan and more recent Venetian and Byzantine occupation, no systematic excavations have occurred yet.