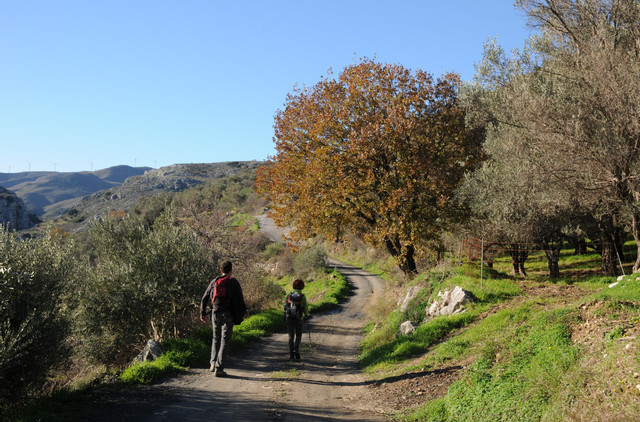 The gorge of Rouvas, also known as Agios Ioannis from the monastery nearby, is located in southern Crete, about 45 km from the capital Heraklion. The village of Rouvas nestled between Zaros and Gergeri has also given its name to the nearby forest of Rouvas. A very important ecosystem, with holly trees, pine, plane and cypresses on the south-eastern side of the Psiloritis range, the highest mountain on the island.

The E4 route towards the village of Asites is a beautiful uphill trail with stunning views of the valley below.

From the monastery of Agios Ioannis (1), we take the dirt road which passes through the south-eastern corner of the forest of Rouvas, in an easterly direction. Then, it climbs on the eastern slope and after 4,5 km (approximately 1 hour and 35 minutes), leads us at an altitude of 1.300 m, where it splits (2) into two branches, northwards and southwards. The southern branch leads to the village of Gergeri.

We take the northern branch and after 1.900 m we come to a small flat area with a cistern (3) on our right-hand side. Immediately after, we reach two right-hand branches which we ignore. We continue on the main unsurfaced road for approximately another 300 m, until we get to a plateau and a right-hand branch (4). We then turn right (eastwards), through sparse vegetation of evergreen oaks. After 5 minutes, the dirt road leads us far into the plateau, where a well and a couple of watering troughs can be seen (5), amongst some characteristic rocks and oak trees. The water of the well is not drinkable.

From this point on, we begin to ascend along a small gully, on the western slope of the peak of Gyristi. We initially walk among oaks and bushes, which gradually thin out. The footpath is not easy to discern, however, the signs and red marks indicate the right way. After about one hour of ascent (approximately 1.100 m), we reach a saddle (6) at an altitude of 1.620 m, north of the peak of Gyristi (1.774 m). The distant view of the city of Heraklion, to the east, and of the whole basin and the forest of Rouvas, to the west, is breathtaking. If we continue northwards, along the ridge, for approximately 1 hour and 30 minutes, we shall reach the top of the peak of Koudouni. From the saddle, we begin to descend the eastern slope, following the gully.

On our left side, we see a large swallow hole. We pass through a completely bare, rocky area and after about 35 minutes we come upon another swallow hole, on our right. We walk along the northern edge of the swallow hole and continue climbing in a north-easterly direction; after approximately 10 minutes we arrive at a small flat area. We continue in a north-easterly direction until we get to a characteristic rock with a direction-showing arrow carved on it (7). From this spot, we follow the fairly distinct path, which goes along the hollow of the slope in a south-easterly direction, and after approximately 35 minutes, the Mountain Shelter of the Mountaineering Club of Heraklion appears down below.

We continue until we get to a small water spring next to a characteristic oak, which has given its name to the area (Prinos = oak). From the spring, we continue southwards a little more, for 2 minutes, until we reach the mountain shelter, at an altitude of 1.100 m (8). From the spring we follow the footpath which descends to a small plateau, passes through a small clump of oaks, and begins to follow a small gorge.

After approximately 600 m (20 minutes) of descent, we walk along a small boundary fence and reach the end of a dirt road (9), which we follow. Initially, the unsurfaced road heads south; we ignore a left side road, trace an arc towards the north and then reach a small stream (10). From that point on, we continue on an asphalt road. We gently descend among olive groves, in an easterly direction, ignoring any side roads. After 3 km in total, we come to the main road, south of the village of Ano Asites (11).