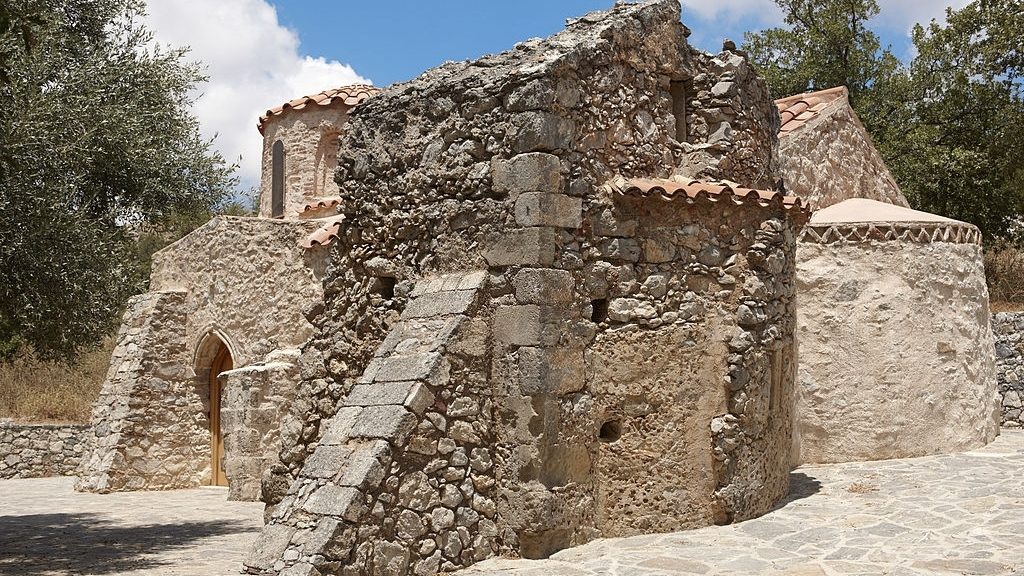 We pass by the beautiful Byzantine church of Agio Pnevma (the Holy Spirit), and follow the cart track on the north side of the settlement in an easterly direction, for about 650 m. At the end of the dirt road (6), we continue eastwards for another 200 m, on a vague path. Then, we turn left (7) and begin to climb steeply. Here we pass the remains of dry-stone walls. The slope is steep, rocky and bare; we ascend towards a saddle (8) and arrive after 700 m of laborious climb. At this point, we enjoy a panoramic view of Krioneritis and of Lefka Ori to the west, of the bare mountain range of Asiderotos to the south, and of the small plateau Gious Kampos to the north. Gious Kampos or Plain of Eos, is linked to Eos or Aurora in Latin. In Greek mythology, this was the goddess that personified dawn. She was the daughter of the Titans Hyperion and Theia, a sister of Helios and Selene.

We continue eastwards, walking along the mountain line and cross several clefts in the rock. We climb on the steep slope for a few metres and then come to a small flat area. By now, we can see black and yellow marks that lead us in a narrow gully. We follow it for approximately 15 minutes, where we reach an even smaller flat area. From this point, we proceed for approximately another 1.000 m, and then the summit of Kedros appears ahead of us, to the east. Down below to our right, the chapel of Profitis Ilias can be seen.

We climb a little higher and then come to a sign (9) that leads us to Gerakari, northwards, to our left. We continue following the frequent markings, until the high mountain top at a 1.776 m altitude (10). The panoramic view from here is magnificent; almost the entire Prefecture of Rethymno stretches out before us; we can see Psiloritis to the east and Lefka Ori to the west. On the top, there is the little chapel of Analipsi (Ascension). We return to the point where we had encountered the sign, and follow a somewhat north-westerly course, descending to an altitude of 1.500 m, where we come upon the chapel of Profitis Ilias (11). A little further down, there is a spring with cool water and a small shrine next to it.

We descend going through a big, almost vertical gully and reach a ravine (12) with oleanders. Immediately after, we come to a dirt road (13), which we follow in a north-westerly direction, to the left. We then turn again, in a north-easterly direction and, below us, the village of Gerakari comes into view. By now, we have left the bare, rocky landscape, and walk through cherry orchards. We ignore the many branches of the main unsurfaced road until we reach the main road (14) that connects Spili with Gerakari. We follow this road to our right. After passing by a fountain with drinking water, we enter Gerakari (15), on the northern slope of Mount Kedros.