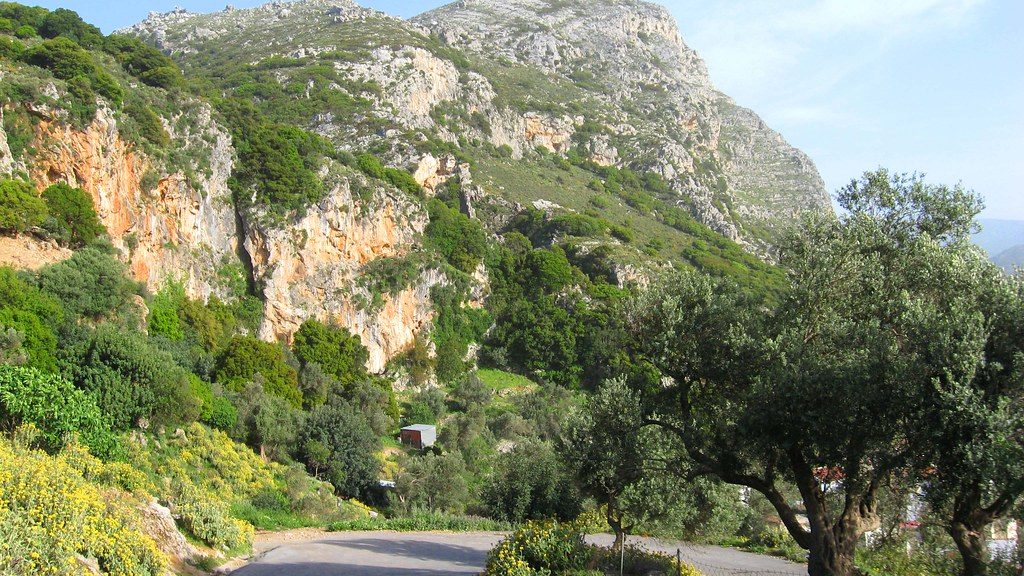 This part of the E4 route in Crete island is relatively easy, on dirt and paved roads. It starts at the village of Agkouseliana, that stands at the northern edge of the Koxare plateau and crosses the villages of Katsogrida, Atsipades, Plakias and Mixorrouma. The gorge of Kourtaliotiko frames the scenery in the south. Archaeological findings in the region of Agkouseliana have brought to light objects from the Roman period and it also played an important role much later during the Cretan War for Independence after 1866.

We follow the road from Agkiouseliana to Paleoloutra and turn at the first branch (1) of the asphalt road, in a south-easterly direction. The route now passes through the big olive grove of the plain of Agios Vasilios.

After 1,6 km on the asphalt road, we reach a small ravine on our right-hand side. We cross a small bridge (2) onto a dirt road, which we follow straight, eastwards, for 500 m. We then come again to the asphalt road (3), which after 1.5 km leads us to the eastern side of the settlement of Koxare. There, we reach the main road (4) that connects Rethymno and Plakias.

From Koxare, we follow the asphalt road that leads southwards, to Plakias. After 2 km, we come to a vague dirt road (5) on our left-hand side, which goes down to a watercourse, in a north-easterly direction. After approximately 200 m, we cross onto its eastern bank, and follow the unsurfaced road parallel to the watercourse, for about 300 m. We then turn right and follow the main dirt road, initially in an easterly and then in a south-easterly direction, ignoring any turn-offs. After 1,5 km, we see a small chapel to our right, and then we pass through the small village of Agίa Pelagia (6). We then continue on the asphalt road for about 300 m, until the village of Mixorrouma (7) and the main road that connects Rethymno and Spili. We continue on the main road and, having passed through Dariviana (8), we arrive at Spili (9).

Here we can rest by the beautiful main square with its refreshing waters and enjoy a coffee or meal.