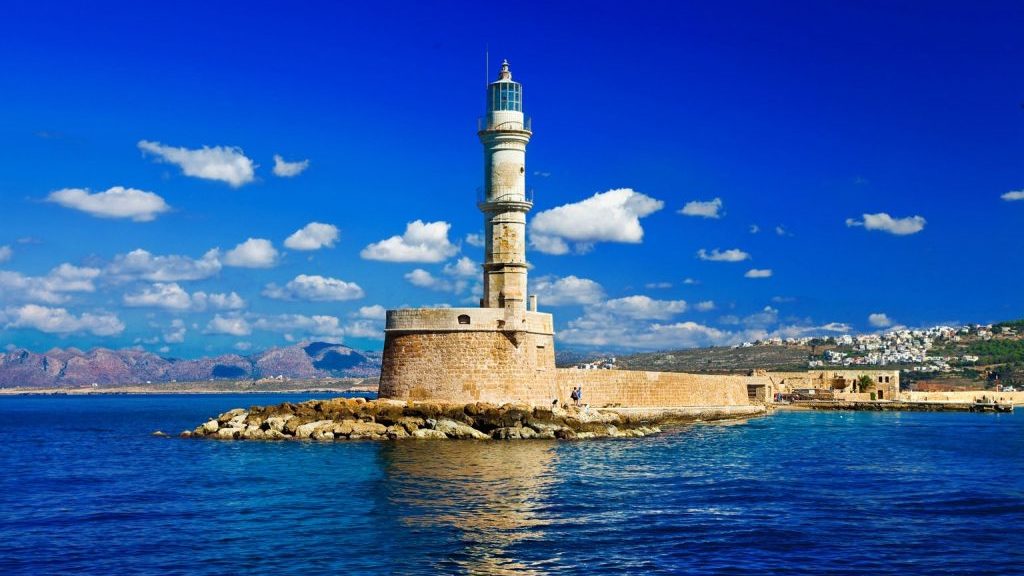 The Venetian port of Chania, including the Venetian lighthouse, is one of the symbols of the city and a favorite walking area for locals and visitors alike.

Its original construction is placed between 1320 and 1355; later on, between 1353 and 1364 it was abandoned for being too shallow and overly exposed to the strong northern and western winds. From then on, the port of Heraklion, which was bigger, was upgraded as the most important one in Crete. The decline of the port of Chania continued with the fall of the city to the Turks in 1645; the conquerors did not involve themselves in its maintenance or repair. Finally, it was Muhammad Ali, the viceroy of Egypt (Crete was under Egyptian rule between 1831 and 1841) who realized the importance of the port to the local economy. For that reason, he repaired the pier and conducted dredging works, which were completed in the Cretan State period.

The Lighthouse of Chania

The lighthouse of Chania differs from others of its time and cannot be classified in any standard lighthouse category. The architecture reminds one of a minaret, and it does not include a lighthouse keeper sleeping quarters, given the fact that it is located in an inhabited area. It is 21 metres high, its beam could reach a distance of 7 miles, and it is one of the oldest lighthouses of Europe, if not the entire world. Τhe foundations were laid by the Venetians on natural rock, between 1595 and 1601. Many of its characteristics remind one of the local, Venetian architecture. The material used for building the city walls was also used for the construction of the lighthouse, which has an octagonal base, a 16-corner middle section and another, circular section. In 1839 it was upgraded with the latest lighthouse technology of the time. The stairway of the eastern side and the peripheral parapet are Turkish additions.

The Venetian shipyards (Arsenali, in Italian) were used for the repairing of ships during the winter, in the years of the Venetian rule. The largest complex was built between 1526 and 1599 and it consisted of 17 vaulted constructions or domes. The Moro arsenals, “Neoria” (named after the governor or Provveditore Generale) were built in 1607. Only two of them survive entirely today after the third one collapsed during the bomb-raids of 1941. Nowadays, a group of 7 continuous domes is preserved-along with another one further to the west, the “Grand Arsenal” (today, the Centre of Mediterranean Architecture). Only two “Neoria” are preserved intact from “Moro” complex, at the heart of the port, while in the position of the demolished “Neoria“, the stone building of the new customs of Chania was constructed, which is today surrounded by two squares.

Of the largest complex of arsenals, 7 domes survive, plus the Megalo Arsenali (= big arsenal) which houses the Centre for Mediterranean Architecture. The rest were demolished during the Turkish occupation when the role of the port had already been diminished and maintenance was poor. The ones that survived were used as military warehouses.

In order to understand the original use of the arsenals, one must know that they were open to the sea, and water would flow into them up to a certain point. They were interconnected by arched openings, while one could enter them via one of two gates; the main entrance was located roughly in the centre. A part of this gate survives today, at the end of Daskalogianni Street. Nowadays, the arsenals are often put to new uses. The impressive Moro, which was restored between 2009 and 2010, is the headquarters of the Sailing Club of Chania, as well as one of the most significant cultural spots of the city. It frequently hosts exhibitions, performances, workshops, film screenings etc.