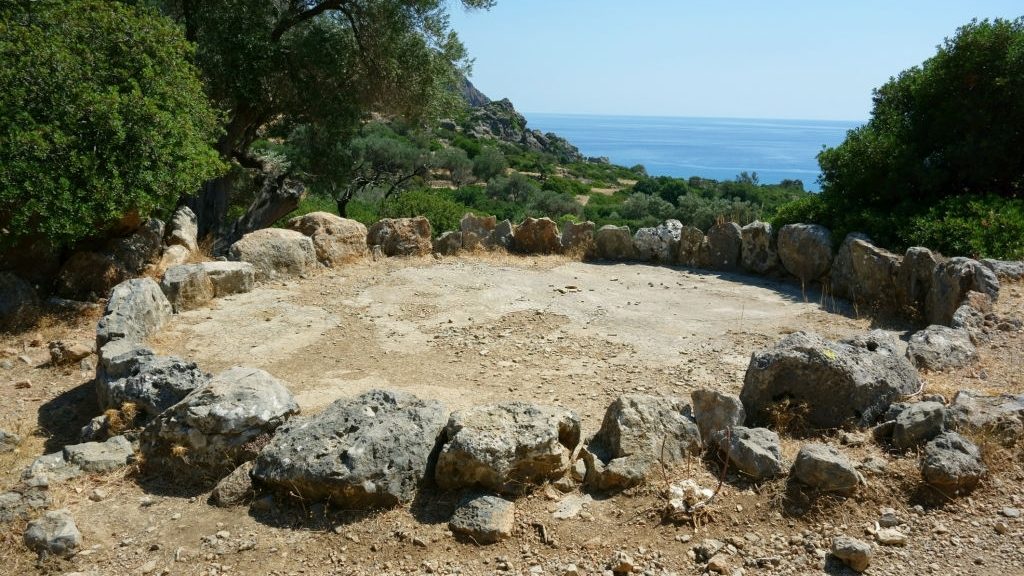 Lebena (Levin) was a wealthy ancient town, located at the southern foot of the Asterousia mountains, on the shore where the current settlement of Lentas is found. It was a port of Gortyn, and famous for its Asklepieion (healing temple) which was visited by worshippers from all over Crete and Libya.

The name Lebenais is probably of Phoenician origin (labi = lion) and was inspired by the way the peninsula west of it, resembles a lion’s head. The area was first inhabited during the Final Neolithic years. Considering the numerous archaeological finds discovered in the Proto-Minoan graves which were excavated in the area, a settlement flourished there in the Proto-Minoan period. It seems that this earlier settlement had already established trading relationships with Egypt, the East and the Cyclades. The town, however, reached its peak during the Hellenistic and mainly the Roman years, when Gortyn rose to be the most powerful city of Crete. Lebena was its port, and also the place chosen by the Gortynians to establish a sanctuary of Asklepios, in the 4th century BC. This was similar to the Asklepieion of Epidaurus in the Peloponnese. This sanctuary, where Asklepios and Hygeia were worshipped, was built at a therapeutic thermal spring. It was a famous centre for hydrotherapy and physiotherapy, and it also functioned as a sanatorium.

In the mid 1st century AD, the area was shaken by a massive earthquake, which utterly destroyed the sanctuary and a large section of the town. It is mentioned that the shoreline changed and the sea retreated more than 1 kilometre (7 stadia = 1.296,05 metres). However, the town was rebuilt and continued to be a very important trade centre, for several centuries. During the First Byzantine period, two noteworthy basilicas were erected in Lebena, traces of which can be seen today. The settlements in the area were deserted as a result of the continuous pirate raids that took place during the 7th century AD, a precursor of the subsequent Arab occupation.

The area does not have an organised archaeological site, however, traces of its past are clearly visible in and around the present-day settlement of Lentas. The Asklepieion, which was built on a man-made platform, with a majestic stairway leading onto it, stands out among them. The platform was covered with marble slabs, and its perimeter was decorated with mosaics. The surviving walls of the temple were built with bricks and were covered with white marble. Two tall marble columns can also be seen, and a 6-metre long base, which held the statues of Asklepios and Hygeia, is preserved at the western wall. Unfortunately, the statues were destroyed several decades ago, by local peasants who believed that a treasure was hidden inside.

North of the sanctuary there was a large gallery (stoa) in which the quarters of the priests and the avaton (= holy place or room where access was restricted or forbidden) of the sanctuary possibly existed. Only inpatients could enter the avaton, and they did so only to sleep.  This was part of their treatment plan, and it was believed that after a deep night’s sleep here, they would have therapeutic dreams and wake up with their health restored.

A fountain was found at the eastern side of the sanctuary; it probably marked the middle section of an earlier structure of the sanctuary and the location of the therapeutic spring over which the fountain was built. Another important archaeological find is the treasury, which is situated at the western gallery of the sanctuary. Underneath the floor, another mosaic floor was found, divided into two sections. One section depicts a seahorse framed by a repeated spiral design, and the other one represents two palm trees. This floor safeguarded an underground crypt, which was sealed by a covering with a lock. This covering was found inside the crypt, broken, possibly vandalised by looters of the Late Roman period or the Byzantine years. According to an inscription, all the offerings dedicated to god Asklepios were kept inside this crypt.

An Early Byzantine basilica of the 5th or the 6th century AD was unearthed east of the Asklepieion. It had three aisles, a wooden roof and a narthex. The materials used for the construction came from buildings of the Hellenistic and Roman period. The basilica itself was initially built in the mid 5th century AD, destroyed in the mid 6th century and then rebuilt, in the same size and form.