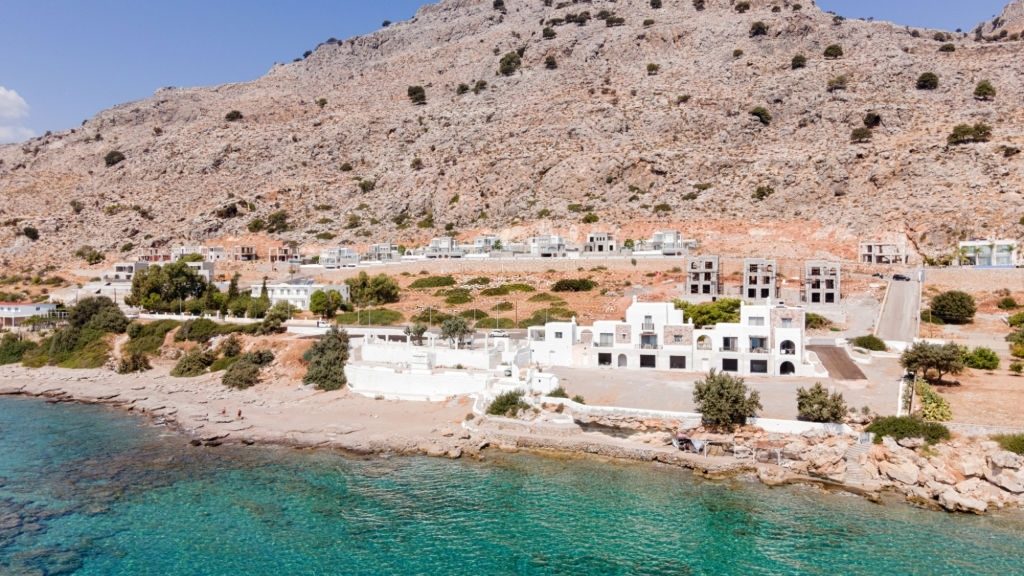 The small village of Dafni in Eastern Crete, just 27 km away from Sitia is the starting point of the next part of the E4 trail in Crete. The village of Dafni, named after the laurel tree was inhabited during the Venetian and Ottoman occupation of the island and currently has a population of less than 100 people.

The route from Dafni to Pefki

We set off at the Dafni village square (1) in a southerly direction. We pass next to the cemetery and take a dirt road that goes left (eastwards), parallel to a steep slope.

Approximately 900 m after the village, at the end of the steep slope, we leave the dirt road and take a vague path (2), in a rather south-easterly direction. After approximately 700 m, we come upon another unsurfaced road (3), which we follow southwards. We ignore a left-hand turn-off and continue southwards for about 1.000 m. We then leave the dirt road and follow a path (4) which is not clear, in a due southerly direction. We walk for 700 m, to a flat area where the beginning of a small gorge (5) can be seen.

Next, we walk along the bed of the gorge for approximately 1.000 m; we then leave it and take the rough footpath, walking on its western side, where a characteristic fig tree can be seen, at the entrance of Vreiko cave (6). To explore the entire cave, proper equipment like ropes and headlamps will probably be needed.

From the cave onward we walk on a clear path. After approximately 250 m we reach a parking area (7) and an asphalt road, which we follow for about 150 m; we then turn right into a dirt road that leads us to the northern side of a characteristic rocky summit (8), on top of which there is a picturesque chapel.

From the northern side of this rock, we follow the easily distinguishable footpath that meanders on its eastern side; after approximately 1.000, we arrive at the village of Pefki (9).

From Pefki you can also take the route through the gorge that leads to the coastal settlement of Makrygialos.