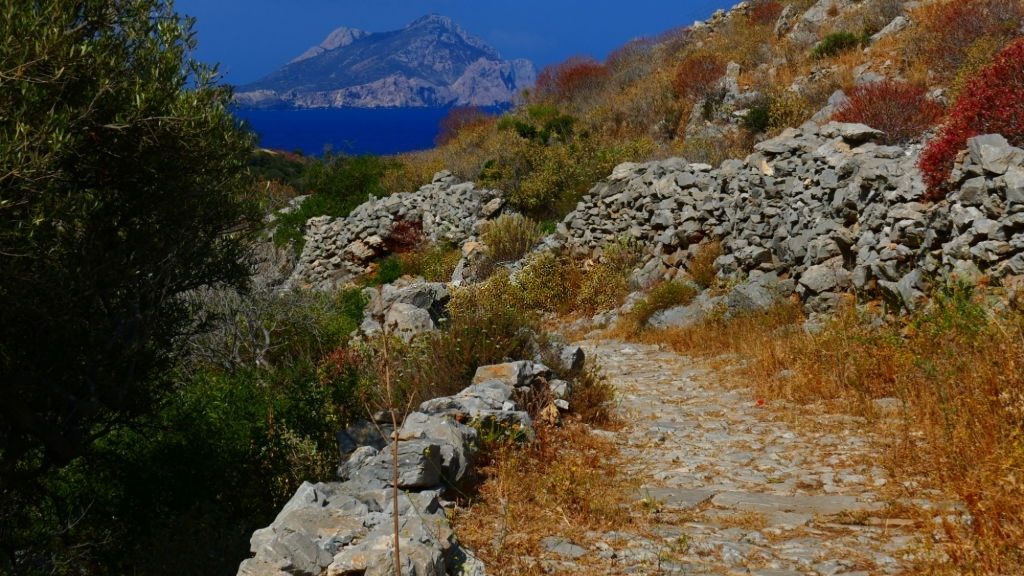 This part of the E4 trail in Crete starts just outside the Monastery of Panagia Vriomeni (only 14 km away from Ierapetra to the north). It then crosses parallel through to the village of Vassiliki that was named after a nearby Minoan settlement, from which significant pottery findings have so far been recovered. The monastery is not active anymore but a service and celebratory feast take place on August 15th, one of the biggest Greek holidays in honour of the Dormition of the Virgin Mary.

The route from Vriomeni Monastery to Vassiliki

We start by bypassing the Monastery of Vriomeni on its northern side. Having passed a small stone building on our right, we follow the dirt road north-east, climbing up a bare slope. We continue for approximately 600 m; we ignore a left-hand side road (1) and immediately after pass through the southern side of a small plateau with vineyards, 500 m east of which there is a left-hand turn-off (2) that we ignore. We continue straight on, in a southerly direction.

We then bypass a low peak on its southern side and follow the main dirt road which meanders on the slope. Cultivated terraces, almond trees and scattered farmhouses can be seen on our left, at a location called Langada (3). We ignore any turn-offs that we come to and head towards the eastern side of a small flat area with vineyards, located on the lowest part of the slope. At the foot of the slope, there is a drinking fountain. From the Monastery of Panagia Vriomeni to this flat area and the small agricultural settlement of Langada the distance is approximately 2 km in total.

We leave the flat area and continue straight towards the east, along the slope, to the south we can see the area surrounding Ierapetra. In about 1 km, we ignore a right-hand downhill side road (4). We continue for another 1.3 km and we follow a left turn-off (5). We then descend towards the small valley of Assari, where a chapel can be seen. There is also an old stone drinking fountain and the ruins of buildings that used to be part of the old Dependency of the Faneromeni Monastery (6). Once we are in the valley, we follow a dirt road to the right, initially in a southerly and then an easterly direction, parallel to a small watercourse.

Still following an easterly direction, we leave the valley behind and pass by a small plateau with a few olive trees here and there. We continue straight on and reach the northern side of a bare hill, having now a dry watercourse down below to our left. Reaching the flat hilltop (2,5 km from Assari), the distant view of the gorge of Ha opens up eastwards ahead of us, as well as of the Cretan Sea, northwards. We ignore a northern turn-off (7) and continue on the main unsurfaced road, initially southwards and then north-eastwards, heading to Vassiliki (8).