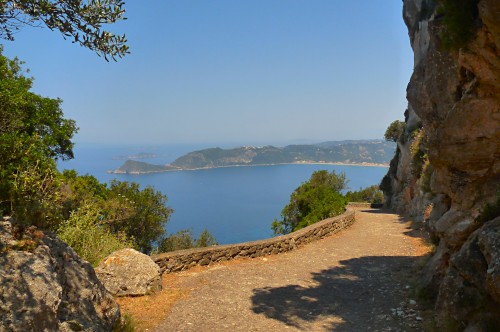 This is a short E4 hike from the village of Kato Metochi to Agios Georgios, both situated in the stunning Lassithi Plateau and with beautiful countryside Cretan landscapes. Kato Metochi was used extensively during the Venetian occupation for cultivation, and seasonal makeshift houses would have been established for the workers. In recent years, the permanent population is ever decreasing and is close to 80.

The nearby villages are Agios Xaralampos, Kaminaki, Avrakontes and Magoulas. One popular attraction in the area is the Diktaion Andron or cave, famous as a possible birthplace for the Olympian god, Zeus. In addition to its mythological associations, the cave was a worship place between the late Minoan period and the Romans. You can reach the cave on foot through the ancient hiking path that takes about 30 an hour, with some breaks to enjoy the view. There are also stunning stalagmite and stalactites formations present.

The E4 route from Kato Metochi to Agios Georgios

After the Kato Metochi village square, at the south-eastern exit of the village (1), we leave the asphalt road and enter a dirt road on our left, which passes through the plateau, among cultivated fields. We continue straight on, in a south-easterly direction. After 1.000 m we bypass the settlement of Agios Charalambos (2) to the north. A burial cave, Gerontomouri, was discovered here in 1976 and excavations are still in process.

We then turn southwards and walk straight on the dirt road for approximately 1,3 km, ignoring any turn-offs that we come by (which are quite a few), until we reach the main road, at the western exit of the village of Psychro (3), south of which the famous Dictaean Cave is to be found. From the village, the cave is only a short hike away, for those interested in exploring it.

Afterwards, and having passed through the centre of Psychro, we turn left (4) just before its eastern exit and follow an unsurfaced road straight on. This dirt road, which crosses the southern part of the plateau in a due easterly direction, after 2,7 km, leads us to Agios Georgios (5).