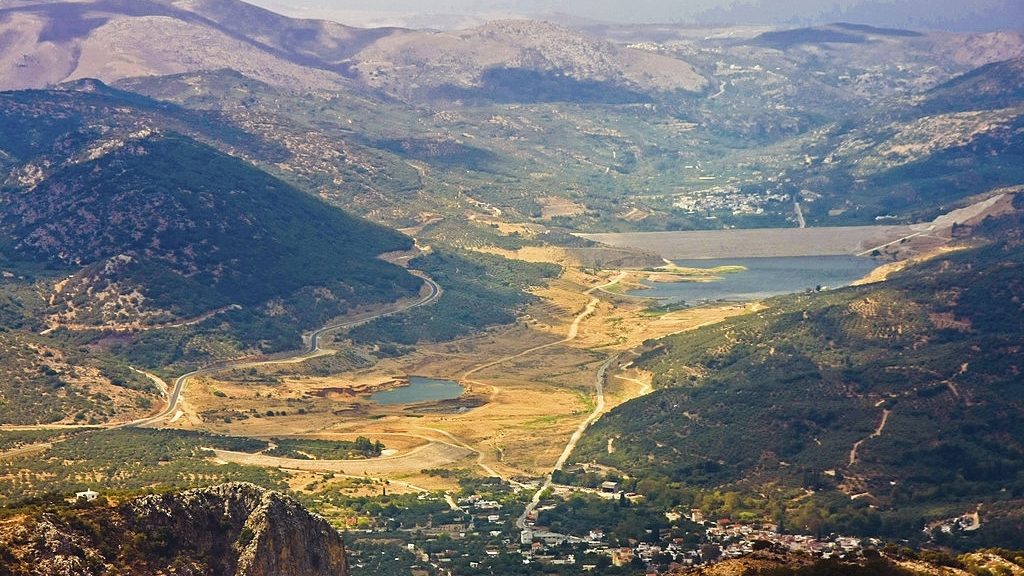 This route passes through picturesque villages and the Lassithi Plateau, which is the largest of Crete island. It is also famous for its characteristic windmills and the Dictaean Cave, where the Olympian Greek god Zeus is said to have been born.

Starting from Hersonissos, we take the road that leads towards Kasteli. We pass by a golf course on our right and then continue on the road that goes to Avdou in an easterly direction. We drive through the beautiful valley of Potamia, pass by the dam of the river Aposelemis and then arrive at Avdou. In summer, the picturesque village of Avdou is full of life, thanks to the numerous cultural events that take place in its square. You will also have the possibility to visit the Byzantine churches of the village and the cave of Agia Fotini. After Avdou and the village of Gonies, we continue on a road which winds up the western slopes of Mount Dikti. If you wish, you can also stop for a visit to Krassi, a beautiful village with a traditional fountain and a huge, age-old plane tree.

We then return to the main road and continue as far as Kere, a small village with a lovely view over the valley of Avdou. The village was named after the Kera Monastery, which is well-known for its remarkable Byzantine paintings. The peak of Karfi, where the ruins of a Late Minoan settlement are to be found, prevails above the village. We continue driving uphill as far as the Ambelos saddle, which is also the entrance point to the magnificent Lassithi plateau. On top of Ambelos, we see the first characteristic stone-built windmills. Traces of an ancient footpath, which once linked the plateau with Avdou valley, can be seen on the slope, on our right-hand side. The Lassithi plateau, situated at an altitude of 850 metres, is the largest plateau of Crete and the only one which is inhabited throughout the year. It is surrounded by the impressive summits of Dikti; among them, the peak of Spathi which, with its imposing vertical cliffs, dominates the landscape to the south-east.

Stockbreeding and agriculture have been the main occupation of the residents of the plateau since antiquity; this was after all the reason these locations were chosen to build their villages. Nowadays, this great polje (= plateau created by the erosion of limestone) of the Dikti massif is an extensive tract of arable land, growing fruit and vegetables. The Lassithi plateau was one of the most extensive traditional “wind farms”, typical for its characteristic windmills; up until a few years ago, there were more than 10.000 mills. Unfortunately, this is now a thing of the past, even though the ruins that can still be seen prove their former glory.

The Dictaean Cave (Dikeon Andron) which was famous even in antiquity, is located on a slope above the village of Psychro; the worship of Zeus war particularly common in the ara. The cave has two main chambers, and it is known for its magnificent decoration. Indeed, it is considered one of the most prominent caves of Crete, for both the mythology that is linked with it and its geological importance. From the entrance of the cave, one can enjoy a panoramic view of the verdant plateau, and the peaks that surround it. At the village of Tzermiado, you can attend the famous Potato Festival, which is held here every summer; the Lassίthi plateau area is known for its production of excellent potatoes. One can also visit the Trapeza Cave, which is quite important, and the smaller plateau of Nissimos whence the path that leads to the summit of Karfi begins. At Moni Kroustalenias next to Agios Konstantinos village, there is a road which leads towards Agios Nikolaos, to the north-east.

We carry on, passing through a bare mountainous landscape until we reach the valley of Potamoi which has several small picturesque villages. Once we arrive at Vrisses village, the valley of Neapoli opens up ahead of us. From this valley, we have the option to return to Malia and Hersonissos. If we take the Old National Road we reach the village of Vrakhasi, which has a lovely view of the northern slopes of Selena, one of the summits of Mount Dikti.