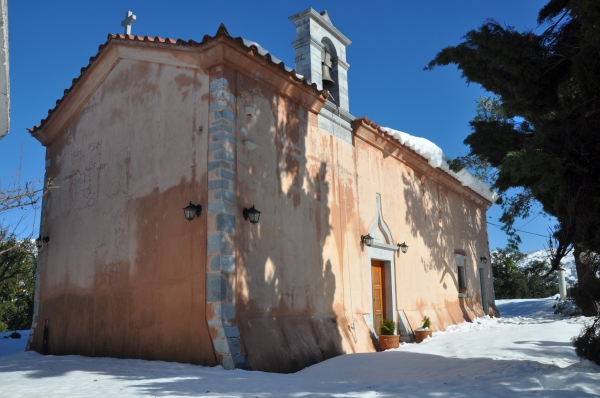 The monastery of Panagia Kroustallenia is perched on a rock overgrown with trees that rises to a height of 15 m above the Lassithi plain. Built at an altitude of 850 m, in one of the most beautiful locations on the plateau, it offers stunning views of the surrounding area.

The monastery is dedicated to the Virgin Mary, like most monasteries found on Crete island and is very old. However, it is not known by whom and the exact date it was founded, although it must have existed since the Second Byzantine period of Crete (961-1204). Its history is closely linked to the history of the Lassithi plateau itself and according to some sources, it was a gathering place for rebels against the Venetians. From 1293-1543, however, the Venetians decided to desert the plateau precisely because it was a centre of revolutionary action, so logically, the monastery must have been abandoned.

A new page in the history of Panagia Kroustallenia started in 1543 when it was renovated by the nun Palantia who came to Crete together with other Peloponnesian refugees. Then, with the conquest of Crete by the Turks, male monks settled here and the monastery continued its revolutionary action, for which it was punished with huge damages and looting during the revolution of 1821. Nevertheless, in 1866 it was the headquarters of the rebel forces and at the same time, the first school on the plateau operated on its site. Unfortunately, the catastrophe of 1867 altered its old architectural character to the point that today’s buildings bear no resemblance to its old form. Most of what is visible today was built afterwards. The monastery of Panagia Kroustallenia has long been one of the most hospitable monasteries to visit and has a guesthouse that is open to foreign and local travellers that arrive in the area. The area is full of hiking trails and cultural attractions and the E4 European long-distance trail also crosses through this area.