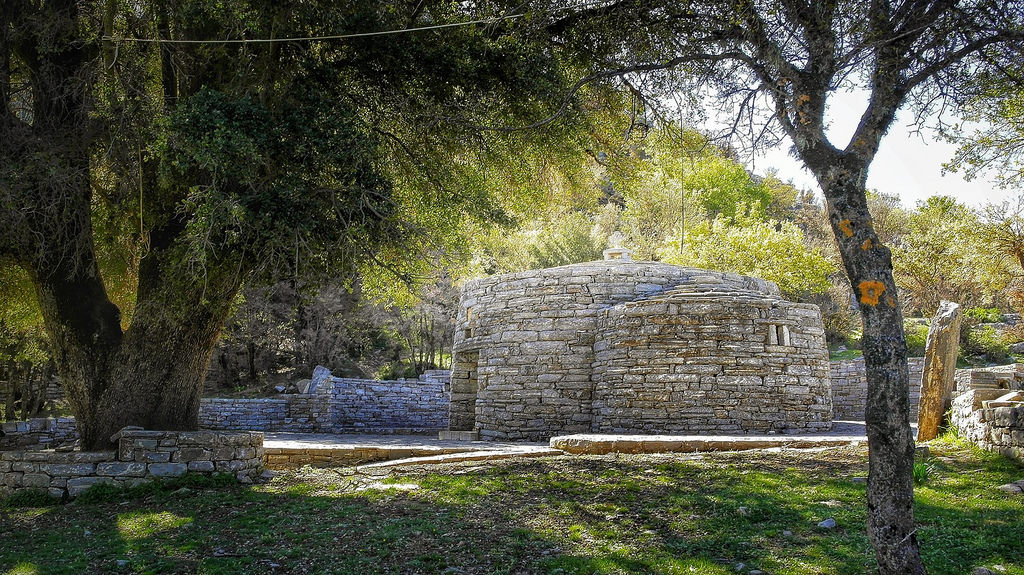 Anogia is one of the most famous Cretan villages and a popular choice for weekend escapes from the capital, Heraklion. In the winter, the area is often covered in white and the small tavernas offer great hearty dishes to tired travellers. On the northern edge of mount Psiloritis at a height of 750 m, this will be the starting point as you traverse south towards the plateau of Zominthos. A Minoan settlement is still excavated on this location and the area was of significant spiritual importance. It was probably abandoned due to its mountainous and isolated location.

The E4 route from Anogia to Zominthos

South of Perachori (1), a settlement of the Anogia area, an uphill path begins; it passes by the church of Agios Nektarios, then crosses through a small thicket of pines and cypresses and leads up to the hilltop (2).

From the ridge, the footpath descends towards the bare valley. There is a stream (3) down below; after crossing it, we climb again for a while, until we reach a second ridge (4).

A low peak is on our right side, where a stone hut can be seen. We cross the dirt road which goes along the ridge and descends again to a dry watercourse (5), which we cross. We then enter a gully and follow it in a slightly south-westerly direction. The footpath passes through an area with low, sparse vegetation, which then begins to thicken, little by little. After 800 m, we cross a dirt road (6) and continue hiking up the gully, slightly south-westerly, for another 350 m, until we get to a small plateau (7).

We continue south on the indistinct path for 200 m and then come to a dirt road, which we follow for 400 m. We continue on the path, still following the gully in a southerly direction until we get to the Trygiodo water spring (8). There is a cistern where spring water is collected in the dry summer months. During this period the quality of water is unsuitable for drinking. An unsurfaced road begins at the spring, which after approximately 200 m meets the main dirt road (9); we follow its southern branch straight on.

After 1.000 m, and having passed through a small plateau, we arrive at a small saddle, on the right side of which a stone wall and the distinctive circular chapel of Agios Yakinthos (10) can be seen. The area around the chapel, which has the form of a traditional mitato (a traditional mountain hut used for storage and shelter), was made so as to be able to host the Yakintheia. This is an annual cultural festival which is organized by the famous poet, songwriter and singer Loudovίkos ton Anogion (Loudovίkos from Anogia).

The route from the Trygiodo spring up to this point is one of the most beautiful on Psilorίtis, especially in the springtime. From Agios Yakinthos, the dirt road leads us eastwards, to the valley of Zominthos, where after 2,2 km we come to the main road (11) which connects Anogia to Nida.

Alternatively, we cross the peak which stands south of Agios Yakinthos and then descend to the small valley.

There, we once again reach the old footpath, which leads us south and climbs to the top of the hill; the small mountain shelter (12) of the Municipality of Anogia is found there, in an area named Vroulidia. From the shelter, we follow the dirt road in a north-easterly direction and reach the valley of Zominthos.