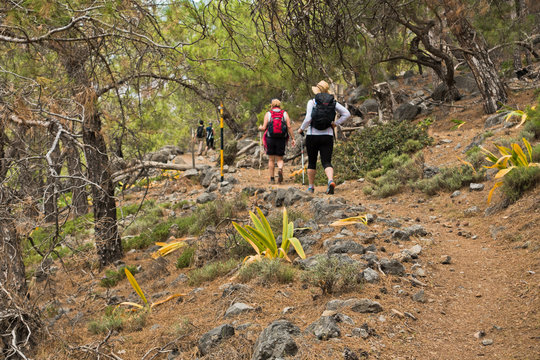 This part of the E4 trail starts at Domata beach on the southern coast of Crete island, east of Sougia, and south of Samaria National Park. To reach the beach you will have to walk through Poikilassos from Sougia and cross picturesque bays and beautiful remote beaches. The only other access is by boat. This is a challenging but rewarding trail and you will most probably have the beach and surrounding area all to yourself, especially in the offseason.

The E4 route from Domata beach to Agia Roumeli

On the east side, after we pass the beach of Domata, we see a steep little path which we ascend to the foot of the rock. At the end of this difficult climb, there is a well with non-drinkable water. From this point on, we climb between pine trees, following the edge of the cliff which opens up briefly to our left. As we move away from the bluff to go eastwards, the pine trees begin to thin and we encounter an even, scrub-covered area, at an altitude of 200 m. Behind us, in the distance, we can see the area of Sougia and of ancient Lissos.

We continue uphill to an altitude of approximately 400 m, where once again we are in a pine-covered area. Far away to the north, the steep slopes of Volakias, one of the most impressive peaks of Lefka Ori, appear. At this point, the path descends to the bed of a stream (2). After crossing the stream, a steep path winds between the pine trees and leads to a left branch of the path. We continue uphill to the right, until a hill (3) (altitude: about 500 m), and then we begin to descend smoothly on the clear path, between pine trees. We arrive at a small stream, which we follow for a few meters, and then move onto its eastern bank. As we continue our descent we can see the bay of Agia Roumeli and the beach of Agios Pavlos stretch out, in the distance.

From this point, we begin to descend a very steep slope. The route marking is quite good; this fact, combined with the constant visual contact that we have with the coastal settlement of Agia Roumeli, helps us orientate ourselves. As we descend, we see the bay and the beach stretch out, down below. At the point where the pine trees begin to thin out and we pass by a steep cut in the rock on our right, the path heads east along the rocky slope, with small ups and downs. After passing below the edge of a rock with cave formations, we arrive at a small clump of pine trees, just above the coastal village of Agia Roumeli (4).

The settlement has developed rapidly in recent years due to the large number of visitors passing through the gorge of Samaria. It is built on the shore of the bay of Agia Roumeli, where the ancient city of Tarra used to be.