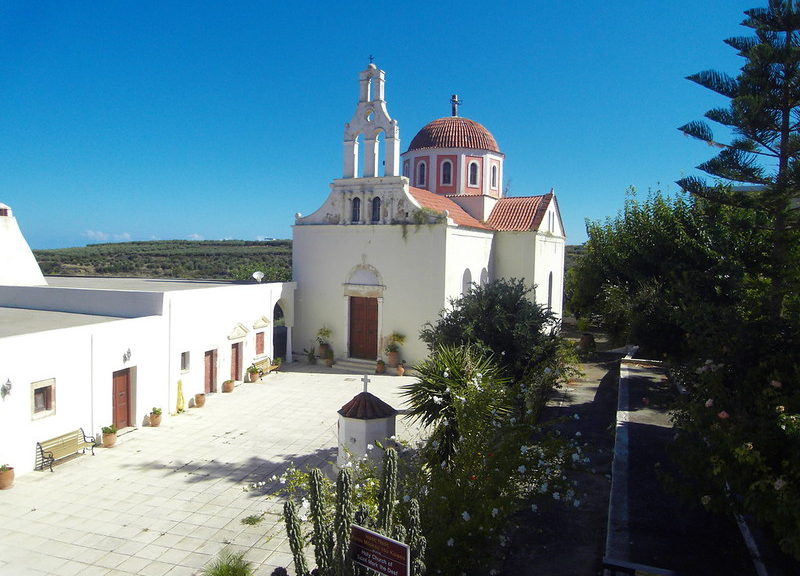 The Monastery of Saint George of Arsani is an old men’s monastery, located 12km east of Rethymno, in the Pangalochori community, possibly founded during the 2nd Byzantine period (961-1204). It was founded by a monk named Arsenios, after whom it was named.

According to the most likely version of events, it was deserted at one point due to pirates causing problems to the coastal settlements and, like many other Cretan monasteries, it was rebuilt before 1600. The Church of Agios Georgios, the Catholicon of the Monastery, a cruciform domed basilica, was inaugurated during the late 16th century.

The great earthquake of 1856 destroyed a large part of the monastery and a decade later, the monks allowed the property to be used as a refuge and a centre of liberation during the Cretan revolt of 1866 – 1869. During the final Cretan revolution (1897-1898), the monastery of Arsani suffered greatly and the Abbot Gabriel Klados was violently killed by the Ottomans. This was the final contribution of the monastery to the war effort shortly before the liberation of Crete. The next landmark in the history of the monastery came in 1941 when the Germans executed monk Damianos Kallergis for fostering rebels. The monastery was restored and extensively renovated in the early 1970s, with the addition of murals to the church and the construction of the museum and conference centre.

The Monastery of Arsaniou is located not far from the most famous monastery on the island, the Monastery of Arkadi. Another popular attraction in the area is the archaeological site of Elefterna. Its ruins were brought to light after systematic excavations starting in 1984 and it is considered one of the most prominent ancient city-states of Crete. Considering the Early and Late Minoan pottery that was found, as well as the various remnants of buildings that can be seen, the area must have been inhabited since 2000 BC. Of course, being so close to the coast, there are countless bays and beaches where you can stop to relax for a swim and something to eat. The seaside village of Bali is located less than 20 km to the east.