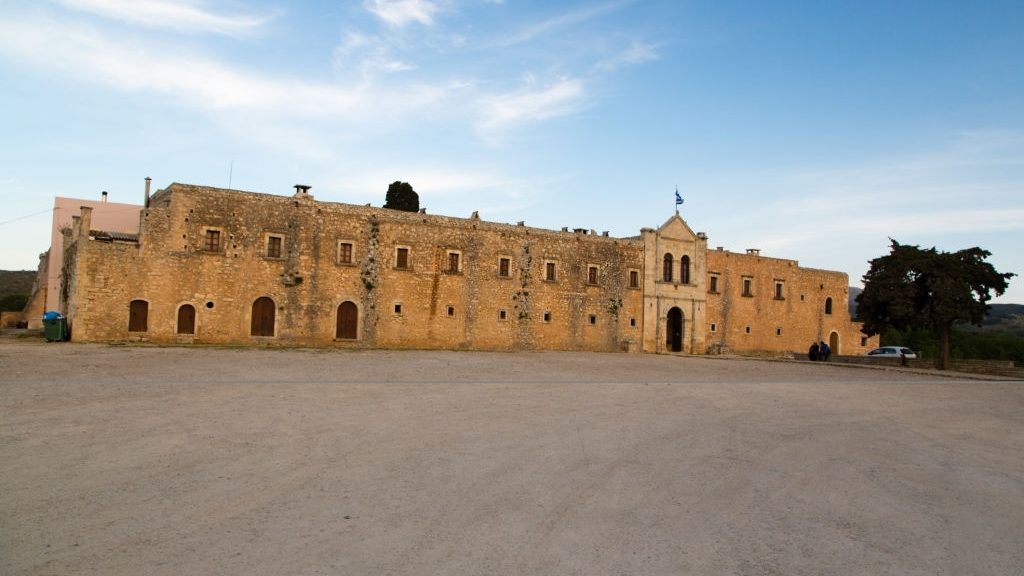 The Monastery of Arkadi is perhaps the best-known on Crete island due to its striking design and the historical significance of the tragic events that took place in the Holocaust of 1866. However, its location and impressive architecture make it all the more special.

It is a large fortified complex built during the end of the period of Venetian rule. Apart from the monks’ cells, the central building also includes warehouses, premises for processing agricultural products, as well as stables. The impressive two-aisled church, dedicated to Saint Constantine and Saint Helen and the Transfiguration of the Saviour, is one of the most important architectural monuments of the Cretan Renaissance. It was completed in 1587 and its facade demonstrates the penetration of western architectural trends in 16th and 17th-century Crete. The history of the monastery begins during the Byzantine Empire. From the 16th century onwards, the monastery was a major intellectual centre.

In November 1866, Ottoman armies laid siege to the monastery, where 700 women and children and 260 Cretan warriors had barricaded themselves after the Abbot’s refusal to surrender. After a two-day siege, the women and children and the warriors, led by Constantinos Yiaboudakis, entered the gunpowder magazine, set it on fire and blew it up. This was considered a heroic act, sacrificing themselves but leading to the death of several Ottoman soldiers. The Holocaust of Arkadi is considered to be one of the most important in Cretan history and was the reason that Arkadi was designated by UNESCO as a European Freedom Monument.

The museum of the Arkadi Monastery houses a very remarkable collection of images from the post-Byzantine era, hierarchical vestments, weapons, handwritten codes and even personal belongings of the Abbot Gabriel. An important exhibit is also the wood-carved iconostasis of the Katholikon with a representation of the Resurrection, the only part that survived the burning of the monastery by the Turks. The banner of the holocaust bearing the representation of the Transfiguration of Christ is kept in a special display case. Finally, there is an extensive collection of weapons that includes, in addition to the well-known Kariophile, other Turkish weapons such as the Sisan.

The monastery is open to visitors and is located only 20 km from Rethymnon.