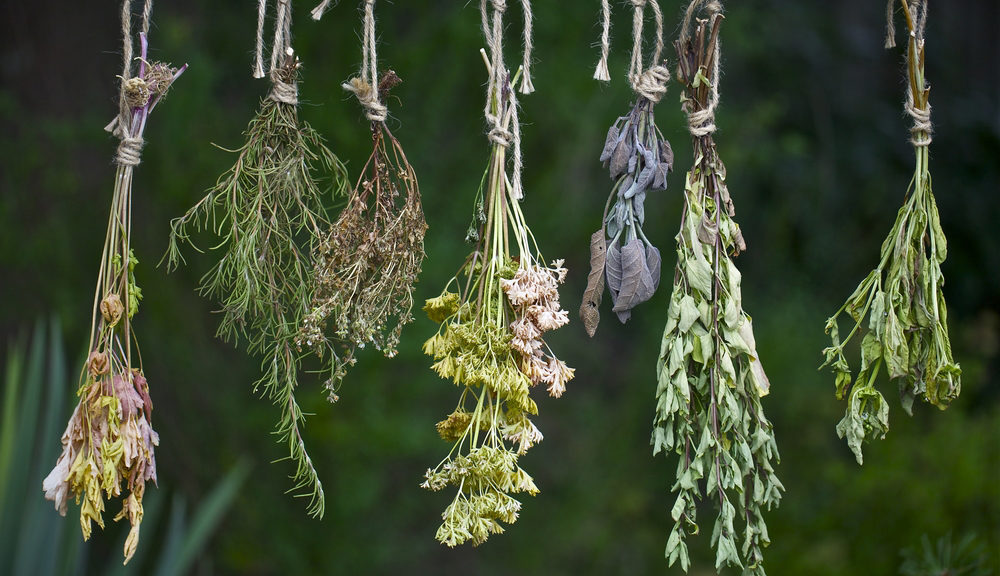 Botanical studies show that Crete has one of the richest and most interesting ecosystems in Europe, with a huge number of endemic (native only to Crete) plants. For example, Malotira (Siderites syriaca) and Diktamos (Oreganum dictamnus), the latter known in antiquity for its antiseptic properties.

Crete is rich in numerous such herbs utilized from the past for their medicinal properties. These herbs generally grow in the inland mountain ranges; they are harvested by experienced collectors, dried naturally and packaged in for later use without including further chemicals or other additives.

An endemic plant, also called erontas and stomachochorto, used since ancient times to stanch bleeding and in the treatment of wounds. It has a therapeutic effect on the stomach and its healing properties are mentioned by Hippocrates. Legend has it that wild animals, when injured, will rub the wound on the plant and that healing quickly follows. Growing only on steep slopes and cliffs, its harvesting can be dangerous. The plant flowers in the summer and is collected then.

A most popular herb, with an excellent and strong flavor. Used since antiquity for its properties as a tonic (a tea) but also to give flavor in cooking, mostly with meats. It flowers from May to June and has bright mauve-blue blossoms.

An endemic, with properties similar to thyme, it has been in use since antiquity to treat nervous disorders and considered ideal for managing colds. May be served with Malotira as a drink (vrastari – boiled). Also used in cooking and perfumery. Flowers in July and August, when it is also collected.

One of the most popular ‘mountain teas’, known throughout Greece. As a decoction, it is a diuretic and an antidote to colds. In Crete, the name Malotira was acquired in the Venetian period (Italian: male-illness + tirare-pull or drag). It grows in dry and barren places throughout the mountain ranges, where it is also an important fodder crop in the high Madara (= White Mountains: Madares being another name for the range). July is the month of its flowering, and collection.

A very popular herb, it gives a characteristic aromatic note to much of Mediterranean cuisine – especially with grilled meats, fish, salads and anything that includes feta cheese. In addition to its culinary aspect, it is used as an antiseptic, and a soothing agent for tooth and stomach aches. Amongst bee-keepers, it is a valued flowering plant – alongside thyme. It flourishes in stony and sunny places. The flowers are white, with a sweet and peppery scent. Oregano blooms in June and July and is collected then.

The blue-flowered variety of thyme often dominates, though in Crete a white version is known as well. Both are vital to the honey-producing business since the best quality honey is from thyme. In cooking, it is used as a dressing. In medicines, thyme has antiseptic, diuretic, anti-fever and anti-parasitic qualities. As an essential oil in natural cleaning products, it is often used in toothpaste. It blooms in June and July.

Throumba smells somewhat like thyme and rigani – and as both of the previous ones, it is a plant useful to the bees. An appetite stimulant, and often used in cooking, it also has pharmaceutical properties – eg. it acts as a sedative for rheumatic pains. It blooms from June to August.

Chamomile grows just about anywhere in Crete. With its distinctive taste, it is most widely used as a medicine – anti-inflammatory, anti-allergic, soothing (often used to soothe an upset stomach) and antiseptic. Normally it is taken as a tisane, by itself or with other Cretan herbs. A relaxant, it is an excellent remedy against insomnia. Collected from April to June, it is dried and used all year-round.

Rock rose or ladanum is a perennial aromatic shrub, with medicinal qualities. The stem and leaves contain a balmy resin (labdanum) with a strong scent; this resin is secreted by hairs on the leaves and is collected by a sort of rake pulled through the bushes. The resultant brown and malleable stuff is also used in liturgical contexts as an incense. Medicinally the resin has a strong antimicrobial quality and is used to soothe toothaches, tetanus and insomnia. With its seeds, the plant can be boiled to make tea, which helps when dealing with diarrhea. In Crete, it is regionally known as Wild Rose or Wild Sage. With its beautiful pink, and more rarely white, flowers it blooms from March to June.