Karteros beach is located right next to Heraklion airport, in a small bay that forms on its west side. This is about 7 km from the town itself and the beach is in total about 1 km long. It has soft sand, and shallow clean waters and is popular primarily with locals. It is organized in some places, where there are hotels and beach bars with a young clientele. Karteros, just like most other beaches on the northern coast of Heraklion, is exposed to the winds and as such can often form considerable waves when the wind blows. There are also frequent local buses that run between the city of Heraklion and Karteros. 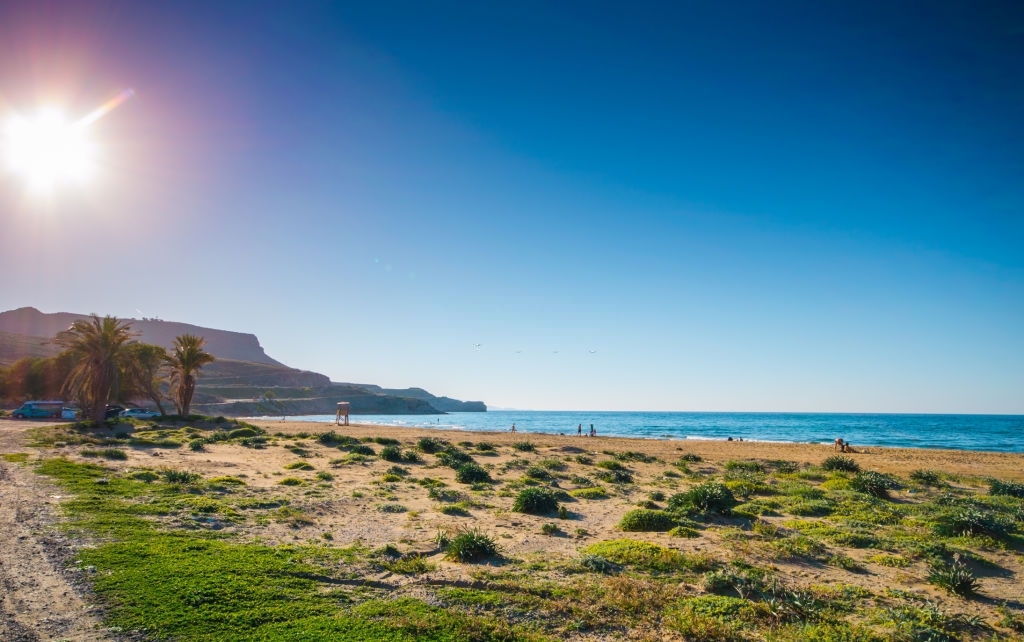 The name of the beach, Karteros, apparently comes from the Byzantine general Kraterus who landed here in 824 when he came to liberate Crete from the Arabs. The west part of the beach, often referred to as “Florida“, is usually less crowded and is where the river flows to meet the sea from Karteros Gorge. Here we find a taverna and a small military airbase; a great spot to sit and watch the sunset and the aircraft coming in. On the east side, which is one long continuous stretch for quite a few kilometres, we meet the beaches of Xenia, Amnissos, News Cafe, and Tobruk. This coastline is characterized by endless soft sand, lovely beach bars and gives you a range of options to choose from depending on your mood.

Being so close to the city of Heraklion, there are a ton of cultural and archaeological attractions in the area, starting with the palace of Knossos.

If you get the chance, don’t miss visiting the Palace of Knossos, of the most popular archaeological sites in Greece, after the Acropolis, to learn more about the Minoan way of life. Another popular option, especially for families with children is the CRETAquarium Thalasokosmos. Here you can observe sea creatures and plants, including rare species, such as the Caretta Caretta turtle. There are also the ruins of the ancient city of Amnisos just next to Karteros, where among other findings, researchers have uncovered a sanctuary that worshipped Zeus.