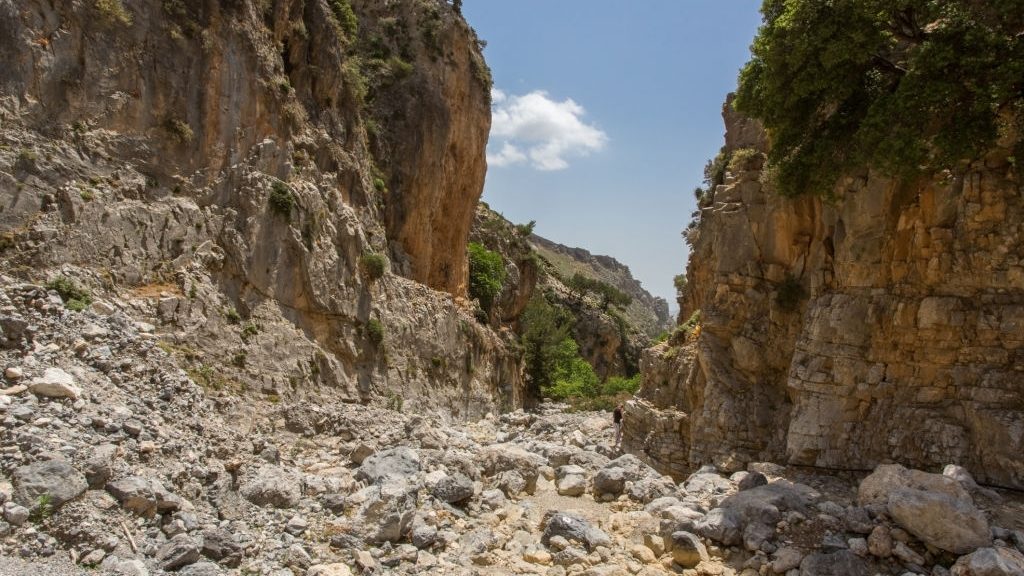 This part of the E4 trail in Crete starts at the plateau of Nida and follows a path through the forest of Rouvas and small gorges. Nida is the ancient name of the Psiloritis mountain range, highest in Crete and a sacred ground that was closely linked to the worship of Zeus. Here you will also find the cave of “Idaion Andron” on the west side of the plateau where legend has it the Greek Olympian god was born. This quite a long route, that will take you through the beautiful valleys, slopes, small churches and gorges of the area.

The E4 route from Nida to Rouvas

From the water spring of Analipsi, we descend to the main dirt road (1), which goes along the western side of the plateau of Nida and heads southwards, towards Poros tis Milias. We follow it for approximately 1.600 m, covering a big part of the plateau, until we come to a side road (2) with an easterly direction, on our left side, which leads us to the valley of Varsamos. We continue for about 2,2 km until we get deep into the valley and reach a point where the unsurfaced road branches off (3).

The left branch, after 250 m, leads us to a low peak; a mitato, (traditional mountain shelter) can also be found there. If we go southwards, straight up the slope from the point where the dirt road branches off, we will come across a lone tree and a small rock. Then after 200 m along the foot of the cut of the rock, we shall reach the water spring of Varsamos. From the point where the road branches off, we continue eastwards for approximately 2 km, until we reach the end of the dirt road, at a flat area named Ammoudara (4), at an altitude of 1.450 m. At the beginning of this flat area, on the right-hand -east- rock wall, a huge cave can be seen. We continue walking gently uphill towards the east until we reach a saddle.

We then begin to descend, following the bed of a dry watercourse through a small gorge, among tall vegetation. After approximately 900 m, we see a big cave-like hollow, high up on our right side, at the foot of a rocky slope (5). By now, the forest of Rouvas opens up ahead of us.

From this point on, the E4 signs on the tree trunks and the red marks on the rocks lead us south, following the contour of 1.150 m for about 900 m.

Getting out of the area of tall vegetation is quite tricky because it makes our orientation difficult. Make sure to follow the signs closely.