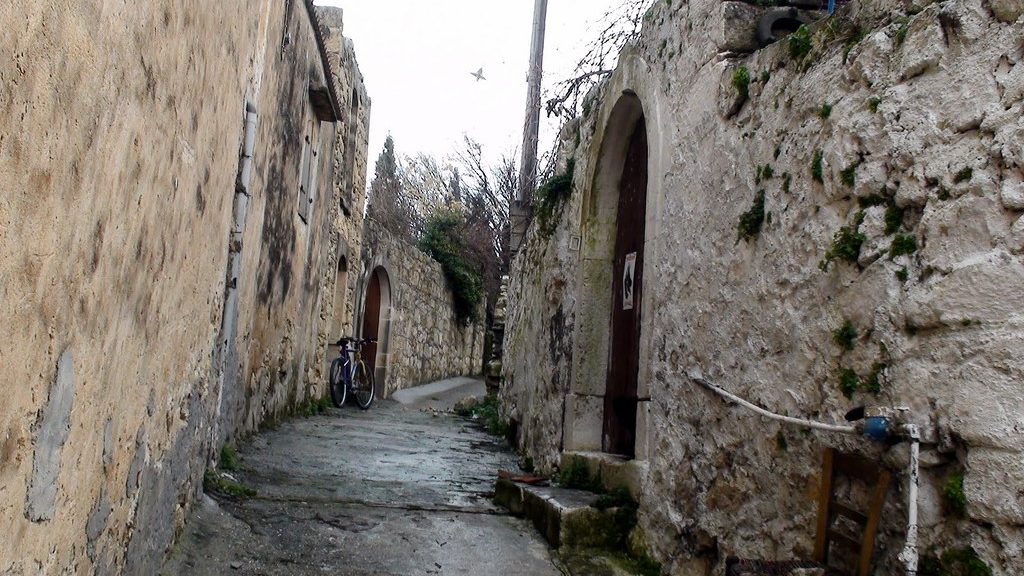 The village of Margarites is located on the northern part of Crete island, at a distance of 24 km from Rethymno. A small village, it is mostly known for its pottery makers which becomes evident straight away by the burst of colour and art on display all around. A unique village, showcasing the rich heritage and architectural beauty of the past, it is worth visiting and exploring in full. The path that leads to Choumeri village is relatively easy and can be done as a day hike.

The E4 route from Margarites to Houmeri

At the north-eastern exit of the village of Margarites, there is a small square (1) from which an uphill road begins, leading to the church of Metamorphosi tou Sotiros (Transfiguration of the Saviour). East of the church a dirt road begins; we take it in a southerly direction, passing through a landscape with cypress and olive trees. After approximately 400 m, we come to a right branch, which we ignore and continue straight on for another 400 m, to the small settlement of Pigouniana (2).

We pass through the almost abandoned settlement, following the eastern direction of the main road for 1,5 km, until we bypass the village of Orthes (3) on its southern side. At the eastern exit of the village, on our left, we come across an abandoned building with sculptures in its yard. We continue on the main road and arrive at the traditional village of Kalantare (4), which we bypass to the north and after 3 km we come to the Kalamas (5) settlement. From its northern entrance, where a drinking fountain and a shrine can be seen, we follow the signs along the narrow right-hand alley, which leads us to the Byzantine church of Agios Georgios.

From Kalamàs, we continue on the main road in a south-easterly direction; after 600 m we see a greenhouse on our left and an unsurfaced road (6), which we follow to the village of Pasalites (7). From Pasalites, we take a downhill road in a north-easterly direction, which after a few metres ends and a vague path begins. We continue on the footpath which goes down a ravine. After passing through the ravine, we climb the slope in a slightly south-easterly direction, among dry-stone walls. The vegetation of shrubs and carob trees is thick, so the path, as well as the markings, is by now very hard to discern. Continuing for 250 m from the ravine, we come to a dirt road which we follow to the right for about 1 km until we get to a right-hand branch. Left of this path, a stone hut can be distinguished under carob trees.

We continue straight on the dirt road until we come to a borehole and immediately after to a wider dirt road (8), which we follow to the left. A few metres further on, we come to a cement road; if we follow it to the left, it will lead us to the village of Ηoumeri (9), after approximately 700 m.