Crete > Museums of Crete > Archaeological and folklore Collection of Myrtos 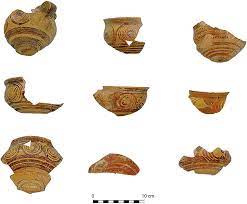 The Archeological and Folklore Collection of Myrtos is housed in a building donated by the Holy Diocese of Ieraptina and Sitia and has been operating since 2001.


One can see exhibits from the Early Minoan period that were discovered during the excavation on the hill of Fournos Koryfi, as well as exhibits from the Minoan mansion on the hill of Pyrgos. Many findings of the collection come from the Roman period from Myrtos. What stands out, however, is the collection of coins from the 3rd century until 1968. Finally, there is a room dedicated to the history of the village, mainly from the Second World War that includes weapons and ammunition exhibits.

The first settlement is an important Proto-Minoan settlement (2800 – 2200 BC) that was unearthed on the hill of Fournou Korifi, 3,5 kilometres east of Myrtos. The settlement was initially small, however, it subsequently grew. It consisted of a multitude of buildings and rooms with no urban planning, narrow alleys in between and walls painted with a reddish mortar. Ninety such rooms were uncovered during the excavations. Considering the workshops and the storerooms found containing significant pieces of pottery (Koumasa Style and Vassiliki Ware), as well as bronze daggers, seals, loom weights etc, it appears that the residents had developed an early form of craft industry (weaving, pottery etc).

The other settlement brought to light a Neopalatial villa on the hill of Pyrgos, on the eastern side of a river, opposite Myrtos.  Its architecture had a palatial quality; it featured a central, surfaced court with a processional walkway and a balcony with a view to the Libyan Sea. It was decorated with frescoes and had an indoor stairway that led to a second or possibly even to a third storey. The workshops and houses of the settlement were arranged around it.

The sites are open to visitors that wish to combine a visit of the museum with an excursion of the nearby area. Those interested in learning more about the Minoan civilization should definitely make a visit to the Archaeological Museum of Heraklion. Even if you are not a history and culture enthusiast, don’t miss out on the most important and world-famous archaeological sites of Knossos and Phaistos. But of course, there are other places of great archaeological significance and all periods of habitation in Crete, that can be visited.